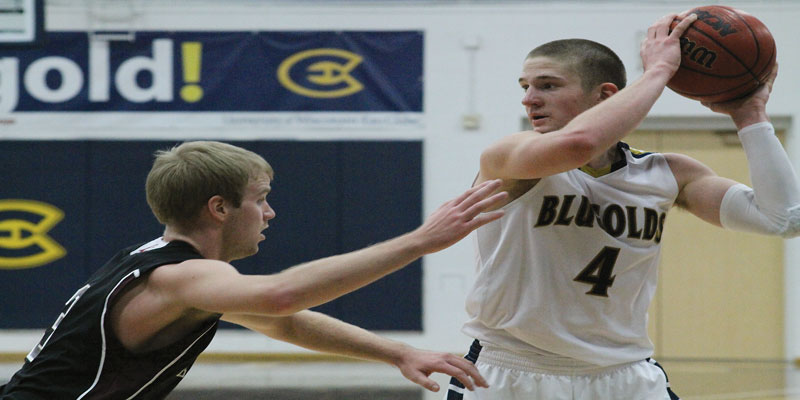 Over the past week, the UW-Eau Claire men’s basketball team had one of their players score 39 points in one game, endured a 45- minute game delay and battled through a hard-nosed defensive contest. The end result was a 1-1 conference game split.

In the River Falls game, sophomore Adam Hjelter scored a career-high 39 points en route to a Blugold victory. He said the game began with his first couple of shots feeling good off his hand, and from there he wanted to stay aggressive for the rest of the game.

“When I start getting my shot going it puts pressure on the defense because they can’t key in on one thing since I primarily get my points off jump shots and threes,” Hjelter said. “That opens it up for my other teammates to get to the paint because they won’t leave me.”

Getting into the paint was exactly what Eau Claire was able to do as the team shot 26 free throws and made 22. Hjelter said the team knows they are good at free-throw shooting, and he does not shy away from going to the line at big moments in the game.

“I always embrace that moment when it’s crunch time, especially with something like free throws,” Hjelter said.

Having the confidence to knock down free throws at the end of games is essential for any basketball team and head coach Matt Siverling said Hjelter is the team’s best free-throw shooter, and his players realize if they get him the ball he can close out games.

“He works at it and puts in the time,” Siverling said. “I think he is very confident in himself because he is in the gym all the time.”

With about nine minutes left to go in the game, Siverling said his team experienced something he had never encountered before. The fire alarm began to sound, and the game was stopped.

It is still unknown whether or not Hjelter’s hot shooting contributed to the fire alarms being set off, but what is known is the delay lasted about 45 minutes. Siverling said it was a distraction.

“The big thing was to stay loose and stay focused on what was taking place,” Siverling said. “Both teams had to go through some adversity, and it was going to be the team that came out and executed the best who was going to win the game.”

The Blugolds responded to their coach’s words by outscoring the Falcons 20-12 in the final nine minutes and went on to win the game.

Sophomore guard Eric Effertz said the game delay was crazy, but his team was able to overcome the situation by telling each other they were going to get the job done because they were not going to get back on the bus with a loss.

“It was great to get the win, and we strive for it every night so it is a good feeling and we hope we can feel that every night we play a game.”

The Blugolds will be back in action again at 7 p.m. Feb. 19 at UW-Platteville.