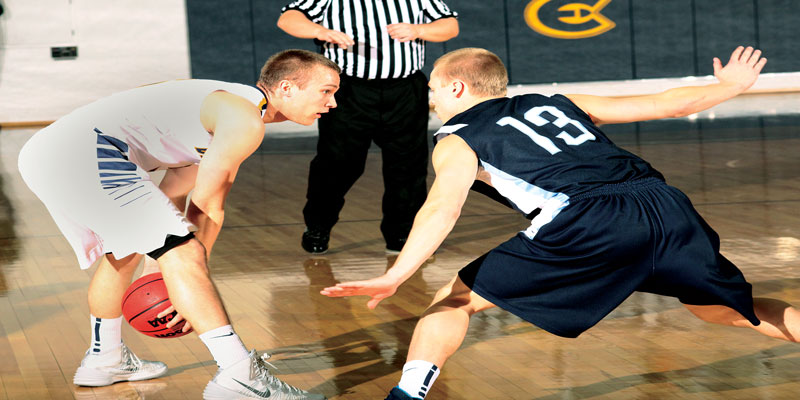 Sophomore guard Adam Hjelter handles the ball at the top of the key against UW-Stout Saturday afternoon.

After their game against UW-Oshkosh last week, UW-Eau Claire men’s basketball head coach Matt Siverling said he challenged his players to elevate their game the next time they stepped foot on the court.

For the first 10 minutes of the Blugolds’ game against UW-Stout Saturday, Siverling’s challenge was accepted. Eau Claire went shot for shot with Stout, but their effort ultimately wasn’t enough as the Blue Devils won 89-67.

Early in the game, Stout struggled to contain sophomore guard Adam Hjelter who hit his first three shots from behind the arc.

Siverling said Hjelter’s hot start sparked from their practice after their game with Oshkosh where he stressed to his team the importance of playing hard.

“We used Thursday’s practice as an eye-opening experience,” Siverling said. “We have been really focusing on what it means to be a Blugold and our expectations are high here and we will continue to get better.”

Eau Claire came within two points of the lead, but the Blue Devils responded with a 23-1 run, and Stout’s lead was too much to overcome.

“During that stretch I think there defense caused some turnovers, and we didn’t do a good job finding their shooters,” Siverling said. “They made some threes in that stretch that really broke our back.”

Stout shot 64 percent from the field compared to the Blugolds only making 46.9 percent of  their shots.

Siverling said Stout is a very good defensive basketball team, and they knew they would have trouble with their defense. But he thought his team would do a better job containing the Blue Devils’ offense.

“We didn’t expect them to come out and shot the ball the way they did,” Siverling said. “Anytime they can put that kind of defensive with that kind of offensive output then they are a very tough team to beat.”

Hjelter said he thought his team came out strong, but they struggled with their transition defense and that was the reason for the loss.

“I thought our scouting report was great,” Hjelter said. “They just came out and hit shots.”

Hjelter led the Blugolds offensively with 19 points and junior Lewis Mau added 14 points and fell one rebound short of a double double with nine boards.

For Stout, it was the two-headed monster of seniors Jimmy Whitehead and Alex Ohman who gave the Blugolds issues the entire night. Ohman scored a game-high 26 points, and Whitehead shot a perfect 8-8 from the field for 21 points.

The versatility and athleticism of Whitehead makes him extremely hard to difficult to defend, Siverling said.

“One on one he is almost impossible to stop,” Siverling said. “He brings a different element to their offense.”

Siverling said practices leading up to the game had been going well and his team is working on improving the areas they have been struggling in this season.

“I thought we’ve been working really hard in practice with coming out with intensity,” Siverling said.