Overcoming all the odds 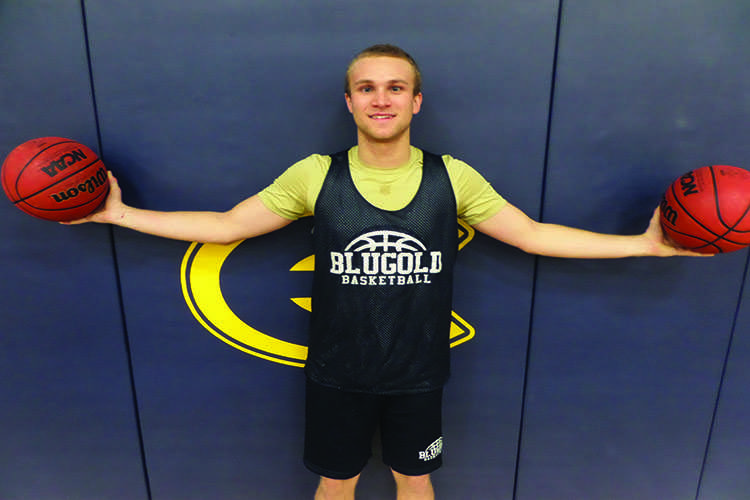 As Adam Hjelter lifted nearly 300 pounds above his shoulders, the six-foot-tall shooting guard heard a crack and immediately knew he had lifted too much.

“I completely blew out my back,” he said. “I was in excruciating pain.”

In his first week on the UW-Eau Claire campus, he would be sidelined for the entire 2012-2013 men’s basketball season. With one wrong lift, the star guard’s future became uncertain.

Hjelter was diagnosed with spondylolisthesis, which is defined as; “a slipping of vertebra that occurs, in most cases, at the base of the spine.”

Hjelter said his lowermost vertebrae is the one that slipped and that at times, “even standing up was unbearable.”

He quickly thought his career could be over, but with physical therapy and hard work he is again playing collegiate basketball, only a little more than a year after the injury.

“I had to rehab my back and stomach muscles enough to support my vertebrae, because if it slips any more it could end my career,” he said.

Nine months after suffering the injury, Hjelter was running again. Two months after that, he was getting ready to play his first game in a Blugolds’ uniform. And nine games into the current season, the transfer from UW-Superior leads a young Blugolds team in scoring, averaging 19.1 points per game.

While at Hutchinson High School (Minn.), Hjelter would spend countless hours shooting in the gym trying to perfect his game. He even struck up an unlikely friendship with a janitor to get more shots on the court.

Hjelter’s high school basketball coach, Dave Kucera, said in all his years of coaching varsity basketball he has never seen a player who works as hard as Hjelter.

“The kid has an extreme amount of passion for the game of basketball,” Kucera said. “I’ve never had anybody who has put the amount of hours into the game that he has.”

Hjelter said as a sophomore at Hutchinson, he did not have a great role in the basketball program. But because he loved the game so much, he put in the hours of gym time so he could excel at the varsity level.

Kucera said the amount of time Hjelter put in  during the season and off-season helped him excel his junior year.

“Adam is very competitive,” Kucera said. “School would open at 6 a.m. and he would show up at 5:30 in the morning to shoot, and he worked immensely on his shot. We would have practice after school then he’d go home have supper and return to the school to get more shots up, he would have the janitors open the gym for him.”

The next year, Hutchinson High School advanced to the state tournament with Hjelter at the helm. The team posted a 24-5 record during the regular season and made the tournament for the first time in 44 years.

Hjelter said he attributes his successes during high school to his dedication and love for the game.

“My passion is basketball,” he said. “When you have a passion and love for something so much, you do your all to be the best you can be. To be the best, you need to practice and train like the best.”

After scoring 15.5 points per game in his final season at Hutchinson, Hjelter was soon contacted by then UW-Superior head coach, Matt Siverling. Siverling said Hjelter was an interesting player to recruit because whenever he watched him, it was obvious there was something special about him.

“The way he played, and the way he went about things on the court, I could tell he was a competitor,” Siverling said. “That was one of the things I was drawn to initially, and one of the reasons I recruited him.”

When Siverling left Superior to become Eau Claire’s tenth head basketball coach in the spring of 2012, Hjelter, along with fellow guard Eric Effertz, both made the jump to Eau Claire following their freshman campaign to remain with Siverling.

“Those two guys I knew could really help us,” Siverling said. “That was one of the reasons when I came to Eau Claire, I wanted to make sure I gave those guys the option of coming with me.”

But Siverling had to wait a year to coach Hjelter again after his weight room incident. Marc Max, a financial advisor in Hutchinson, was one of Hjelter’s mentors in high school and knew Siverling wouldn’t have to wait forever to get No. 5 back on the court.

He said when he thinks about the type of person Hjelter is, he is not surprised he overcame the injury.

“The way that kid plays the game, it doesn’t surprise me he’s back already,” Max said. “But I’ll say one thing, I am quite surprised he is back so quickly. The severity of the injury makes me think there was an outside influence on his healing process.”

Many people who know Hjelter will tell you his passion and work ethic are unmatched. He might not be on his way to the NBA to play, but his post-collegiate dream is to someday coach in it.

“People have told me in the past I can’t make it to play college ball,” Hjelter said. “I’ve proven them wrong. A lot of people will tell me I can’t be an NBA coach. The sky is my limit and I won’t give up.”

But with three years of NCAA eligibility left, his focus now is playing the game he loves.

Picked by d3sports.com to finish in the bottom third of the WIAC conference, Hjelter is now preparing to put yet another doubt to rest as he and the Blugolds currently have a .500 record.

Hjelter said it would have been easier to forget about basketball completely and walk down another path after his injury.

“Because basketball is such an integral part of my life, I knew I couldn’t give up,” he said. “I had to end my game on my own note.”