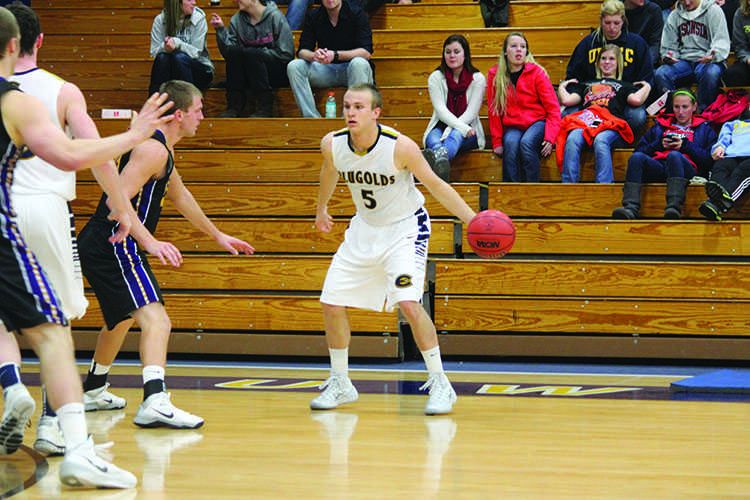 Hosting a top ranked team in the nation is always a unique opportunity regardless of what the scoreboard reads at the end of the night.

Head coach Matt Siverling said he thought there were several positives his team can take away from this game.

“I thought defensively we did a pretty good job the entire night taking away the things they are really good at, but they capitalized when we had some breakdowns,” Siverling said.

Playing a top-ranked team can be challenging for any team, and Siverling said playing a team like the Pointers shows his players how they are going to have to play every single night in the WIAC.

“Any time you have the No. 2 team in the nation coming into your building you learn what kind of competitiveness these guys have,” Siverling said.

The Pointers captured an early first half lead, but Eau Claire battled the entire half to keep the deficit under 15 points.

The Blugolds were able to cut the Pointers lead just nine points with two minutes left in the first half when a steal from junior Eric Effertz led to a pass up the court to sophomore guard Adam Hjelter, and Effertz was able to finish the play he started by laying the ball in on the fast break.

Siverling said he thought his team worked the offense well, but they just did not capitalize on the shots they needed.

“I thought we got tremendous looks,” Siverling said. “We took 20 threes and I would say 16 to 18 of those were good looks.”

Hjelter was able to hit most of his open looks on the night as he led the Blugolds in scoring with 19. He was also able to record three rebounds and two assists.

Moody said playing the Pointers was a good measuring stick for Eau Claire.

“We are really young team, and this was our first conference game, but we need to keep working and just keep getting better,” Moody said.

The Blugolds found a way to cut Stevens Point lead to ten in the second half, but they would not be able to shirk the gap any further as the Pointers went on to win by 19 points.

Prior to the matchup with the Pointers, Eau Claire split a pair of home contests as they first fell to Loras (Iowa) 77-64 on Nov. 26th and then were able to bounce back and defeat Crown College (Minn.) 87-73.

Hjelter led the Blugold offensive  attack against Crown with a career-high 34 points, 19 of which were in the second half.  He was efficient from the field scoring on 13 of his 18 shot attempts, and he also added seven rebounds and two assists.

Effertz scored 17 points and was only two rebounds away from a double-double as he finished with eight rebounds. He also recorded a team high four assists.

As a team the Blugolds shot 55.7 percent from the field and 14 of 25 from the three-point line.