For the Gillmans, it’s all in the family 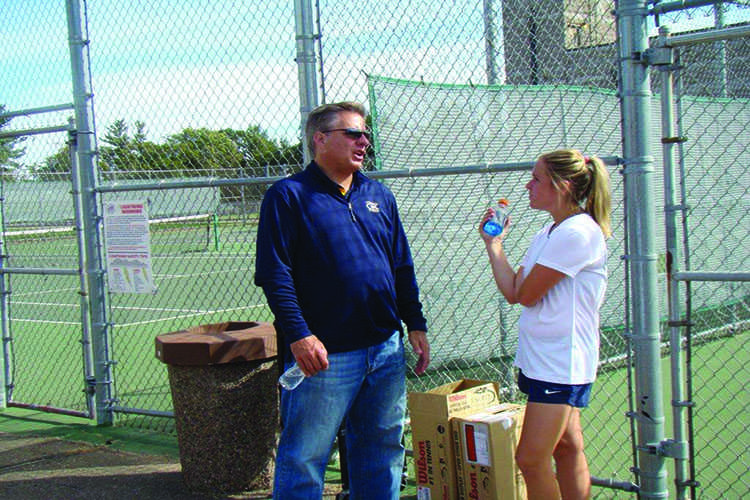 Throughout her career in athletics, her father, head coach of men’s and women’s tennis, Tom Gillman, has been by his daughter’s side.

“Through all my highlights in both high school and college, he has been right there with me,” Katie Gillman said.

Before arriving at Eau Claire, Katie Gillman played her high school tennis at Red Wing (Minn.) High School. Her career began in the seventh grade, as she was a letterwinner on the girl’s varsity tennis team. She went on to etch her name into the Red Wing girl’s tennis history book as she set the record for most career wins in the school’s history.

Like her collegiate career, her father served as her head coach during her high school career as well. Tom Gillman coached high school tennis in Red Wing for 15 years. He was also named the Eau Claire men’s head coach in 2001.

When Katie Gillman’s high school career came to an end and it was time for her to choose a university, she didn’t think she wanted to go to Eau Claire.

“At first, I didn’t even schedule a tour for Eau Claire,” Katie Gillman said.  “I wanted to branch out and do my own thing.”

Katie Gillman’s mother, as well as Tom Gillman’s wife, Theresa Gillman, said she wanted her daughter to look at as many different schools as possible and her husband helped introduce Katie Gillman to other WIAC schools.

“He was good at giving Katie lots of opportunities,” Theresa Gillman said. “He let her make the decision herself though.”

But after much thought, Katie Gillman decided to enroll at Eau Claire on her own. Weeks before her collegiate tennis career began, the coach who recruited her to play for the Blugolds decided to step down. Katie Gillman saw an opportunity.

She said she emailed Eau Claire’s Athletic Director, Scott Kilgallon and informed him that her father was interested in the job. After both Katie Gillman and her father talked about the situation, Tom Gillman went on to accept the position as head women’s tennis coach.

“Finding out I’d coach her again was a pleasant surprise, and the fact that I was going to be able to spend that much more time with her was the kicker for me,” said Tom Gillman, who was set to be content on just watching his daughter for the rest of her playing career,

Senior co-captain Mary Frassetto of the 2013 team said balancing the roles of father, daughter, player and coach has proven to be a task Tom and Katie Gillman have been able to handle.

“I think they have done a good job distinguishing the different roles that they have,” Frassetto said. “Katie is great at understanding what her dad sees.”

The ability to see eye-to-eye with her father has been a staple of their father-daughter tandem. Tom Gillman said the two see things very similarly. Katie Gillman also echoed that message.

“It is nice because he knows exactly what I am thinking,” Katie Gillman said. “We are on the same wavelength.”

As Katie Gillman’s fall season is coming to an end, so is her career as a tennis player. She said she is trying to avoid thinking about those final moments, because the year is going by so fast.

“It will be a very emotional moment for me once I’m done with tennis,” Katie Gillman said. “It has been such a great experience, and being around all my teammates is always great.”

Tom Gillman said he is going miss the time he has been able to spend with his daughter the most. Theresa Gillman said she has so much appreciation for the player that her daughter has become.

Tom, Theresa and Katie Gillman will all be in UW-Madison this weekend, as the WIAC Championship will take place at Nielsen Tennis Stadium.  Katie will compete in both doubles and singles and she said her goal is to take first in both events.