Creating her own legacy 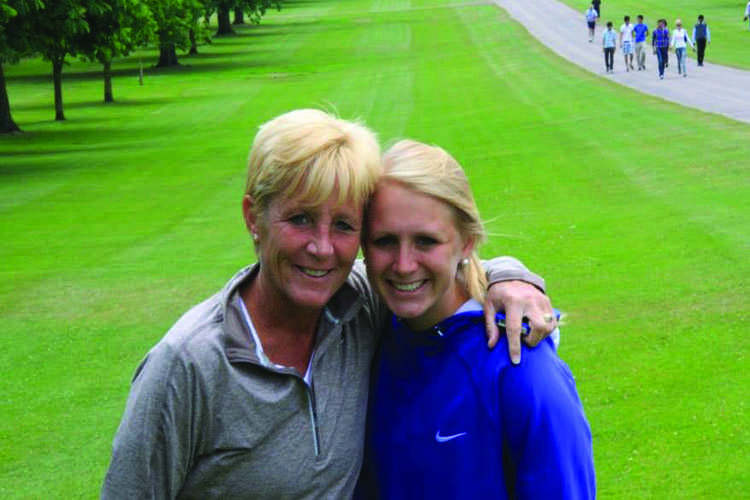 UW-Eau Claire women’s soccer captain Allie Stone knows what it takes to be a winner. She has been around success since her childhood days when, as a young second grader, she would sit courtside at Zorn Arena and watch her mother, Lisa Stone, coach the Blugolds to a Wisconsin Intercollegiate Athletic Conference championship in the 2000 season.

Lisa Stone was the head women’s basketball coach from 1988 to 2000 at Eau Claire. Her teams reached the NCAA tournament eleven times and reached the National Championship game in the 1996-97 season, which took place in New York City. She also won the WIAC crown six times.

Her 277 wins to only 59 losses gives her an unparalleled winning percentage of .824, the highest in the school’s history. She was inducted into the Blugold Hall of Fame in 2006.

After her stint at Eau Claire, she then went on to take the same position at Drake University, UW-Madison and now at St. Louis University.

“Growing up, I always wanted to be one of those players,” Allie Stone said. “That fueled me to one day play college sports, because I had been around it my entire life.”

Lisa Stone said she feels blessed her family has been with her through everything. She said Allie also felt blessed that she got to experience what she did as she traveled with her teams.

“She has been able to experience seeing one of my teams advance to the Sweet Sixteen,” Lisa Stone said. “She has been to the Virgin Islands and has visited almost every state in the
United States.”

As Allie Stone grew, up she began to thrive in athletics. She also went on to demonstrate that, like her mother, she   could lead teams to high levels of success. In her senior year of high school, Allie won a state championship playing girl’s soccer for Verona Area
High School.

“One of my greatest experiences is winning a state championship,” Allie Stone said. “It was the best way I could have possibly went out as a senior.”

Lisa Stone said the stars have to align a lot of the time for a team to win a championship. She said that is exactly what happened to Allie Stone’s team as they were playing their best soccer at the end of the season.

“When they won that game, and hoisted the trophy into the air, it brought tears to my eyes,” Lisa Stone said.

Both mother and daughter agreed it was an extraordinary moment for them to share. Lisa Stone said she was extremely proud she had the opportunity to witness her daughter win a championship.

“I was so happy for my child that she was able to have that experience,” Lisa Stone said. “As a coach, I want all my players to have that same experience, because watching it happen is truly so amazing.”

As Allie Stone’s high school career came to an end, she was faced with the strenuous question of deciding what college she would  attend and what sport she would play while at that school. Allie Stone was also a standout on the basketball court at her high school, leading her team to a state appearance.

“Choosing to play soccer instead of basketball was a really hard decision for me,” Allie Stone said. “I think I just enjoyed soccer a bit more.”

Lisa Stone said Allie Stone was drawn to the philosophy and tradition of the soccer program at Eau Claire. Allie Stone also added her mother knew the women’s soccer head coach Sean Yengo and her mother helped her get excited about the possibility of attending Eau Claire.

“Eau Claire has a special place in my heart because I grew up here,” Allie Stone said. “It felt right coming here because I was so comfortable.”

Lisa Stone said Eau Claire felt like home to her daughter and she was excited because Eau Claire is a very special place.

“Once a Blugold always a Blugold,” Lisa Stone said.

Since Allie Stone has joined the school her mother formerly coached, her teams have  never finished with a record below .500. Last season, her team finished second in the WIAC. Allie Stone is in her senior season this year for the Blugolds and she was voted to be captain by her teammates.

One of her teammates, sophomore defender Ashley Seymour, said what makes Allie Stone’s work ethic makes her a good leader.
“She is always playing her heart out in    practice, and in games,” Seymour said. “It makes the rest of us want to work harder.”

Lisa Stone echoed similar messages about her daughter’s strong leadership. She also said through all her experiences as a coach she has learned life is about   balance and you must love what you do. She said Allie Stone has lived by that.

This season, Lisa Stone said she wants to see her daughter go out with a bang.

“This is a special team that has eight seniors on it,” Lisa Stone said. “They are all good friends and they have created great memories.”

Allie Stone sees eye to eye with her mother, who she credited as her biggest fan, as she wants nothing more than to write her own name in the Blugold history books.

“I want to go out with a conference championship,” Allie Stone said. “I want to leave my mark on this program, and I believe winning a conference title will do that.”