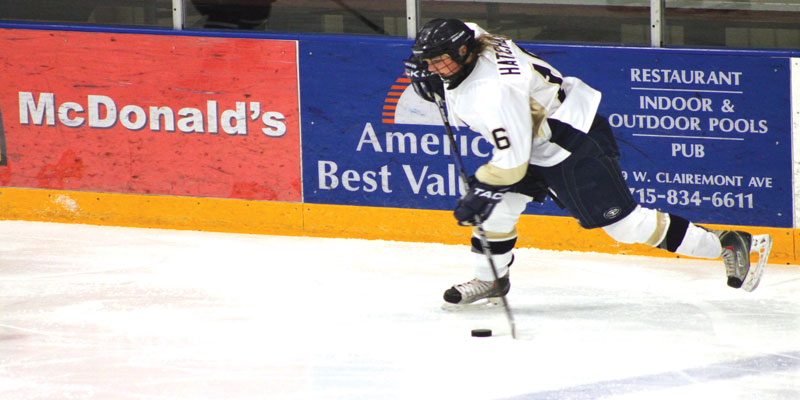 What a difference a month makes. On Nov. 10, the Women’s Hockey team had lost three in a row against UW-Superior and Adrian College (Mich.)

However, after two ties in a series against UW-River Falls and a sweep of St. Norbert on Dec. 1 and Dec. 2, the team has received six points in the standings in two series. Before a win by UW-Superior Tuesday night at St. Catherine University (Minn.), the Blugolds were tied for fourth place with Superior in the NCHA.

“That’s really huge for us, especially with them being ranked in the nation and we’re usually down towards the bottom,” said Mike Collins, Women’s Hockey head coach. “Now, we are moving our way to the top and it is a really huge accomplishment to be on the same level as them.”

After the two ties against River Falls, the Blugolds started out slow during the first game in the series against St. Norbert, giving up a goal to junior forwards Kelley Ritchie and Zoe Kurth, in the first and second periods respectively.

However, the offense came alive in the second period scoring four goals, starting with junior defender Emily Larson when she scored unassisted for her second goal of the year. For the rest of the period, offense was centered around Hadley Cookson, a freshman forward and Sam Knutson, a sophomore forward.

Cookson said that being more aggressive on offense has been a goal for her.

“I think lately, my coaches lately have been telling me to just get pucks to the net,” Cookson said. “You’re not going to get goals if you don’t shoot. I realize I need to shoot it and get it to the net and things will happen.”

In Sunday’s game, the Blugolds lost a 1-0 lead they earned in the first period off of a goal from Dani Kerr within a course of just less than two minutes. At 5:32 in the third period, St. Norbert got on the board off a goal from Kurth and then 82 seconds later they took the lead after a goal from Jade Popescul, a sophomore forward.

“We did not play well for two periods,” Collins said. “When you get good goaltending and your team continues to work, sometimes, not always, you work yourself out of a jam. Realistically, the fact we won this game is quite amazing.”

The team continued to score when they needed to in the second game vs. St. Norbert, when Kerr scored her second goal of the day and tied the game up at two setting the scene for overtime. Once again, Cookson stepped up on offense, giving the puck to Stephanie Hatcher who scored the game-winning goal.

“After it was tied and then in overtime, all that’s going through your head is that you don’t want to lose. You got this far; you don’t want to give up,” Hatcher said. The second I got the puck, I was like, “Oh, gosh, it’s my job. Hadley did her job and it’s my turn now. I guess I just shot the puck, did what I could do and luck bounced in my way.”

The Blugolds need to “play smarter,” Collins said. The team struggled with penalties throughout the game. The team served 27 minutes in the penalty box after eight penalties. St. Norbert only had six minutes in the box on three penalties. The penalties for the Blugolds included a penalty from Haluska with 24 seconds left in the third and a penalty to Amanda Kane and Mackenzie Miller within the first 90 seconds of overtime period, thus putting three Blugolds in the penalty box at the same time.

Now after the recent success, the team will look to continue their run for to the top half of the NCHA on the road with a series starting on Saturday with Marian University (Wisconsin) and then a game with St. Mary’s (Minnesota) on Jan. 4. With the exception of playing at Bethel University (Minnesota) at the start on Oct. 26 and River Falls on Nov. 16, the Blugolds have not played on the road.

“It’s great. I’d much rather be in the top half than in the bottom half. Now, we got a new test. We haven’t been on the road for a while except to River Falls,” Collins said. “Marian is an improved team and they tied Lake Forest and they have been getting some wins. We have to go down there and see how we are on the road now.”

After three conference wins, the team now has eight points in the NCHA standings, two less than River Falls and Superior for third place and four less than Adrian and Stevens Point for first.