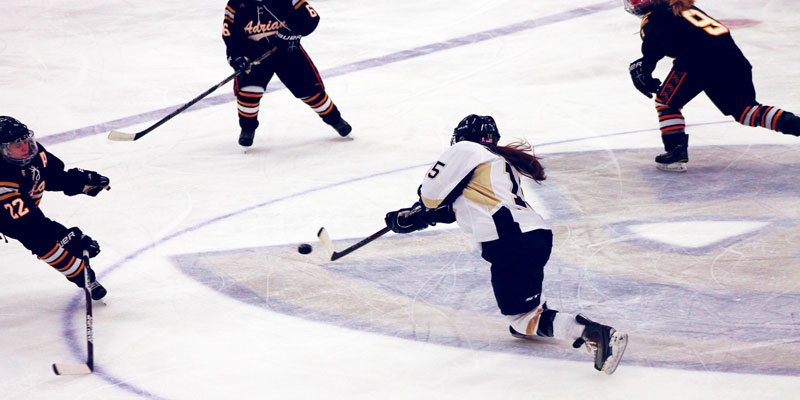 In a series against Adrian College (Mich.) that had both games decided by one goal, the Women’s Hockey team was unable to pick up any points in the standings in the Northern Collegiate Hockey Association.

In the game on Friday night, the Blugolds failed to put a puck in the net and were shutout 1-0. However, with the exception of Adrian sophomore forward Kelsey Kusch, who scored a powerplay goal in the second, there was no scoring in the game by Adrian either. Head coach Mike Collins said it came down to just making better decisions on the ice because Adrian could’ve been beaten.

However, if there was a positive for the first game, it was that goalie Paige Turner kept the team in the game, but the offense needed to pick up, Collins said.

“We competed harder for 60 minutes and our goalie Paige played a great game again and we did a lot of good things,” he said. “But we didn’t sustain a lot of pressure and we didn’t make their goalie work hard at all tonight.”

The play in-goal was a strength that carried over into Saturday’s game, but it came with a different name from the Blugolds’ roster. Senior Mara Stormer got the nod as the starting goalie in the second game and kept the team within a goal of Adrian virtually the entire game.

“I just wanted to give our team a chance to win,” Stormer said. “We really needed to get two points (in the standings) and it all came down to doing everything possible to give our team a win. If that meant standing on my head, I had to do it.”

The game was scoreless until junior forward Danielle Smith of Adrian scored 46 seconds into the second period. Eau Claire responded less than two minutes later with a goal from captain and senior forward Casey McMullen after two rebounds on the play by the Blugolds.

Adrian scored with just more than five minutes to go in the second period on a goal from junior defender Alix Vallee on a powerplay. They would remain in the lead until Kothenbeutel broke through with a goal of her own just beyond the first minute mark in the third.

The game got away from the Blugolds later in the period after a scuffle by the glass in the neutral zone between Emily Larson and Adrian’s sophomore defender Courtney Millar. The play resulted in both players receiving two-minute minors for roughing.

In the four-on-four situation, Adrian would take the lead on a goal by Hannah McGowan to make it 3-2. The Blugolds were unable to make their third comeback of the night and would lose 3-2.

“Well, it’s frustrating. I like watching intense games, but you don’t want intense to turn to cheap and chippy, but it gets like that. It’s just the nature of the sport,” Collins said. “We just have to realize that when we are not up by three or four, we have to be more disciplined and not get caught in that situation because if you do and you get penalties, it makes it that much tougher.”

However, Collins said he’d rather have his team play tough than playing without intensity.

“As a coach, you’d rather have to pull back on players than push them ahead,” Collins said. “I’d rather have them playing with a little edge than playing soft, but you have to realize the difference between playing stupid and intense.”

Up next is a home double-header against UW-River Falls. River Falls did not lose a game this season until last weekend when they played UW-Superior. River Falls is Eau Claire’s biggest rival in the NCHA.

“I think the rivalry is well understood amongst our seniors and upperclassmen,” Collins said. “It will be the best team we’ll see all year. If we’re going to compete, we’re going to have to match the intensity and play smart hockey. We can’t be intimidated and scared. We got to be confident and embrace the challenge.”

The Blugolds play in River Falls on Friday night at 7:05 and then will be back at the Hobbs Ice Center for the second game of the series on Saturday at 7:00.