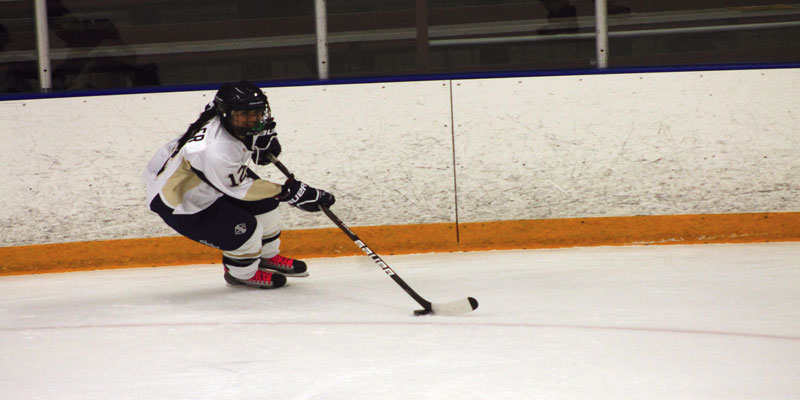 “You don’t know how big that win is.”

Those were the words of UW-Eau Claire Women’s Hockey head coach Mike Collins after the team’s upset victory over UW-Superior, the team that was ranked eighth in the nation prior to the
weekend series.

Sophomore forward Sam Knutson said that all the hard work has finally paid off.

“It felt great. We’ve been working hard all season so far and it really boosted our confidence,” Knutson said.  “We had a rough opening weekend and we all knew we had it in us and we just have to keep working. That’s what we did. That’s how it ended. We kept pushing it to the very end and we came out with the big win.”

The score was tied at four in the final two minutes of the third period when Knutson gained possession of the puck in front of the net and scored.

Working on connecting on plays in front of the net was something that the team worked on in the week prior, Collins said.

Knutson attributes the win to that and a complete team effort in the game.

“It felt great and it was really good to get that goal, but I wouldn’t have done it without my team,” Knutson said. “I was the one who shot it, but without our team pushing it and playing hard, it would have never happened.”

The momentum was building through the second as the Blugolds scored late in the period to bring the game to a one goal deficit.

Collins said that during the second intermission he tried to make sure the team knew the game wasn’t over yet.

“It’s all about momentum. You can’t quit. One more shot makes it even and one more after that gets us ahead. We just try to simplify the game,” Collins said. “I’m not smart enough to complicate it, so we just have to go with the simple approach and what I know best is continue to work and enjoy doing it. Winning is a lot more fun than the alternative.”

Collins said he is going to continue to look at the season in a positive manner, especially after the upset against Superior.

“We’ve got 20 girls who are happy and every time they get a win like that, they start to believe a little bit more and good things can happen,” Collins said.

In the second game of the weekend series, however, Superior ended up winning 6-1. The Blugolds’ lone goal came from senior forward Casey McMullen in the third period.

The loss on Friday was enough for Superior to fall out of the eighth spot
nationally as they were announced as the ninth- ranked team this week.