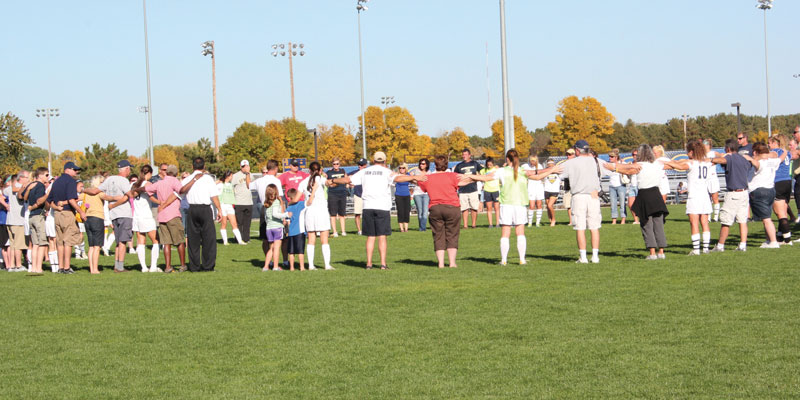 Eau Claire set the pace early as junior forward Paige LeGate knocked one in from in front of the goal to put the Blugolds up 1-0 in the 11th minute. This was followed up by a successful penalty kick from Oshkosh’s
Nicole Palmquist.

“We just talked about how we just needed to play our game and let the referees not get in our head because there were some questionable calls and we let the emotions get to us for a little bit there,” said senior forward Gina Williams. “We thought we had it. We weren’t content, that’s for sure.”

The second half is when the two big story lines of the day came out for the Blugolds. First, the team had a flurry of offense between the 11th minute and the 21st minute of the half as they scored three goals.

Head coach Sean Yengo was extremely pleased with the outcome of
the game.

“It feels great. The girls are very deserving, Yengo said. “I thought the result was an indication of how hard we played and we’re coming together as a team right at the right time.”

Not only did the team score three goals in one half, but they achieved something no team has done in women’s college soccer so far this season against UW-Oshkosh. The Titans didn’t give up more than one goal in an entire game this season, let alone
one half.

“It’s nice to see the offense really coming to life. You know, it’s just they’re playing together. They’re
keeping it simple and not over-complicating the game,” Yengo said.

The first two goals in the second half were scored by Williams, one off a penalty kick.

“It seems to be a theme with us this year — just keep them going. Once we get one in, we seem to be able to get a couple in just a couple of minutes,”
Williams said.

Williams said it felt good to have her parents in attendance for a game in which she performed well
on offense.

“It feels good that all of our parents are here and I know my parents haven’t seen me score that much so it was good to show them a good
game,” she said.

With the win, the Blugolds entered a three-way tie with Oshkosh and River Falls for second in the conference.

“I was really pleased with how we played for long stretches of that game,” Yengo said. “It was a hard-fought game and that’s pretty typical of our
conference.”