Ames in as interim wrestling coach 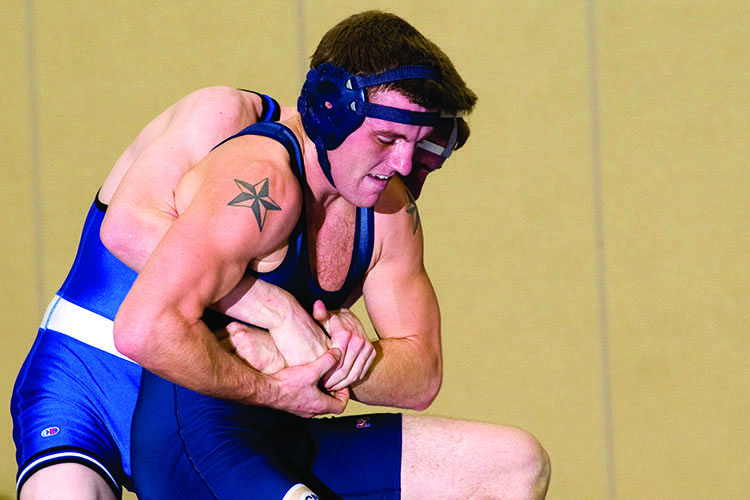 Russ Peloquin, who had been the head coach for the wrestling team the past two seasons, is on sabbatical for the 2012-13 season. In the position to take over on an interim basis is assistant coach Jon Ames, who was a captain for the team in 2009-10.

Scott Kilgallon, director of athletics at the university, announced the decision on Oct. 2.

“I think the biggest thing is he has a lot of pride in the program,” Kilgallon said. “I’ve gotten to see him as both a student athlete and assistant coach. He’s very responsible. He has respect of his athletes.”

Kilgallon says that Ames has more than just a respect for his athletes, but he has a passion for the entire sport
as well.

Ames, a native of Viroqua, Wis., started wrestling in third grade he said. In his first year as a wrestler, he qualified for the Wisconsin state tournament.

“I just saw all the things you could do with it with the traveling and just the competition itself is something I fell in love with,”
Ames said.

Ames came to UW-Eau Claire as a transfer student from UW-Platteville in 2007 after his freshman year. Two years later he was a
captain on the team. He earned a Scholar Athlete award in his tenure on
the team. One year after that, he
became an assistant coach for the
first time.

Even though he is just more than two years removed from an active role on the student athlete side of the team, none of the current members on the team were teammates of his.

“That’s one aspect that is helping me out here. I view them as I am their coach, not as their colleague or a
teammate,” Ames said.

While Ames was in his first year as an assistant coach in 2010, Matt Rieckoff was a freshman and new to the team. Now in 2012, he finds himself as a captain on the team
under Ames.

“It’s different having a coach so close to our age, but he brings a lot of intensity to the room,” Rieckoff said. “He definitely knows the sport.”

As Ames is just recently out of college, there is only just a few years difference in age between Ames and the athletes on the team.

“It’s a little different because he’s still young, but that can be an
advantage because he knows where we are coming from and what we need,”
Rieckoff said.

In the two years as assistant coach, he learned under Peloquin, who was in his first two years as head coach at
Eau Claire.

“The first year was kind of stepping into it, getting used to it and as that year progressed, getting more and more responsibilities (and) learning more coaching techniques,” Ames said. “Then last year, I was the only returning assistant so I was handed a lot more responsibilities. So it was a great opportunity to learn from Russ the kind of personality and mentality that a head coach has to have.”

The experience has proven valuable, Ames said. He also said that if he were to have been a head coach right after his time as a student athlete without the assistant coach experience, he would not be able to manage it as well.

“If I were a head coach fresh out of college, I’d be able to run the practice, but running practices is only a fraction of what a head coach actually does,” he said. “Just the logistics and the behind the scenes stuff would have caught me by surprise if I did not get a taste of it the last two years as an
assistant coach.”

As Ames has started head coaching for the first time, he said he believes he would like to be a head coach in the future as well.

“Now that I’m a head coach, I’ve really enjoyed the responsibility and just the things that go along with being a coach. So, I can definitely see myself whether it be at college, high school or youth, I can see myself being a (head) coach down the line.”

Peloquin is on leave from coaching due to what the college is referring to as “personal reasons” including workload since he has additional responsibilities as an instructor in the
Kinesiology program.

Ames has a degree in Biology from Eau Claire. He does not know if he will continue on the staff following the 2012-13 season, but if he isn’t, he said he will look to other coaching opportunities as well as jobs that would satisfy
his major.