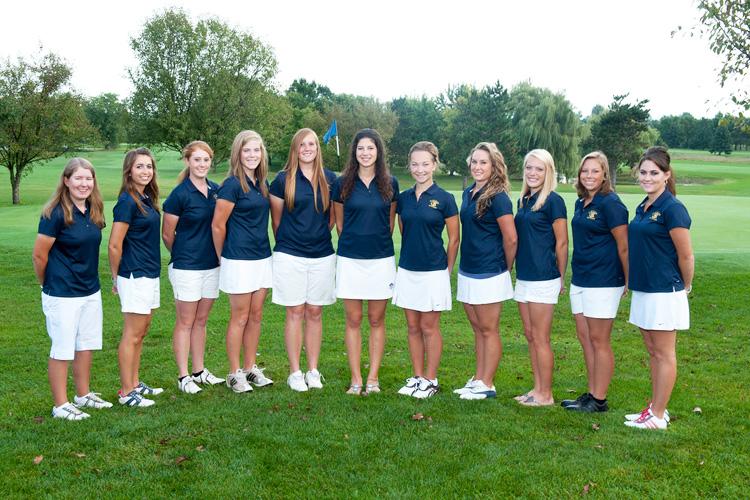 Despite gusty winds and a sub-par short game, the women’s golf team placed third at the Illinois Wesleyan Spring Fling Saturday and Sunday in Normal, Ill.

Senior Sara Mattes emphasized the team’s need to sharpen their short game heading into their next tournament.

“It’s mostly mental when you’re on the green,” Mattes said. “We lost some valuable strokes down the stretch because our short games are not as good as they
could be.”

Mattes led the Blugolds and tied for sixth place overall in the tournament, shooting a combined two-day score of 160 strokes. Junior Catherine Wagner was the next strongest performer and tied for 13th place, while senior Emily Swift tied for 16th.

Swift said the conditions in Normal were not ideal for golfing and that the weather definitely played a role throughout the tournament.

“The wind was pretty brutal,” Swift said. “When you’re hitting a ball that small and there is a crosswind, the shots you shoot don’t always go where you want.”

For the team, this tournament was the first of the spring season. Coach Meghan Sobotta said there were a few things she’d like to see fixed, but that she was pleased overall with their performance.

“The girls played pretty good for their first tournament since last fall,” Sobotta said. “There was some good and some bad that I saw, and there is always room for improvement.”

The only two teams that finished ahead of Eau Claire were DePauw University (Ind.) and Centre College (Ky.). In the most recent national rankings, DePauw was ranked third while Centre was ranked fourth. Tournament-host Illinois Wesleyan was also nationally ranked, coming in at No. 10.

Even though the team faced some strong competition, Wagner said she wasn’t satisfied with the third place finish.

“We played well, but I know we can play better,” Wagner said. “We need to smooth out the rough edges and keep improving as a team. If that happens, this team can go far.”

The next tournament the women will compete in is the Wartburg Spring Invitational at Centennial Oaks Golf Course in Waverly, Iowa, April 21 and 22.