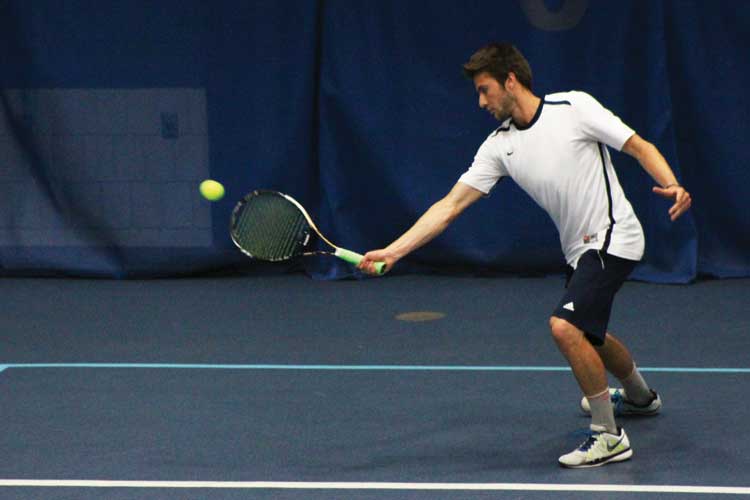 The men’s tennis team rebounded with two wins by a combined 17-1 score after entering the weekend having lost four out of their last five matches.

On Friday, the men took down St. Scholastica (Minn.) 8-1, and then followed up with a 9-0 sweep of Edgewood College on Sunday. The team won all their singles matches in both matches, with the lone loss coming in No. 2 doubles position on Friday.

Coach Tom Gillman said he felt the youthful team’s struggles going into the matches were largely due to them playing with too much emotion. He said his young roster is filled with talented players who just need to make sure they don’t doubt their ability during adversity.

“They lose a couple and they don’t have anything to fall back from,” Gillman said. “That was the biggest focus for us this weekend and we were a lot better.”

Junior Florent Marco put together a pair of strong performances during the weekend in his No. 3 singles position. On Friday he took down his opponent 6-2, 6-1, then followed it up by sweeping 6-0, 6-0 on Sunday.

Marco said the emphasis on keeping his emotions in-check really helped his play.

“The whole season I’ve been trying to fight (getting too emotional),” he said. “It’s a big problem because when you get mad, everything gets worse. So I really think I improved as a player.”

Freshman Michael Roden competed in the No. 6 singles position and was also able to pick up two wins during the weekend, including a 6-0, 6-0 sweep on Sunday.

Gillman said overall he was pleased with the play from all of his younger players but was especially pleased with freshman Joey Minear. Minear played No. 5 singles against St. Scholastica and won 6-1, 7-6 (8-6). Then he moved up to the No. 4 spot against Edgewood and earned a 6-2, 6-1 victory.

“He’s always been a talented player and brings a lot to the table, but he is young,” Gillman said. “I think he got back to doing some things he does really well.”

With the pair of wins, the Blugolds improved to 16-7 overall on the season.  This weekend the team will play their final three matches of the regular season against UW-La Crosse, UW-Oshkosh and UW-Whitewater.

“I do believe if we win two out of three matches from this weekend, our chances are pretty good that we can make it to nationals again,” Gillman said. “We want to put our best foot forward if we can.”

Marco said if the team doesn’t put too much pressure on themselves going into the matches, he doesn’t see any reason why winning two of three wouldn’t be possible.

“As a team we play badly when we put pressure on ourselves to play perfect,” Marco said. “If we can go in there with the mentality that we have nothing to lose, I think we’ll play a lot better.”