When Woody Met Wesley: The cultural moment that was “White Men Can't Jump” 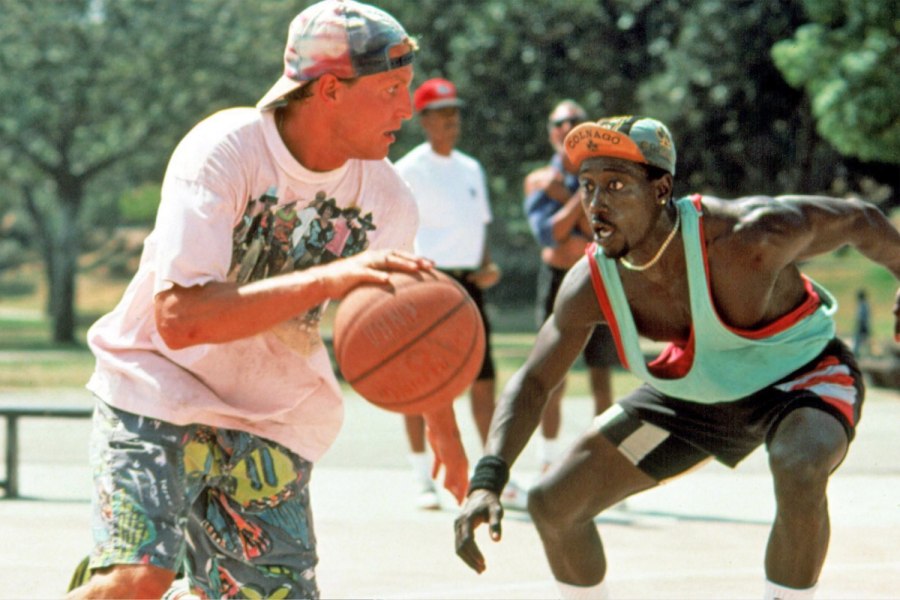 The year is 1992. The shorts are shorter than ever and the Walkman is the pinnacle of music listening technology. The newest sports movie out, destined to become a cult classic, has the eyebrow-raising title, “White Men Can’t Jump”.

From its soundtrack to its characters, this movie upholds the feeling of the 1990s in every way. Its setting brings authentic emotion to a campy, over the top film. But before I get ahead of myself, a brief synopsis is required for the uninitiated.

Hustling, in the context of 1990s pickup basketball, usually consists of betting money on a game you’re about to play and doing everything to stack the odds in your favor.

This always seems to include a good amount of trash talk to get into the opponent’s head, but some players, including Dean, were willing to go as far as throwing a game or two if it meant a payday.

On the outdoor courts of L.A., the games are often played for money, and the two main characters take full advantage, each for their own good reasons.

Deane has a wife and young child who he supports with several jobs. Hustling on the court is just another way for him to put food on the table and hopefully move his family out of the dangerous side of town.

Hoyle and his girlfriend Gloria Clemente, played by Rosie Perez, owe two criminals some money. Hoyle sees hustling as a way to pay his debt.

At first, Hoyle and Deane take turns hustling money off each other, but they soon realize they’d be better off working together. Thus a partnership is born.

Several things make this movie great, but the juxtaposition of its two main characters is probably the most notable from a narrative standpoint. Hoyle and Deane are polar opposites in every way apart from their love of basketball.

On the court, Hoyle was a simple but skilled, fundamental player. Nothing flashy was done unless necessary. This preference of utility over aesthetics carried over into Hoyle’s wardrobe as well.

His baggy often faded shorts and t-shirts were not in fashion by any means, but they were comfortable. His quirky attire also helped Hoyle further convince the potential victims of his hustles that he really was just a goofy white guy who didn’t know a thing about hoops.

He implies this intention when he first hustles Deane in the beginning of the movie.

“…you see the backwards hat, the gray socks, the funky outfit, and you say ‘now this guys a chump’…so I must be doin’ it for a reason,” Hoyle said.

Deane couldn’t be more different. His rolodex of moves was packed full of no look passes and reverse layups. Don’t get it twisted, Deane loved to win but he also wanted to look good doing it.

Throughout the movie Deane sports colorful tank tops that leave most of his chest exposed, shorts that show off his stylish cycling compressions which pair well with his trademark cycling cap worn throughout the movie. All finished off with a gold chain around his neck.

One might ask why a basketball player would want an expensive chain flying in front of their face while they’re playing, or why Deane, who doesn’t touch a bike the whole movie, is half-dressed in garb better suited for the Tour de France than a pick up basketball game.

The answer is because it looks so dang good. The courts were full of bright and loud personalities and of all flashy players there, Deane was the flashiest. The argument of style versus substance is a long contested one, but to Deane, they were one in the same.

The personalities of the main characters clashed just as much as their wardrobes did and this only adds to the beauty of the movie. As their relationship grows from rivals to partners, then eventually to friends, the audience sees Deane and Hoyle learn from each other.

Deane learns not to judge a book by its cover, as he starts to trust his goofy white partner on the court. And by the end of the movie, the chip Hoyle has on his shoulder about having to prove himself as a player appears a bit smaller, as Deanes confidence seems to rub off on him.

Beyond the style and behavior of its characters, the movie leans on the sun drenched city of L.A. as a backdrop and has a soundtrack that jumps all over the place, from Jimi Hendricks and Public Enemy to Ray Charles.

From a cultural perspective the movie caught lightning in a bottle with its star-studded cast. A young Snipes, who would eventually become arguably the most popular Black action star of the 1990s, had just started to earn his stripes at the time.

The film also managed to catch Harrelson before he became the talented, womanizing Hollywood star he is now known as, and paired him with Perez, another future icon, in one of her first big roles.

The creators probably didn’t realize it at the time, but in making this movie they were creating a perfect snapshot of the current moment in time for future generations to look back on, and it clearly struck a chord.

The movie is still quoted to this day, and on Halloween one is likely to see several imitations of the movie’s eclectic duo. But at its heart, the movie is quite simple. It’s about two men and the beautiful game of basketball.