Doing business while doing your business

The marketing phenomena of advertising in public bathrooms 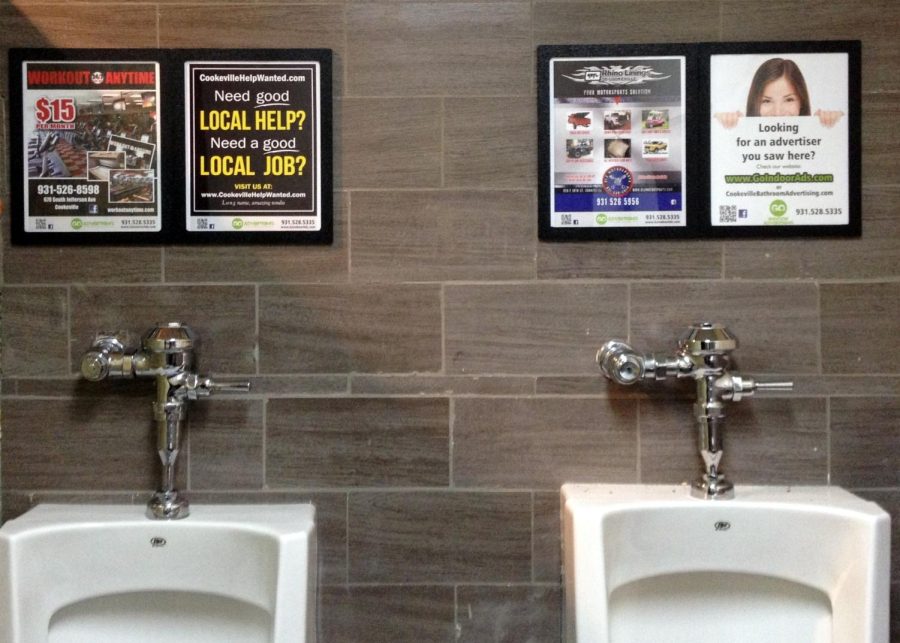 We cannot escape advertisement even in the restroom

Advertisements fill every public space imaginable. From billboards to TV screens to constant pop-ups on our phones and computers, advertising is inescapable in daily life.

It is estimated the average person viewed around 10,000 advertisements every day in 2021 across both digital and physical platforms. But one unexpected form of advertisement continues to flush out the others — restroom advertising.

Restrooms create an audience that is held captive to the ad in front of them. Whether inside the stall door, above the urinal or above the sink, for a few minutes there is nothing a person can do but look at the ad displayed at eye-level in front of them.

While most advertising ends up being money down the drain for a company, advertising in restrooms proves to be effective. A study from the American Restaurants Association found 78% of restroom visitors could recall one or more of the ads and 75% reported restroom advertising as a “good idea.”

It is rare for Americans to view ads as anything but an inconvenience so the rare positive reactions are quickly capitalized.

Businesses advertise everything in restrooms including products, sales and events. If someone is using the restroom they are likely already a customer of that business so restrooms are a chance to advertise new products to loyal customers.

Restrooms also give businesses a chance to target specific demographics. Businesses can easily target gender, age and economic status demographics by placing their ads in the restrooms of different establishments.

For example, a product or event targeted toward men in their 20s would be very successful advertised in a men’s restroom in a bar or coffee shop with a young customer base.

Restroom advertising is used for more than brand promotion and is often used in ways that can benefit the audience. Many ads in gas station restrooms give information about human trafficking and what to do if you are a victim.

Similarly, bars will post information about sexual assault and harassment and advertise what to do if you are being sexually harassed or feel threatened. Some will include code words to signal to the workers you may be in danger.

The idea behind advertising to victims makes a lot of sense as a public restroom may be the only place they can get away from their abuser. Using that space to help them and promote public safety is incredibly important.

Advertising for what to do in a crisis should be one of the few forms of advertisement allowed in the privacy of restrooms.

Advertisements have invaded every aspect of our daily lives. They fill the streets we walk down, the roads we drive on, and every time we turn on our phones. Radio ads invade our cars and TV commercials invade our homes.

Why do we need advertisements to invade our bathroom stalls?

Restrooms need to be a place to escape the constant consumerism that has invaded our lives. We need relief from a culture where our time using a restroom is monetized and targeted for profit.

We need a brief break from being continuously sold to, even if it’s just to use the bathroom.