Truth behind calling a woman “crazy”.

A breakdown of the “hysterical woman” trope. 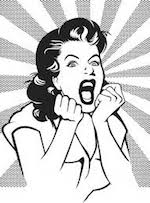 The hysterical woman trope has been used in the media for centuries and it’s time to change the narrative.

“Women be crazy”, the harrowing tale of women within society summed up in an incredibly offensive slew of words. The implication is that no matter the circumstance, women, or bitches, in this case, will always blow things out of proportion.

This famously sexist saying is intertwined within popular culture. The outdated ideology behind the hysteric women is tainting our social progress and dismantling women.

Within our multitude of institutions, this phrase is as active as it is in popular culture. The crudeness of the quote is watered down, but the implementation is still the same.

In the political field, a woman is critiqued on her personality, not her ability to run an office. At the doctor’s office, she is gaslit and her pain is silenced. And when she handles herself as a man would, she is cold hearted.

In each situation, a woman is devalued and deemed as something she is not. These preconceived ideas of what a woman is versus who they are is an important narrative to shift.

Our voices are constantly being talked over or ignored. The things we say have meaning and value and cannot be written off as the delusions of a crazy woman. Throwing the things we say out the window just off of the conjecture of women being hysterical or hot-headed.

The hysterical woman trope has been overplayed throughout the media. Taylor Swift for example has been dragged through the mud over her artistic choice to write about her relationships. A concept not new to the music industry, and yet when a successful woman is writing about men it’s unacceptable.

Thus leading to her being deemed a “psycho ex”. Swift was demonized for doing exactly what her predecessors did, writing about personal experiences and making a tune out of it.

The stereotype of the “crazy woman” has been overused and is an outdated representation of the inner workings of women. This stigma devalues our emotions and brings us into a place of submission.

The implication that women are inherently crazy and have no motives behind their actions or feelings is ridiculous. Dubbing a woman as “hysteric” or “crazy” minimizes their experiences and sentiment.

This depiction has affected the image of feminism. The true doctrine of feminism is eliminating the harmful heteronormative ideology while also pushing for gender equality in our institutions and society.

The influence this stereotype has proclaimed is larger than meets the eye. Undoing generations of misogynistic language and ideals is larger than just the media. But our laws, practices, values, beliefs and institutions are ingrained with this ideology.

The association of women and the word crazy is more than just a comparison. It’s the depiction of women as overly emotional or irrational that takes on its form. Essentially, women who have opinions and share these opinions are crazy.

Narrowing depictions of women to only psychological destroys the opportunity for women to be outspoken or step outside the line. This trope burdens women and lingers over every decision made. We must be the generation to dismantle the hysterical women trope and the toxicity surrounding it.