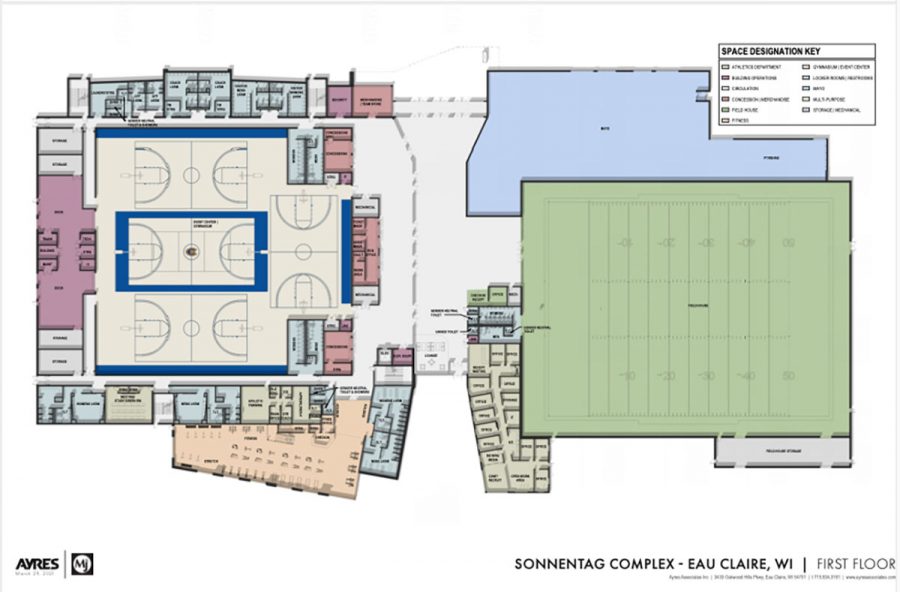 The Editorial Board feels there was not enough time for students to knowledgeably complete the referendum survey.

Story by Editorial Board

On Wednesday, April 14, it was announced a student majority voted to support the funding operations of the new Sonnentag Complex Event and Wellness Center after its construction.

However, many students are concerned with the results of the referendum — specifically how there was a lack of notice and background detail from UW-Eau Claire administrators.

The voting for the complex’s student funding took place alongside the 2021 spring Student Senate elections, which were held April 12 to 14.

Prior to the email release, Senate began an open forum procedure to introduce bill 64-B-13 on March 23. The bill proposed a referendum vote offered to the students to vote on the construction of the Sonnentag Complex and Event Center, The Spectator wrote.

The bill was introduced by Kimera Way, the president of the UW-Eau Claire Foundation.

The following week, the bill passed with a vote of 26-0-2. The referendum questions were then included in the spring Senate election, The Spectator wrote.

The Spectator editorial staff believes the student body did not have enough time — in the three-day window of the election — to make a well-rounded decision on whether they were in favor of student dollars being put toward the complex.

The amount of students who participated in the election is drastically smaller than the amount currently enrolled at UW-Eau Claire — there are currently 10,503 undergraduate and graduate students, according to the UW-Eau Claire Factbook.

“Once again, we are calling on the university’s lack of transparency of when information is being released to students,” a Spectator staff member said. “This is not the first time where the campus staff, faculty and students have been made aware of an administrative decision with little to no notice.”

The referendum detailed a fee of no more than $90 a semester for the services and benefits “students will have access to as users of the building once it opens,” Jake Wrasse, the legislative and community relations liaison, said in an email to The Spectator.

It was made aware via email by Chancellor James C. Schmidt that students will not begin paying the fee until the complex construction is completed.

The Chippewa Valley YMCA was originally meant to be a partner in the project until the organization made the decision in 2019 to no longer contribute to funding, The Spectator wrote in 2020.

The W.R. Davies Student Center, completed in 2012, had a similar approach in acquiring its funding.

Originally, in March 2000, the Student Senate placed a referendum question on the student body election ballet, asking students if they “agree to support an increase in segregated fees up to $38 per student, per semester.”

The fee was going to support the Davies Center’s expansion and renovation, and it was approved by a “wide margin,” The Spectator reported.

Students started paying the fee in the fall of 2002, Wrasse said; however, by 2006, the Davies Exploratory Committee had recommended a full replacement of Davies, instead of just renovating the building.

The UW System Board of Regents then approved the committee’s request, and the final cost of Davies increased to $48.8 million.

This decision caused the segregated fee that students were paying to increase, and it reached its current level of $326 per student per semester in the 2010-11 academic year, Wrasse said.

The increased fee covers the cost of designing and constructing the most-recent Davies Center, and an additional administrative fee for on-campus meal plans that “supports part of the ongoing operation of the facility,” Wrasse said.

Compared to the segregated fee students pay for Davies, Wrasse said students don’t have to pay for the design and construction for Zorn Arena’s replacement — the Sonnentag Complex.

Ultimately though, students who voted to pass a referendum to renovate Davies didn’t have to pay the fees added to student tuition later — after the building was constructed — as many did not attend UW-Eau Claire by the time the center was constructed.

The Spectator editorial staff feels this structure of voting does not benefit the future student body of the university. Students who will not see the completion of the Sonnentag Complex were the ones voting on whether future students should pay for it.

Another topic of discussion amongst students has been the efforts to implement sustainability initiatives to the complex’s final construction phase, which has yet to be released.

Construction for the center was originally set to begin in 2020, but was postponed due to the COVID-19 pandemic, Way said.

A certification for sustainability, also known as a Leadership in Energy and Environmental Design Certification, recognizes the amount of green building strategies a construction or renovation of a building contains.

According to the Recycle Track Systems, in order to become LEED certified, a buildings design and infrastructure must:

On April 12, the UW-Eau Claire Student Senate proposed and passed bill number 64-B-16 toward a student initiative for third-party green building certification of the Sonnentag Complex.

This bill only accounts for the certification process of the Sonnentag Complex — not the construction prior to recognizing the complex as sustainable, according to bill 64-B-16.

A LEED certification — in addition to the funds required to construct sustainable projects onto the complex — would require administrative leadership to encourage the UW-Eau Claire Foundation to assure large donor dollars toward the project.

Staff members who understand the third-party certification process would be able to best advocate for the LEED certification and construction requirements, The Spectator staff said.

A staff member — such as a campus sustainability coordinator — would have the required expertise to advocate for third party certification for the complex, Lauren Becker, student office of sustainability director, said.

“Any sort of third party certification in the design process has to be asserted,” Becker said. “The sooner in the design that it’s asserted, the less expensive it’s going to be.”

Brian Drollinger, director for risk management and safety, has been appointed as a sustainability coordinator to officially begin in the fall of 2021, according to Grace Crickette, vice chancellor of finance and administration.

Because there has not been an explicit administrative staff member advocating for sustainability within the complex — until 2021 — it is reasonable for students to question who is defending the initiatives they want for Sonnentag, especially if student dollars are attached, The Spectator staff said.

“When we talk about the total cost of LEED for Sonnentag, we are not not talking solely about the certification process,” a Spectator staff member said. “If your building hasn’t been designed to third-party certification standards, an added cost of making a sustainable building emerges.”

The sooner third-party certification is advocated for by those sitting at the design table, the cost of certifying and building a complex that can be certified will become less expensive over time.

Advocacy and interest for the third-party green recognition of the Sonnentag Complex should not be solely put on the shoulders of student government or student employees on campus, The Spectator staff said.

A previous version of this editorial was published April 22. Some of the editorial’s content has been adjusted to reflect additional knowledge gained in conversations with UW-Eau Claire personnel.

In that first edition, it was indicated that the election took place over two days but it was in fact three. The enrollment number was also updated to match the UW-Eau Claire Factbook.

The Spectator staff can be reached at [email protected].