The immorality of a multinational company and its now former CEO 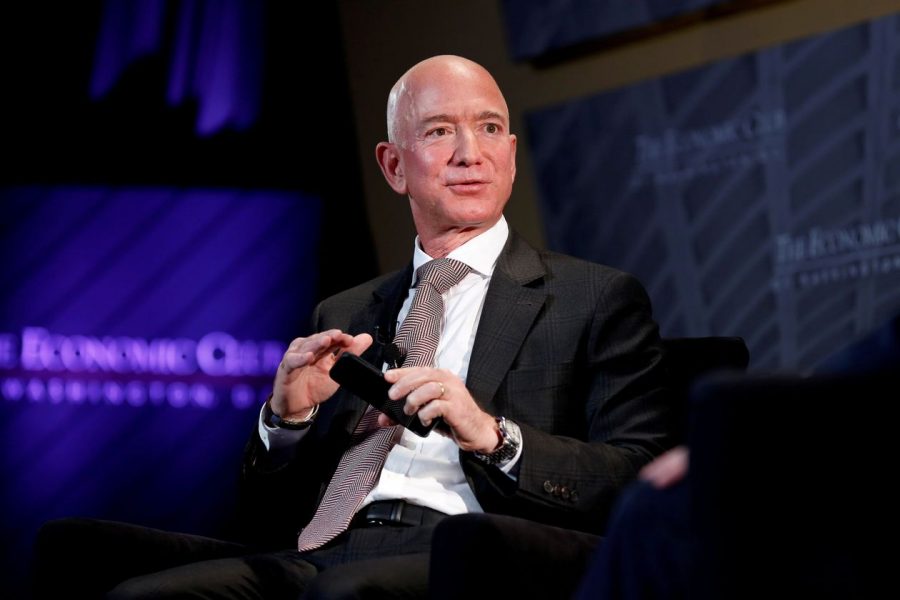 Bezos is not only the head of Amazon, but also owns several ventures like the Washington Post and others under Bezos Expeditions.

One of the biggest headlines from the past week or so in national news involves Jeff Bezos, who has decided to step down from the head of Amazon and into the position of executive chair.

For those unfamiliar with the name, Bezos is the founder of Amazon and has been its CEO for the past 27 years.

Bezos announced his decision to step down from the position on Tuesday, Feb. 2.

The issue with this decision is that Bezos, along with his company, has a lot of immoral past decisions that make this current decision suspicious.

Amazon is a highly successful multinational company. According to CNN, Amazon’s stock has grown nearly 69% in the past year alone.

CNN also credits the current COVID-19 pandemic as a reason why Amazon has only risen in stock and monetary value, as e-commerce has grown to be essential.

Beyond Amazon, Bezos owns several other business ventures, including the Washington Post, Blue Origin and the Day 1 Fund, among others of Bezos Expeditions.

Ventures like the Day 1 Fund, while altruistic in nature, do not excuse the rest of Amazon and Bezos’ actions.

Websites like Do It Without Dues are a perfect example of the kind of work Amazon does to violate workers rights.

In particular, this website reports workers unions so that they can’t get a foothold in the workplace. There are pages that intend to bias workers against worker unions.

Amazon has a reputation for being particularly cruel towards its own workers, it can even end up being deadly, like with a particular incident from October of 2019.

A warehouse worker reportedly died of a heart attack in the warehouse and remained on the ground for 20 minutes before anyone came to help him.

According to the Guardian, only a few days earlier that same worker had misplaced an item and was corrected for the mistake within a few minutes of making it.

This is just one example of several incidents Amazon has had a hand in. The National Council for Occupational Safety ended up putting Amazon on their “Dirty Dozen” list of employers that violate their workers’ lives and are repeatedly unsafe in 2018 and 2019.

Amazon also received a “dishonorable mention” in the 2020 edition, which focused especially on employers that were unsafe regarding COVID-19. At the time of the publishing of the 2020 edition, Amazon had been guilty of 74 different warehouses leading to COVID-19 outbreaks.

Amazon also caught national attention for a recent discovery that it has stolen tips from delivery drivers for years, resulting in a $62 million fine to settle the case, despite reassuring both shoppers and drivers that it would pass the tips on to the drivers.

By becoming executive director of the Amazon board, Bezos is not quitting from the company. Instead, he will essentially be able to do a lot more with less media scrutiny.

In other words, Bezos is promoting himself and pulling Andy Jasky, the former chief executive, into the spotlight to take his place.

Since Bezos and Amazon have gone on unchecked for so long, it is necessary to penalize the violations of workers’ rights and to devalue Amazon as a whole for its transgressions.

A way to go about this would be to actually enforce antitrust laws. This would allow other businesses to get a foothold without being crushed by companies like Amazon right from the start and allow competition.

Additionally, some form of penalty must be put forth to prevent the villainization and firing of unions and workers who try to establish them.

The United States established during the industrial revolution that worker unions are a necessity for the common person to be treated with dignity and respect for their rights.

Those are being violated now, a couple hundred of years after this was initially realized. How much longer should the workers of Amazon have to deal with these heavy violations of their rights and having their pay stolen and labeled as “excess profits?”