National politics, the scientific community and a fly

The vice-presidential debate both answered and ignored important questions 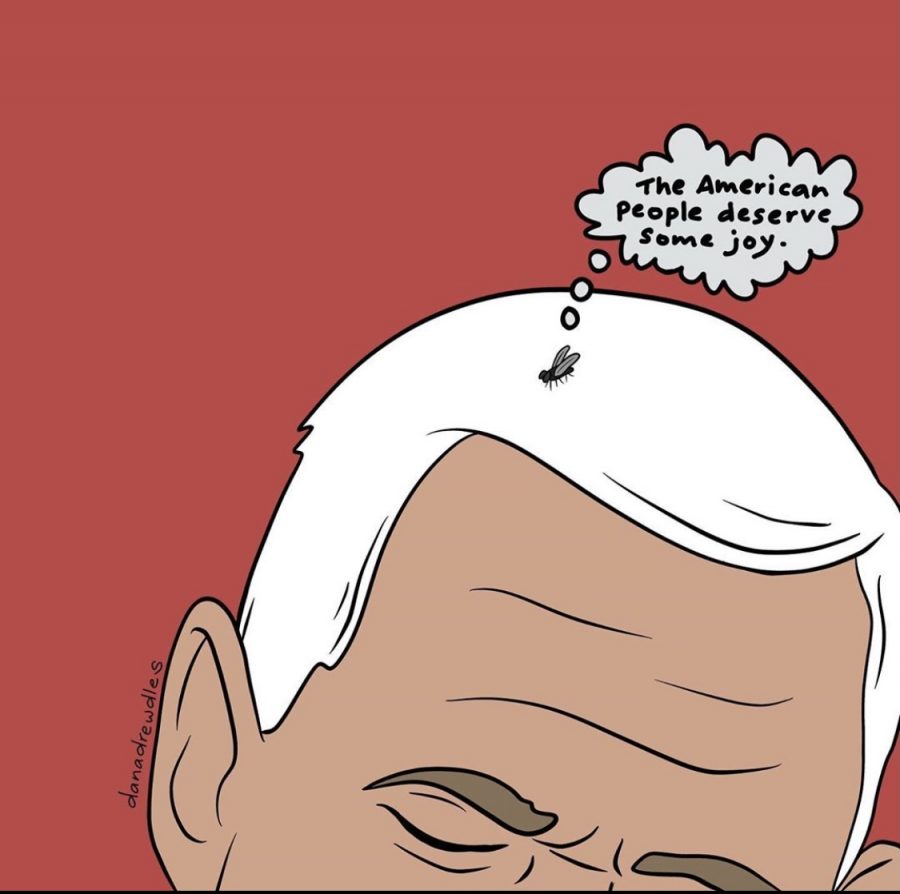 During the vice-presidential debate, the American people found a reason to laugh thanks to this little fly. Illustration by Dana Drew, she can be found @danadrewdles on Instagram.

The vice-presidential debate that took place at 9 p.m. on Oct. 7 in Salt Lake City between Senator Kamala Harris and Vice President Mike Pence felt professional compared to the last debate — which was not a difficult feat.

Nonetheless, the candidates did not disappoint the American people — both incredibly willing to deflect every question that Moderator Susan Page, Washington bureau chief for USA Today, asked.

For example, Pence failed to provide an answer when asked whether he would ban all abortions in Indiana if Roe v. Wade was overturned by the Supreme Court.

Pence also made a point of changing the subject when asked why the death toll in the U.S. from the coronavirus is higher than almost every other wealthy country.

Pence is not the only champion of deflection. Harris made a point of ignoring direct questions as well. When asked by Pence if Democrats would put justices into the Supreme Court if Judge Amy Coney Barret is established, she dodged the question.

Now onto what I would call the most important topic of the debate: Climate change. This was probably the most distressing part of the debate.

When Page said, “Do you believe that climate change poses an existential threat?”

Pence responded with an unsatisfying, “The climate is changing. We’ll follow the science.”

Pence did not address his administration’s constant contradiction of the scientific community, or the deconstruction of over 100 environmental regulations.

Rather Pence chose to attack Harris and Biden, accusing them of plans for a no fracking ban which Harris denied before then promoting Biden’s $2 trillion plan for renewable energy that would create over 7 million jobs.

For climate activists like myself, this was disappointing. Harris sacrificed an opportunity to promote clean energy in the economy for the chance to win the vote of a more conservative audience.

But perhaps I am being too harsh. This debate was still able to accomplish something beautiful, a complete social media storm about the fly that landed on Pence’s head during the debate.

This little fly was able to inspire thousands of parody twitter accounts, sold-out campaign merchandise and a “Saturday Night Live” skit which brought joy to both children and adults in the U.S.

Now, I know this took a bit of a left turn compared to the topic at hand, the debate and whether it’s better to put our country into the hands of one old white guy or another old whitish-orange guy.

Here’s the deal. As the vice presidential debate and the presidential debate before that have shown, everything is pretty much anarchy. From Biden and Trump having a cat fight on stage to Harris and Pence ignoring every important question and promoting their candidates with questionable “facts.”

I don’t know about you, but this is a world that I do not recognize. A world where the values that I have been taught since I was a kid mean nothing anymore.

My point is, the world has never been more politically divided and it is hard to find things to laugh about in all this madness. So I like to think of the little fly that landed on Pence’s head as a symbol, that even in the darkest times there is room to laugh.

This fly could have landed on anyone’s head, but he decided that this was his time to shine and he took it. Parking himself on the vice president’s head in the middle of a debate that could determine the outcome of an entire nation.

If you don’t find that hilarious, I don’t know what to tell you.