Enthusiasm for Trump holds despite pandemic

Although some call into question the ethics of holding rallies during a pandemic, many still gather. 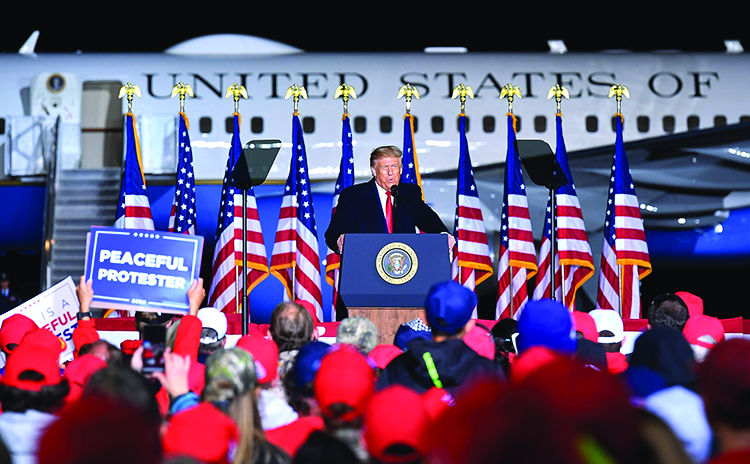 President Trump held a rally in Mosinee, Wisconsin on September 17 to a large gathering of supporters.

Last Thursday I arrived at the Central Wisconsin Airport in Mosinee, Wisconsin. I was there to see President Donald Trump speak at a rally as he continues his campaign for presidency.

I wanted to see for myself what a rally — especially one during the current pandemic — was like. What would actually happen? Who were the people attending? And what would Trump say?

My roommate, who works for Trump’s campaign, told me he could get me in if I wanted to join him. Thinking it would be interesting to write about, I agreed to tag along.

Upon arrival, I immediately observed the demographic of the crowd. Because the rally took place in rural Wisconsin, most of the people there appeared white, older than thirty and seemingly blue-collar workers. Those we spoke to were friendly and talkative.

Rep. Tiffany gave what sounded like a stereotypical political speech to supporters, arguing Congress couldn’t get anything done due to Nancy Pelosi. He said Democrats want to “defund, dismantle, destroy,” while the Republicans work to “renew, restore and rebuild.”

This sounded very packaged, but I understood this is what you get at a political rally. Rep. Tiffany ended his speech by making a plea to people of all political persuasions to join him in voting for Trump in November.

The crowd seemed to enjoy the speeches, clapping and cheering at various points throughout.

Eventually the Air Force One landed and Trump came to the podium to speak to a very loud and excited crowd. Many were ecstatic at the sight of Trump, cheering and chanting, “We love you.”

If I had to guess, I would say less than 1 percent of the crowd wore masks, despite them being required for entry. This made me worried, considering how many people were in attendance.

Trump was aggressive on topics like trade, attacking Biden for upholding NAFTA during the Obama Administration, and arguing the new United States-Mexico-Canada Agreement is much better for farmers.

Trump said, “You got law and order on one side and chaos on the other,” and “I saved the suburbs,” in regards to the recent rioting in Kenosha over the shooting of Jacob Blake.

At about 9:45 p.m., after speaking for over an hour and a half, Trump ended his speech by pledging to uphold free speech and the right to bear arms, keep the country out of foreign wars and strengthen Social Security.

I imagine he said the latter because he wanted to make the older crowd happy, while the first three statements were meant for the supporters, generally.

If you aren’t a fan of Trump, you won’t have fun. Given how tense things are today, you’d likely have to pay a Democrat to see him. If you like Trump you will probably have fun, as everyone there seemed to enjoy the rally.

If you don’t have an opinion on him, you might have fun because of the silly things he does sometimes. However, you might also end up bored out of your mind for most of it.

If you get the chance, give it a shot, keep an open mind and you might have a good time.

Kristof can be reached at [email protected].