Taking a side during the impeachment proceedings

With a presidential impeachment on the horizon, the pitfalls of our political parties will influence the outcome 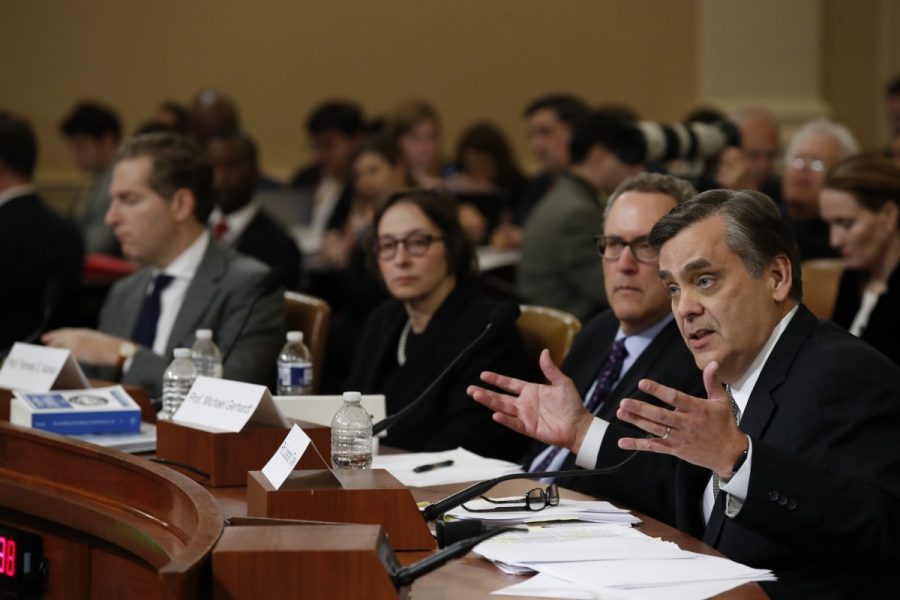 Impeachment proceedings were initiated on Sept. 24.

The House Judiciary Committee began hearing evidence from Republican and Democrat lawyers on Monday in the next step of the impeachment process. The committee will use the evidence provided to consider whether President Donald Trump’s actions with Ukraine warrant impeachment.

The White House has refused to participate in these proceedings.

Following the House Judiciary Committee hearings, the committee will vote on whether or not there are sufficient grounds for impeachment. According to the New York Times, this vote is likely to pass, as the committee comprises 24 Democrat representatives and only 17 Republicans.

Assuming the vote passes, the Judiciary Committee will then draft articles of impeachment to be approved by the majority, the Times said. These articles will then be presented to the House for further consideration and debate.

The next step is the House vote.

There are 233 Democrats and 197 Republicans in the House of Representatives. The New York Times has predicted the vote will pass sometime before Christmas. If so, Trump will be impeached.

But that’s not the end of it. Despite some common misconceptions, impeachment does not automatically mean the president is out of office.

No — even if Trump gets impeached, which I believe he will, there is still a trial that must follow. Two U.S. presidents have been impeached throughout our history — Bill Clinton and Andrew Johnson — but neither of them were actually removed from office, according to NBC News. They completed their terms as acquitted men.

So what, exactly, will it mean if Trump is impeached?

A Senate trial will follow. There, both sides will present their arguments. White House lawyers will mount a defense against the articles of impeachment, the Times said. Senators will question both sides and examine all evidence.

Following a closed-door deliberation, the Senate will vote on each article of impeachment separately, according to the Times.

“A conviction would require a two-thirds vote on one or more articles,” the Times said.

If these votes cannot be obtained, Trump will be acquitted of all charges and he will continue his presidency. The Senate comprises 45 Democrat representatives and 53 Republican representatives. The Times predicts the motion will not pass.

So after all this trouble — all those interviews and investigations and arguments — this impeachment will likely amount to nothing.

At this point, I don’t believe people are really voting out of a sense of morality or right versus wrong. Our government officials are voting out of sheer spite directed toward their opposing party.

The Trump presidency has never really been about finding the right person to lead our country, nor is this impeachment. The Democrats and Republicans in office have turned our government into a display of constant one-upmanship.

I’m fed up with this. Yes, I believe the president should be impeached. But I know he won’t because our political parties refuse to give one another what they want — like unruly children. They can hide behind their political rhetoric and exhausting bureaucracy all they want, but I know this isn’t a fight for the future of the United States.

It’s a petty dispute — the type that always results from the categorization of people and beliefs into opposing groups.

George Washington cautioned against political parties in his farewell address, according to the Mount Vernon website. He argued that groups with definable differences had a natural tendency to view the “other” as the enemy. He recognized that this dynamic often results in a power struggle between the groups.

Clearly, he was on to something.

Obviously, I’m no politician. I don’t really have the knowledge or expertise to tell our government how they should do things. But if we keep allowing our allegiances to socially-constructed political parties influence our decision-making, then this country is in big trouble.

We need to think for ourselves and form our own opinions, not blindly play “Follow the Leader.”