Student journalists are necessary now more than ever

In an era of fake news, the spread of misinformation and the 24/7 news cycle, developing the skills of student reporters is critical to democracy 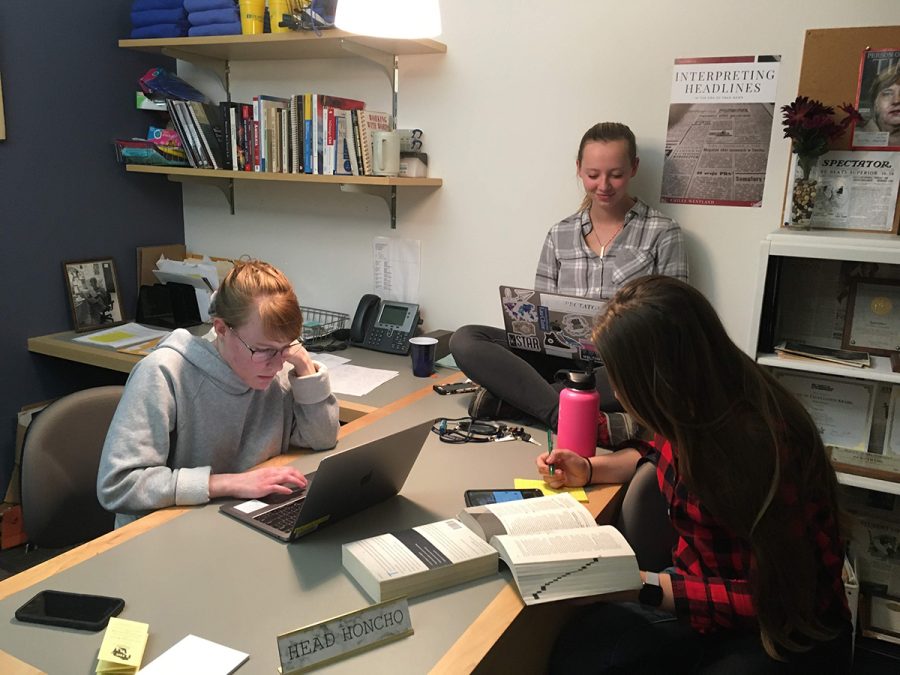 Madeline Fuerstenberg, the Editor-in-Chief; Bridget Kelley, the News Editor; and Rebecca Mennecke, the Managing Editor of The Spectator as they recently broke local news.

When I joined the staff of The Spectator in the second semester of my freshman year at UW-Eau Claire, I didn’t entirely know what to expect.

With the title “staff writer,” I anticipated writing — obviously news or potentially opinion/editorial work.  I had no concept of journalism writing, no idea what in the world AP style comprised and zero insight into what a proper interview should look like. During my four semesters at The Spectator and taking Communication and Journalism courses, I have learned that — and so much more.

Perhaps most importantly, I have learned just how critical student newspapers are to a functional democracy.

Journalism is the only profession mentioned in the U.S. Constitution (Note: “freedom of the press”), yet it is the profession that seems to suffer the most in this country. According to the Washington Post, print circulation of newspapers decreased from 60 million to 35 million copies between 1994 and today. Likewise, newsroom employment decreased by 40 percent from 1994 to 2014.

2,000 journalists have lost their jobs in the past 20 years, according to William Anderson at The Nation.

The question is: why is student journalism important when the industry seems to be going downhill?

The answer: fake news and the spread of misinformation.

64 percent of U.S. adults say “fabricated news stories cause a great deal of confusion about the basic facts of current issues and events,” according to a Pew Research Center study. 62 percent learn the news from social media.

Many Americans participate in the sharing of fake news; 23 percent of Americans say they have shared a fake news article, according to the Pew Research Center.

Journalism, known as the Fourth Estate of our democracy, is crucial to understanding what the government does — and perhaps more importantly, what government and other high-power institutions have to hide.

Student journalists train to report on and avoid fake news, which reverberates in media around the globe today. Reporters do the challenging work of ensuring the public knows the truth of the government and those in power; they hold power accountable.

Student journalists often have the unique opportunity and perspective to report on issues that are relevant to students and community members.

When the head editors of The Spectator, including myself, reported on the racist Snapchat conversation that broke between members of the Blugold football team, we were the only news source in the area who released the players’ names because we were the only news station who could verify the names without infringing on the Family Educational Rights and Privacy Act (FERPA).

This is one of the highlights of student newspapers. According to The Daily Campus, student journalists “are enrolled in a myriad of academic programs which help them bring insight into every collective edition of a newspaper. Contributors and other writers form a very diverse group that expresses the voice of the student body and their generation.”

We as student journalists have unique involvements that other journalists do not have. This offers us interesting perspectives into issues within universities and in the community as a whole.

Another key thing: student journalists are often unpaid. At The Spectator, the staff has been accepting no pay for any of their work for nearly a decade. Yet, we report important local news — including details that many news organizations simply don’t have the resources to gather.

“They’re the next generation, and they’ve been picking up the slack of gutted local newsrooms and indifferent national outlets,” according to The Nation.

Staying informed is crucial to society. It hoists the truth as important and necessary. And in order for any of these things to be true, student journalists need to be an important part of American universities.