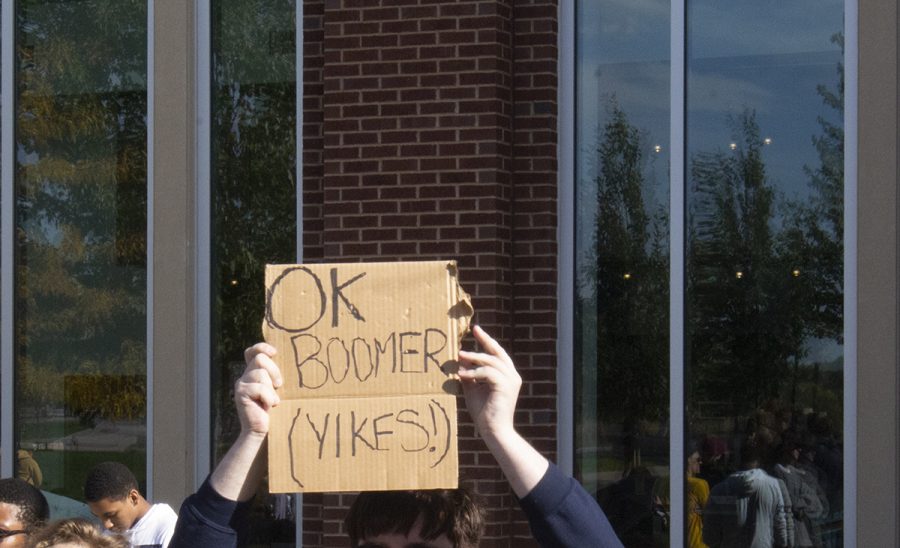 “OK, boomer” first sprung to life on the lip-syncing app known as TikTok.

Rising to popularity over the past few months, “OK, boomer” has become a common hashtag on Twitter and other social media as a meme response.

The phrase first came to popularity as a retort to people who may share the typically more conservative beliefs of the baby boomer generation.

It especially seemed to catch attention after a New York Times article brought the aggression to light and a New Zealand parliamentarian threw out the phrase during a debate about carbon emissions.

According to Gen HQ, baby boomers are people born between 1946 to 1964. Generation X was born from 1965 to 1976, with millennials following from 1977 to 1995. The exact line between millennials and Generation Z is unclear between sources, however, Gen HQ places the beginning of Gen Z around 1996 and the end as yet to be determined.

While it is largely unclear just who started the trend, it first rose to popularity on the lip-syncing app TikTok. This app is commonly used by people who fall under the Gen Z and Millennial categories.

On the various short videos made by teens and young adults, many feature audio and scenarios of someone typically older saying or doing something that the young person does not agree with, to which they respond, “OK boomer.”

Typically, these scenarios will feature someone making a comment about a controversial topic — usually along the lines of tattoos, piercings, clothing trends and even using planned parenthood facilities.

While it is true that Gen Z and Millennials are less conservative than their preceding generations, the resulting backlash from those in the baby boomer generation has driven something of an age-dictated wedge between the generations.

The exact cause of this anger or dissent with the baby boomers is unclear, although there are a few possible reasons that would make sense.

One reason could be a response to the “snowflake” nickname that Generation X and the baby boomers threw at millennials and Gen Z, which existed as an insult towards young people now because the older generations, in general, feel that young people are too thin-skinned or sensitive.

Another reason for the anger could be financial circumstances.

According to CBS News, millennials are coming into life with a lot less income than their parents had, with higher student loan debt and fewer opportunities than previous generations.

This lack of funds has also resulted in multiple accusations of “killing industries” since millennials, and now Gen Z who is following in their preceding generation’s footsteps, simply can’t afford things like diamonds or houses like their parents could.

Yet another reason for anger, as shown in a TikTok posted in an article on USA Today, is that the boomer generation simply made the futures of millennials and Gen Z unsure and unstable.

After all, the housing market is dismal, the environment has started to tank and other reasons most likely contribute to the anger.

There is a lot to be angry about, but how much change will be achieved by this trend?

I think the shock reaction from “OK boomer” has started to really show just how discontent Gen Z and millennials are with the situation they’ve been handed by their parents.

I can only hope that it will cause the changes my generation desires — like climate action and housing opportunities — since it seems that not much else has worked at this point, but I am not all too hopeful.

What this whole fiasco comes down to is ultimately exhaustion. Exhaustion at how few of those people in power — who are often boomers or part of Gen X — are willing to listen to our concerns and do something about them.

Instead of trying to talk and compromise between this generational gap, it seems now that the effort is not worth it to the young people of the nation. So, instead, they have resulted in a clapback that encapsulates their frustration with inaction from those in power.