A twist in expectations for the big apple 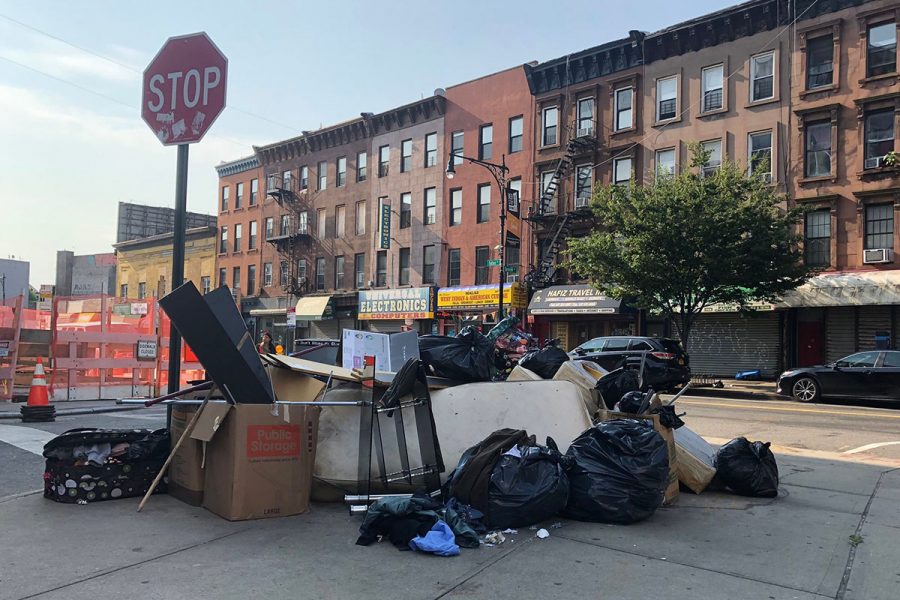 A main source of the garbage mess is the city’s system of picking up garbage curbside instead of allowing buildings to set their trash in larger bins off the sidewalk.

In March 2018, I took a trip by bus with my high school choir to the grande concrete jungle: New York City. Before I even got on the bus, I had this whole idea of what the city would look like, smell like, even feel like.

I visualized NYC to be this beautiful setting with a million winding streets and tall, beautiful apartments and buildings overlooking the city. I had thought I might see more homelessness than I’m used to — coming from a small town in Minnesota — but that didn’t stop me from believing the city would be able to manage its beauty well.

In fact, because the city is so big, I first thought there would be a well-maintained waste management system to keep the city in good living condition. Boy, was I wrong.

When I first got to the East coast, we dropped our luggage off in our New Jersey hotel and immediately got back onto the bus to head into the city. We couldn’t help but blare “Empire State of Mind” by Alicia Keys to set the mood for what we were about to see.

As we entered the Big Apple, I was stunned, but not in the way I expected to be. As we drove down the crowded street, I saw the tallest buildings I had ever seen — they were, in fact, beautiful — but what wasn’t beautiful was the infinite piles of garbage lining the streets I previously thought were made of gold.

New York has a substantial amount of trash on its streets and it’s a serious problem.

According to an article by The New York Times, New York produces a lot of garbage partly because the city’s population has grown in the last decade to over 8 million people. With this, around 12,000 tons of trash and recyclables are produced every day. Yikes.

The sanitation department of New York is the largest municipal waste operation in the country, with about 8,000 uniformed sanitation workers, and a $1.7 billion annual operating budget, according to The New York Times.

About a quarter of the waste goes to waste-to-energy facilities, and the rest is sent to landfills in central New York State, Pennsylvania, Virginia and South Carolina, according to the article.

Benjamin Miller, a consultant for the New York City sanitation department, said a main source of the garbage mess is the city’s system of picking up garbage curbside instead of allowing buildings to set their trash in larger bins off the sidewalk.

I understand that New York is big, it’s enormous and holds millions of people. Because the population is so large, the state of New York should have a better handle on its waste management, but right now that’s not the case.

A good solution would be a pneumatic waste-removal system, according to an article by City Lab. The article proposes these pneumatic tubes present the potential to streamline all of the waste efforts and make trash collection easier, cleaner and greener.

Pneumatic tubes are technical equipment in which containers are propelled through a complex network of tubes by compressed air or by vacuum, according to a Pneumatic Tube System’s website.

Essentially, if someone were to throw a piece of garbage, or an apple core or something on the ground, it would be sucked into a giant vacuum beneath the streets of New York and collected to one spot.

This is a great idea, but honestly, it’s not entirely realistic. In fact, that’s borderline a utopian society.

But at least it’s an idea to try and help the garbage issue of the city that should look as beautiful as I wanted it to be when I arrived for the first time.