No discrimination in the workplace 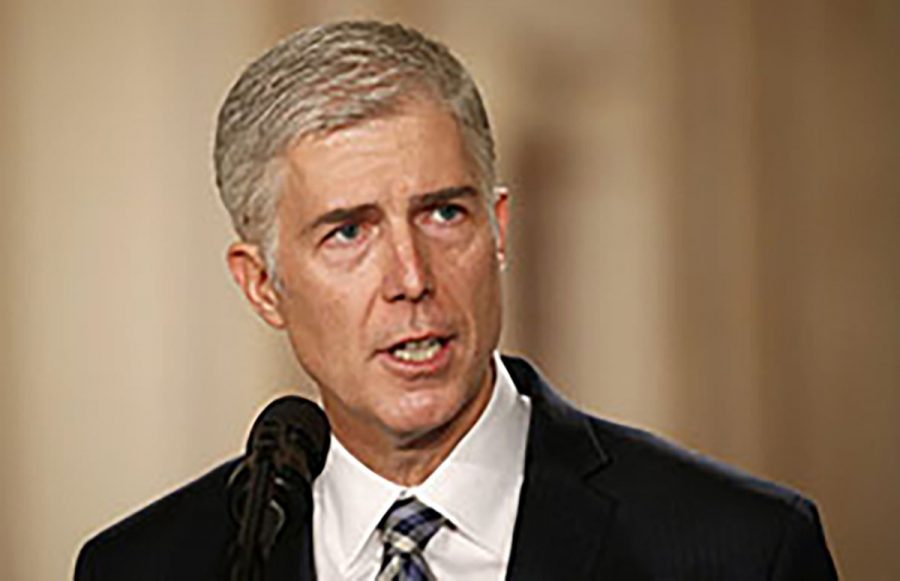 Neil Gorsuch speaks after U.S. President Donald Trump nominated him to be The three cases considered have two gay men plaintiffs and a trans woman plaintiff. Associate Justice Neil Gorsuch seems to have the final say in these cases

The Supreme Court dealt with three cases on Tuesday concerning whether or not it should be allowed to discriminate against workers regarding their sexual orientation or gender identity.

In a surprising turn of events, Neil Gorsuch — an Associate Justice of the Supreme Court — may be the one to push through anti-discrimination laws of LGBTQ people in the workplace.

Gorsuch was nominated into office by President Donald Trump after Antonin Scalia — the former Associate Justice — died while in the position.

Gorsuch is in a critical position as a swing vote regarding this issue. With the other justices sticking to their parties’ typical beliefs, he will most likely be the deciding vote.

Gorsuch calls himself a textualist, meaning he believes whatever is said in the text of a legal document is what should be upheld, plain and simple. Textualism — according to the Congressional Research Service — is about choosing to side with the objective meaning of the text.

These cases concern Title VII of the Civil Rights Act of 1964, which was created to identify and prevent discrimination in the workplace against workers for their race, sex, religion, color or national origin.

The arguments for Zarda and Bostock, according to Vox, are that the two plaintiffs — both gay men — were discriminated technically by sex because if they were women, they would not have been fired for preferring relationships with men.

For the Harris Funeral Homes case, a transgender woman was fired for not dressing as a man would. This case also brought up mentions of contentious issues for transgender people relating to things like bathrooms, sports and dress codes.

In terms of textualism, this is why Gorsuch spoke in favor of ruling discrimination against LGBTQ workers illegal. In terms of sex, the plaintiffs were technically discriminated against.

However, some of his reasoning for why he defended the plaintiffs is somewhat erroneous. In fact, it may be too soon to be hopeful for a positive ending for the LGBTQ community.

Gorsuch said “massive social upheaval” from the LGBTQ rights movement was a reason to avoid ruling in favor of the plaintiff in Harris Funeral Homes.

In itself, this is a poor legal argument. As said by Pema Levy, a reporter at Mother Jones and correspondent for Newsweek, Gorsuch is considering the wrong impacts.

“Does he think Brown v. Board of Education was wrongly decided b/c (sic) southern whites threw a fit over it?” Levy said in a tweet. “The whole point of civil rights is that the upheaval doesn’t matter.”

Despite the fact that there are more conservative justices than liberal ones on the Supreme Court, there is some hope for the LGBTQ community to come out on top with this ruling. However, it wouldn’t be wise to be too hopeful in this instance.

For Zarda and Bostock, it is most likely that these cases will rule in favor of the plaintiffs. It was difficult for the opposition to totally separate sexual orientation from sex, which therefore would violate Title VII.

For Harris Funeral Homes, however, this will most likely be another case of transgender discrimination in the United States.

As disheartening as it is to see, transgender rights in the United States still have a long way to go. While the liberal justices support the plaintiff, this case will likely go in favor of the employer without the vote of a conservative justice.

Regardless of sexual orientation, gender identity, race, religion, etc., no one should be fired for being different. Without their jobs, the plaintiffs’ livelihoods are put at risk.

Regardless of what someone may believe in, no one should have to be afraid of losing their job for sharing their identity. If the employee does the work right and is respectful to their peers, then there is no reason why they shouldn’t continue to work at that establishment.

Whatever ends up happening with the three cases, these rulings will be very impactful in the United States’ growth as a nation. Hopefully, this can become a step forward rather than a step back.