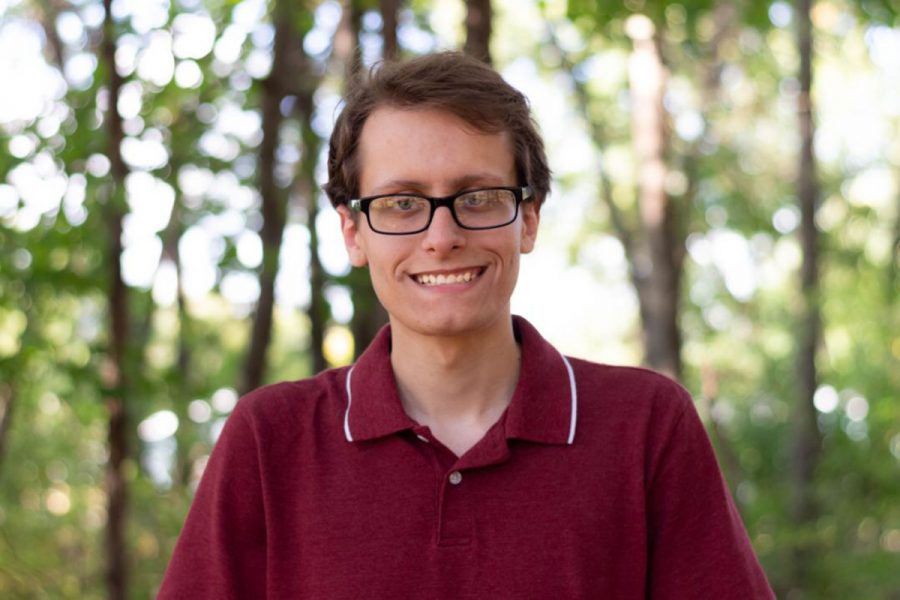 Aaron Huber is a third-year computer science and psychology student at UW-Eau Claire, and when it comes to mathematics and technology, he’s your guy.

Hello and welcome to the first ever article for Blu’s Clues. To give a little background, Blu’s Clues is a spotlight for those individuals who are particularly interesting, unique or incredibly talented in more ways than one, around campus.

I chose to spotlight him because I have heard from fellow Blugolds that he is extremely smart when it comes to mathematics and technology.

Huber said there were a few reasons why he chose to double major in computer science and psychology. He said he was interested in both subjects, but also a little indecisive about it.

From Rhinelander, Wis. — home of the “Hodag” hoax/legend-based mascot — Huber said he chose UW-Eau Claire because he wanted to go to a school in the UW System. He said UW-Eau Claire is well-reviewed and offers a wide variety of majors, as well as being his preferred size for school.

Being a computer science major, I came to suspect Huber might be a gaming connoisseur. Whether it be video games, board games or tabletop role-playing games, Huber said gaming is his biggest hobby.

Aside from gaming, Huber is also involved in two computer-related clubs on campus: The Student Association for Computing Machinery, which is aimed toward computer science majors and holds regular informative events, as well as the Gamer’s Guild, which is a casual club Huber said he joined as a first-year out of curiosity and ended up enjoying it.

When he’s not gaming or participating in clubs, Huber said he is serious about his schooling. He said he has made the Dean’s List consistently.

Huber said one of his biggest achievements so far in school — aside from scholastic achievement — is his progress in dealing with personal anxieties as a result of his college experience. He said it’s more of a personal achievement and he still has a ways to go.

Regarding the reason I chose Huber for this week’s spotlight, he said intelligence is a weird thing.

“I guess I pick up certain concepts a bit quicker than others,” Huber said. “But I’m not sure if that makes me intelligent. Everyone has certain strengths and weaknesses. I may be intelligent in the context of computer science or psychology, but below average in other subjects. Part of it might be related to areas of interest, or simply practice.”

Prior to beginning his education at UW-Eau Claire, Huber said he spent his first semester outside of high school at a technical college. He said sometimes he regrets not coming to Eau Claire sooner because of opportunities he may have missed out on relating to the first-year experience.

He also said looking back, if he hadn’t gone to the technical college, he wouldn’t have met some of his closest friends.

Despite possibly missing some first-year experiences, Huber said the one thing he would change about his first semester in Eau Claire is ordering fewer smoothies as block meals.

“They’re good, but probably not the best thing to spend on one of two meals daily,” Huber said.

After college, Huber said he plans to attend grad school in a computer science-related program, but has been keeping his options open in case he strays from his current plans.