Oklahoma bill to stop teachers from walking out? 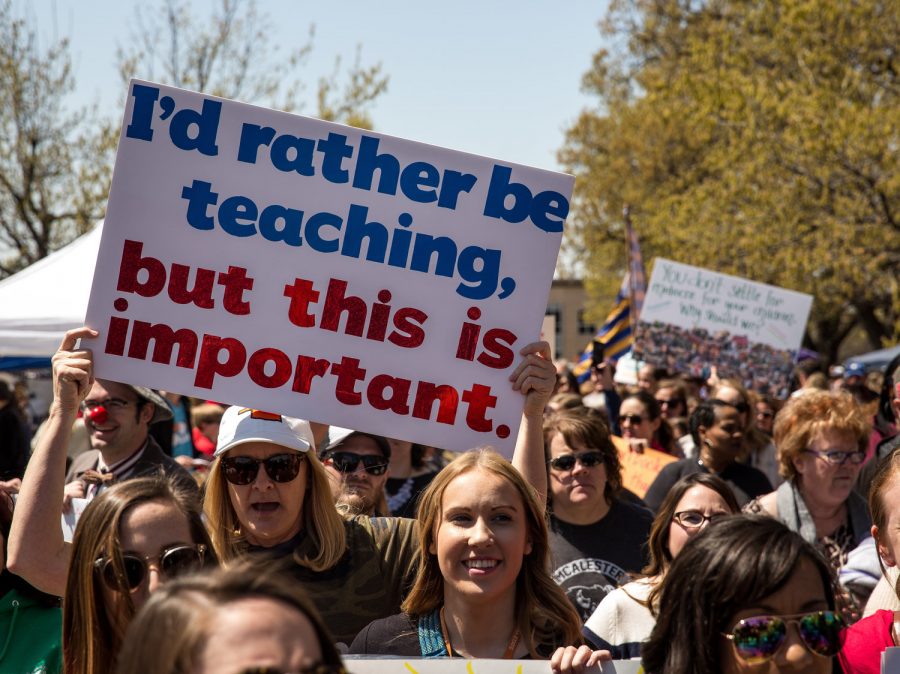 Teachers rallying for support at a walkout in 2018.

We all probably remember the Oklahoma teachers’ strike. It happened almost a year ago, and while it took nine days, they won.

OK, so they didn’t get everything they asked for, but according to The New York Times, they did get a $6,000 raise for all teachers and an overall increase in district funding.

Oklahoma teachers deserved that win. Before this strike, they were among the lowest paid teachers in the country.

Oklahoma wasn’t the only state in the past year to have a large strike or walkout among teachers. West Virginia, Arizona and, most recently, California have joined in on this movement. While all of these strikes ended positively for the teachers and thereby improved the overall quality of education for the students, there is something new in the works that could threaten future movements.

Oklahoma is in the process of passing a bill to stop teachers from protesting via walking out.

Tthe bill’s author, state Rep. Todd Russ, said the main point is to make sure kids don’t suffer a disruption in their education,” according to CNN.

While this seems like a noble explanation, it’s also necessary to recognize teachers want what’s best for their students. I mean, if they don’t care about the success and overall well being of their students, they probably picked the wrong profession.

But teacher’s needs are important too.

Think about it: If the teachers were paid enough to begin with and had adequate funding for their schools, then they wouldn’t have walked out in the first place.

Not to mention the fact that this bill seems to be opposing our First Amendment rights as U.S. citizens. Now, I know we all know this, but the First Amendment of the U.S. Constitution states “Congress shall make no law respecting an establishment of religion, or prohibiting the free exercise thereof; or abridging the freedom of speech, or of the press; or the right of the people peaceably to assemble, and to petition the Government for a redress of grievances.”

Sure, they’re not saying teachers can’t walk out if that’s what they really want, but according to the Oklahoma bill, “any person engaging in a strike, shutdown or related activities shall be denied the full amount of his or her wages during the period of such violation and if the person holds a certificate issued by the State Board of Education, such certificate shall be permanently revoked.”

I don’t know about you, but that sounds to me like a direct violation of our freedom to petition.

It’s obvious these teachers felt the only way they could be heard was to do something as drastic as walking out. Now if that right is being taken away, why would the government listen next time they’re in need of updated equipment and a raise?