When did Trump’s behavior become part of America’s standards?

As Donald Trump continues to be headline controversy, why do his actions go unpunished? 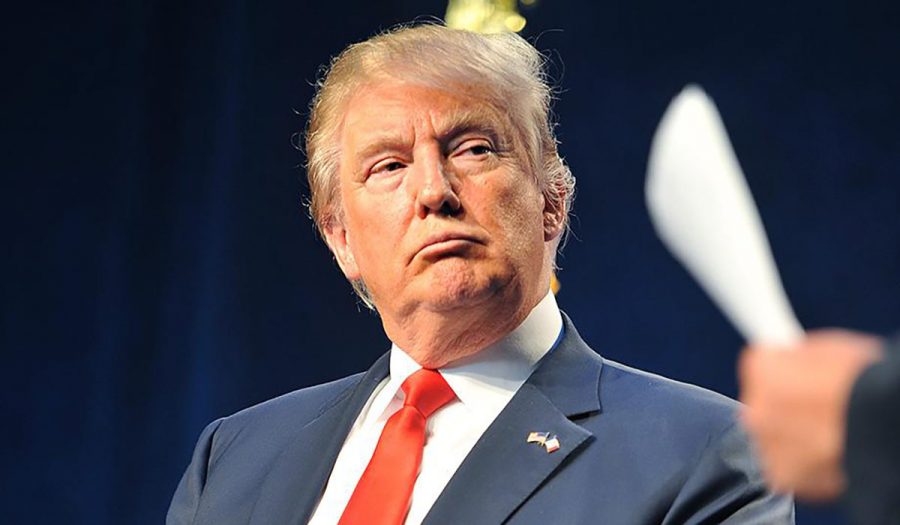 President Trump has attacked the media yet again. Will he ever be held accountable for his actions?

With almost two years of experience as president, Donald Trump has not been particularly good at making friends with citizens who ask questions. Some might say he’s actually quite awful at it. His behavior has resulted in insults toward women, those with disabilities and people of color. The amount of slander he’s produced, combined with the number of scandals surrounding him, should be enough for him to be publicly rejected and lawfully taken out of office.

However, he still holds the position of Commander in Chief of one of the most powerful countries in the world. When did the United States decide that this type of behavior could pass as reasonable?

Monday, Trump belittled ABC reporter Cecilia Vega during a press conference at the White House. After being chosen to ask a question, Vega commented that she was, “not thinking, Mr. President.”

“I know you’re not thinking,” Trump responded. “You never do.”

After, Trump bickered with Vega about whether or not the question she asked regarding the Kavanaugh investigation was relevant.

“A news conference means you get to ask whatever question you want to ask. #FirstAmendment,” Vega tweeted in response.

The president is notorious for having a not-so-loving relationship with the media. After essentially coining the term “fake news,” the two entities fight — with each one attempting to show up the other in a race to destroy. Just by Googling the term “fake news,” one can find countless articles about the occasions where the president got angry with so-called left-biased media.

His actions bring about a question: At what point did this behavior become acceptable? In late November 2017, the president retweeted fake anti-Muslim videos. The fact that he did that, however, is not mentioned until less than a year later. For many months, Trump referred to U.S. Senator Elizabeth Warren as “Pocahontas” to mock her Native American heritage, yet he will continue to claim he is not racist.

Adult film actress Stormy Daniels has been attempting to reveal Trump’s affair with her through books, records and court cases; each time she releases evidence, it’s swept under the rug the next day.

Special counsel Robert Mueller has been investigating the president’s alleged affairs and ties to Russia during his campaign run. Even after Trump’s campaign chairman Paul Manafort pled guilty to witness tampering and conspiracy to defraud the United States and Trump’s attorney Michael Cohen pleaded guilty to eight criminal charges, this controversy is still disregarded by many.

Trump’s nominee for Supreme Court, Brett Kavanaugh, has been accused of sexual assault. The alleged victim, Christine Blasey Ford, has been beyond courageous with her testimonies. On Oct. 2, at a campaign rally in Mississippi, the president mocked Ford, claiming she wants to “destroy” Kavanaugh and that she is an “evil” person for doing it.

Approaching the midpoint of his first term, Trump’s presidency has been unlike any other in American history. He has had scandals held over his head and said blatantly outlandish comments and yet still has hundreds of supporters at his rallies. So at what point did Trump cross the line into untouchable?

Those who do not support him, and possibly never have, can find it easy to bring up the evidence that proves he should not be in office. Yet, the push of those supporters has been less-than-effective when it comes to removing the president from his position. The news that can upset so many and cause viral tweet outrages still becomes old news a week later.

Former President Richard Nixon was the last president to attack the media and any U.S. citizen knows how that turned out for him. So what hall pass has Trump earned that grants him freedom to say whatever he wants, no matter how offensive, with little to no repercussions? Similar talk in other jobs would be grounds for dismissal.

It comes from the fact that the American people are letting it happen. The country is meant to be run by the people and inaction toward a problem is still action. Silence is an action that allows Trump to nominate people like Kavanaugh. Being a bystander is an action that encourages his behavior.

There are still people resisting Trump’s rule over the country and it will, one day, result in change. That change can come faster if more people stand up for what they believe is right for the nation. A passion for human rights or social justice can drive any American citizen to create a better nation.