Sensationalist headlines are an embarrassment to journalism 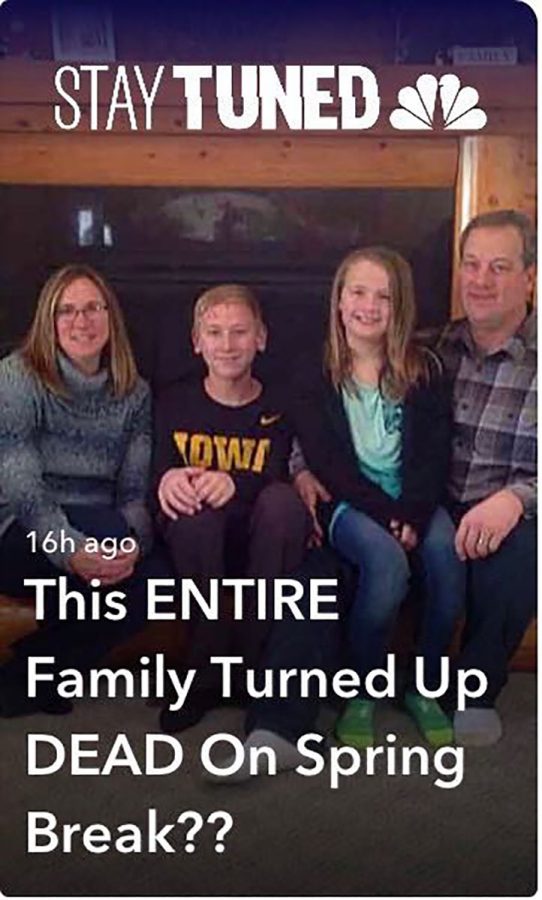 this shameful excuse for a headline appeared on the NBC Snapchat story.

This morning I was scrolling through Snapchat and I came across this headline on the NBC story: “This ENTIRE Family Turned Up DEAD On Spring Break??” Shocked not by the story, but by the format of the headline, I wondered how a major media organization like NBC could be so irreverent.

Why would the NBC Snapchat, which features a young anchor briefly covering big news topics of the day or hour, have such a ridiculous excuse for a headline? There’s no doubt NBC knows why the family died, so the double question marks are certainly unnecessary. The excessive, full-word capitalization also seems pointless from an informational standpoint.

According to the American Marketing Association, 64 percent of Snapchat users are aged 18 to 24, while only 8 percent are older than 35. Since the year 2000, the average person’s attention span has dropped from 12 seconds to eight seconds, according to Time.

It’s no secret that marketing has changed dramatically in the past 10 years. Social media sites are now the location of most advertisements I come into contact with, and many of those ads are targeted specifically towards me based on my internet activity.

The more “clicks” the NBC Snapchat story gets, the more money the company will make on ads. It makes sense that they’d change their initial attention-grabber, the headline, to something designed to incite the most interest in the casual scroller, who is probably young and has a short attention span.

I scrolled through some of the other news media Snap . The Wall Street Journal featured “Why some people are obsessed with $2 bills.” The New York Times said “Will the Netherlands Change Their Pot Policy?” The Washington Post headline was “This wine is black because it really doesn’t care about your #roseallday.”

NBC was the biggest offender: The other publications had trivial headlines befitting trivial stories, which didn’t necessarily offend my basic opinion that tragedy shouldn’t be leveraged as clickbait.

The purpose of the news is to keep people informed of issues and events in an ever-changing world — as they say, information is power. That being said, news publications have a responsibility to handle their subject matter in a manner befitting the content.

The trivialization of human life for quick clicks is a disgrace to the institution of journalism and a shameful reminder of the profit-driven, flashy digital world we live in.

I might sound like some old geezer decrying the awfulness of the Internet and those lazy millennials, but our lives are quickly being reduced to an algorithm designed to profit the media companies we are enslaved to.

NBC, yes, but Snapchat, Instagram and thousands of other platforms and corporations push push push splashy, colorful, sensationalist stories at us at every moment. We’re like flies in a spider web.

NBC, a major national news source, had the grace and tact to say “This ENTIRE Family Turned Up DEAD On Spring Break??,” as if they were some sort of YouTuber looking to monetize their vlog.

The purpose of a headline like that isn’t to inform, it’s to manipulate readers into engagement, and ultimately, to increase profits.

Congratulations, NBC. I’ll just sit and decay in the remains of my basic human dignity; I hope the increased user engagement was worth it.

A few hours later I opened Snapchat to look at the story again and re-enrage myself. The headline had changed to “Parents Did WHAT To Teen Who Refused To Marry?”