Fans want Oprah to become the leader of the free world 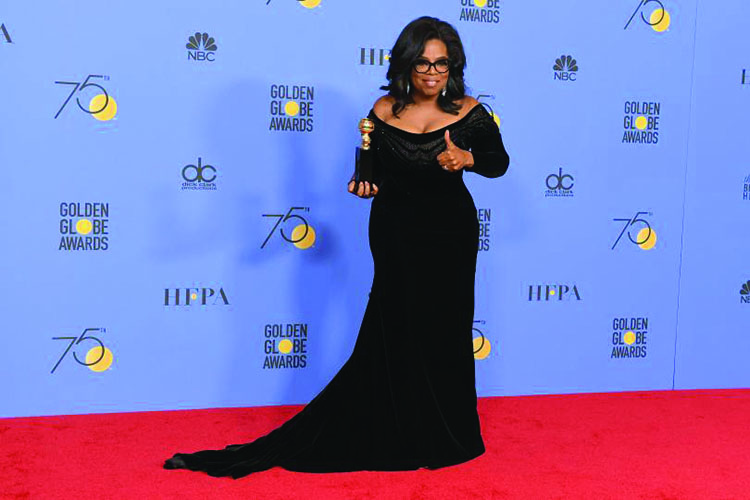 Oprah Winfrey caused a stir after her moving acceptance speech at the Golden Globes.

After giving her powerful and awe-inspiring lifetime achievement award speech at the 75th annual Golden Globe Awards, Academy Award Winning actress and talk show host Oprah Winfrey is now a popular candidate in the running for the highly coveted presidential nominee opening in 2020.

The 63-year-old media mogul, who was the first African American woman to win such a prestigious honor, was presented with the Cecil B. DeMille award on Sunday, Jan. 7, and while many of the award viewers had high expectations for her speech, Winfrey managed to outdo them.

Winfrey had the audience moved to tears as she delivered an acceptance speech that touched on African-American achievements, leadership, truth, power and abusers using their positions to hurt others.

“Their time is up!” Winfrey said while giving her acceptance speech.

Many people appreciated the speech for what it was: an important spotlight on the ways sexual assault hurts not only women in Hollywood, but women worldwide.

Even controversial neo-conservative Bill Kristol was impressed by Winfrey’s dialogue, and he tweeted out “#imwithher” in support of Oprah’s candidacy. This proves she has the ability and appeal to touch a wide range of people with different political views.

I know there might be people out there who refuse to elect another media mogul and television personality into the White House after President Donald J. Trump’s reign, but if he is able to get in then so is Oprah.

Trump said on Jan. 9 that he didn’t think Winfrey would run and he would beat her if she did.

“I’ll beat Oprah,” he said at a White House meeting — though he quickly added, “I don’t think she’s going to run.”

Which is ironic, because not long ago Trump was adamant that Oprah was someone he would choose as his vice-president running mate.

“I think Oprah would be great. I’d love to have Oprah.” Trump said during an interview with ABC’S George Stephanopoulos in 1999. “I think we’d win, easily actually.”

Now, word gets out that Oprah might be a likely candidate for the Democrats and Trump recants his prior statements and denounces Winfrey’s popularity amongst the people.

Oprah as president is something this country could benefit from, but I don’t know if she is the best candidate for office, seeing as she could potentially cause an even greater divide in the United States between conservatives and liberals. Although she might not be your first pick, she is a better choice than most potential nominee candidates would be.