Misogynistic signs were put up at a home on the corner of Second and Lake Street this past weekend. 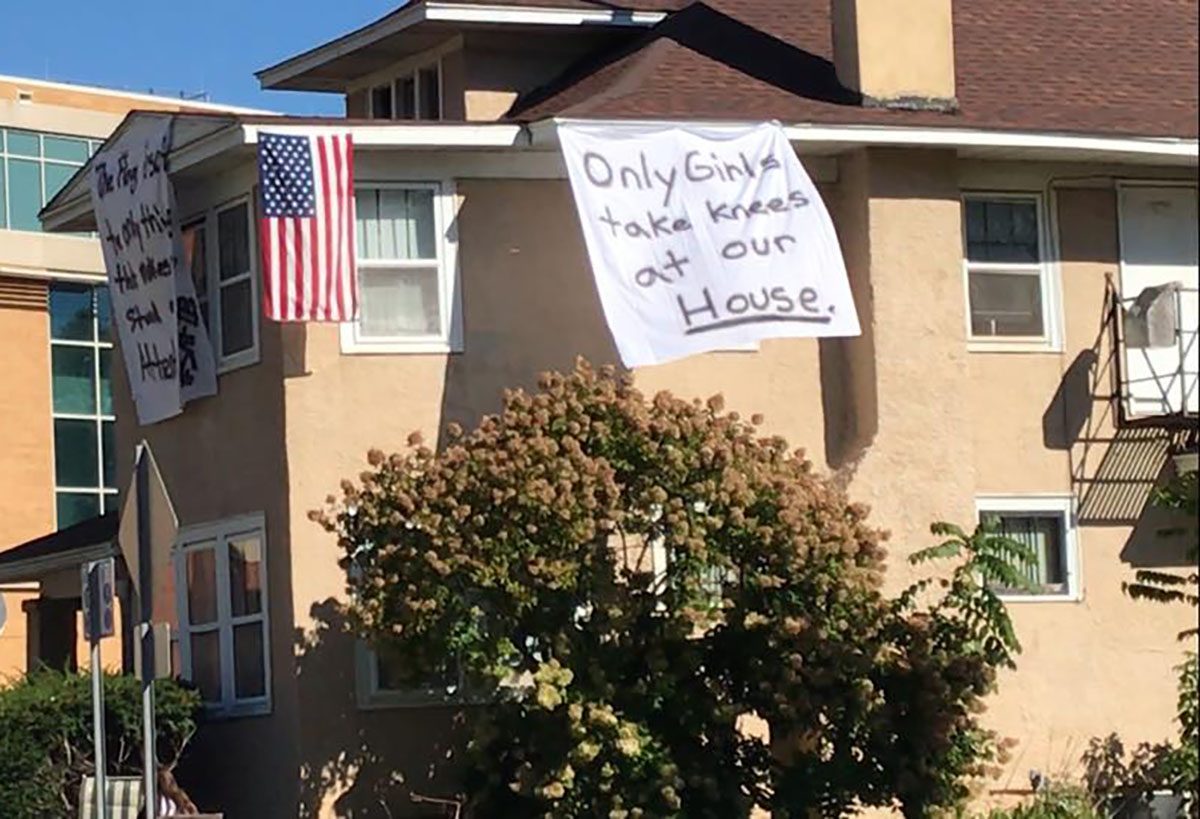 An Eau Claire community member posted this photo of the signs late Saturday night on Facebook.

Homecoming at UW-Eau Claire often brings out the best in Blugolds. We display our swift feet on the fields, our souls in our music and our school pride in a kazoo-filled parade.

This year, however, homecoming festivities were tainted by a glaring reminder that misogyny is prevalent even at our Midwestern university.

The evidence was in two white banners with black writing that read, “The flag isn’t the only thing that makes us stand at attention” and “Only girls take knees at our house,” attached to the roof of a house on the corner of Second and Lake Street, directly on the route of the parade.

I caught sight of the banners when I was walking in the homecoming parade on Saturday morning.

It doesn’t matter whether the banners were displayed as a “joke.” What matters is the way their messages are interpreted by those other than the creators.

To me, the banners convey misogyny. This has dire implications.

Both the banners’ messages are in response to the current NFL player protests during the national anthem.

While I do believe the residents of the house have the right to disagree with the protest, I do not believe they did so with respect to NFL players or women.

“Only girls take knees at our house” also implies the women who enter the house are seen as sexual objects. It is a statement that is dehumanizing and sexist.

Aggressive sexual comments like the ones made on banners here and across other college campuses add to the rape culture that plagues our campuses by normalizing disgusting comments and behavior.

This situation is worsened when I remember the children I saw watching the parade on Lake Street.

If we continue to allow these statements to be made, especially in front of children — our future — ending rape culture will become even more tedious a task.

UW-Eau Claire isn’t the only university confronted with vulgar banners. According to USA Today, the Sigma Nu chapter at Old Dominion University in Virginia hung banners that targeted first-year women off the side of their house in 2015. The Old Dominion administration issued a statement and the fraternity was suspended.

Closer to home at UW-La Crosse and UW-Oshkosh, banners with sexist messages were displayed on the front of off-campus houses in 2016. The administration at La Crosse issued a statement about the issue and held a teach-in about sexual assault issues.

In Oshkosh, the residents’ landlord was contacted in effort to get the banner removed.

Eau Claire city councilwoman Catherine Emmanuelle commented on a community member’s Facebook post Saturday evening at 4:52 p.m. She said she had contacted the police and the signs had been taken down, thanks to the attention social media had brought the banners.

I hope UW-Eau Claire uses the banner incident to reflect on the behavior we deem acceptable and move forward with newfound thoughtfulness and empathy.