Love, unity and confidence — for profit 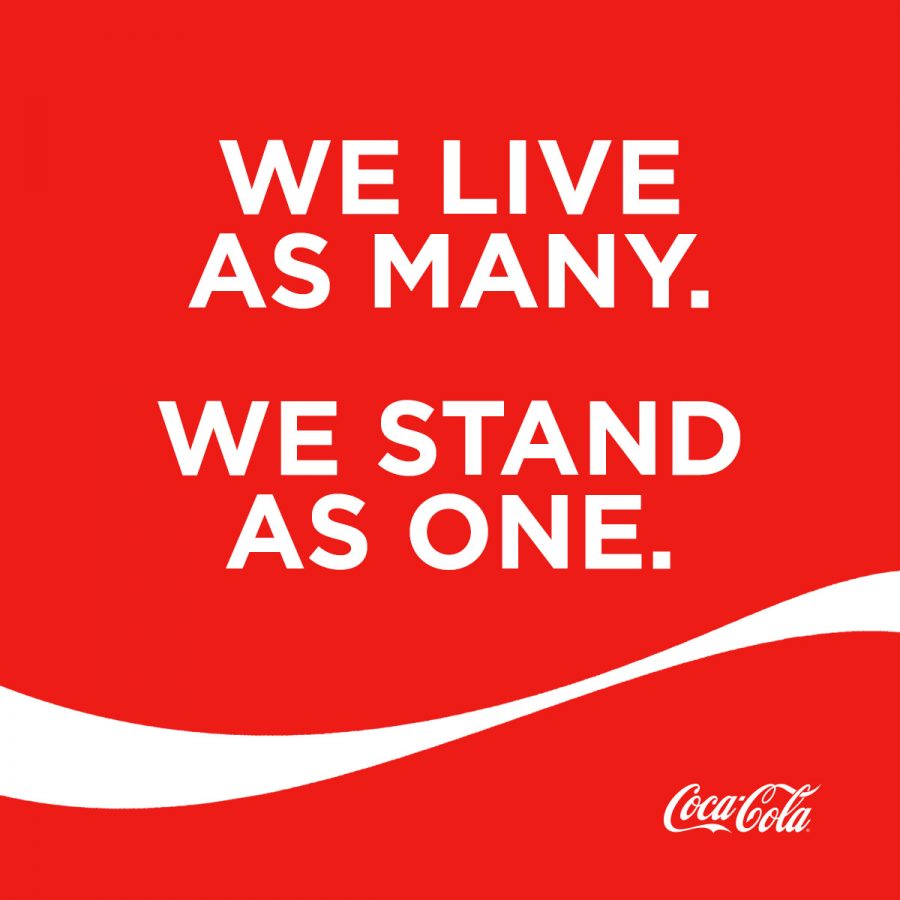 Coke often promotes unity or peace in their ads, but ultimately they want their unsuspecting consumers to purchase Coca-Cola and associate it with such universal concepts.

We live in a capitalist nation. Sales are what we do.

Research has shown consumers rely on emotion over logic when deciding what product to buy. Companies have long manipulated the feelings of their prey in advertisements, notably by associating their product with abstract concepts such as love or self-expression.

In 1971 one of the world’s most famous ads came out — “I’d like to buy the world a Coke.” Chances are you can hum the jingle right now. In it, a beautiful, diverse group of people stand on a hilltop drinking Coke and singing about love.

With that iconic advertisement, an entirely new, and ingenious, method of marketing was born.

Coke became more than a refreshment. It was transformed into a symbol of unity and peace. That ad sang the money-making message straight into the heart of Americans — if only everyone could be drinking Coke at this very moment, love would reign.

In the midst of the Vietnam war, it was a message America wanted to hear.

In 2016, a Coke spokeswoman said, “Throughout the history of Coca-Cola, we have stood for optimism, diversity and inclusion. Deep in our heritage is a commitment to bringing people and communities together to find common ground.”

The problem is the “common ground” Coca-Cola hopes to enable these diverse people and communities to find is Coke itself. Why? So they’ll make a profit.

Rooted in endless advertising campaigns since Coca-Cola’s original “I’d like to buy the world a Coke” advertisement is a feel-good emotion. What do companies want consumers to do with that emotion? Associate it with their brand.

Dove has been running one of the most successful ad campaigns of all time since 2004. The Dove “Real Beauty” advertisements promote body positivity, self-love and confidence. Why? So they’ll sell Dove products.

Dove doesn’t care about women’s self-esteem, they care about sales. Few other beauty product companies were trying to make women feel good about themselves at the time, so they found a new way to capitalize off a society that profits off of women’s insecurity.

Jennifer Pozner, executive director of Women In Media & News, said, “(Dove products) could not possibly exist if women as a demographic believed the principles at the campaign’s core. Cellulite cream would not exist if women believed they were beautiful and enough as it is,” in an interview with Huffington Post.

They didn’t fix the problem, they used the problem — companies capitalizing off of making women feel bad about themselves — to elevate their brand. If Dove makes women feel good, women will buy their product.

This advertisement technique is nothing new, and it’s not that clever anymore. Perhaps the biggest misstep in recent history is Pepsi’s poorly executed advertisement co-opting protests.

Pepsi didn’t take any sort of stance, they basically just said “hey everyone, protesting is cool now, and so is Pepsi.” It was grotesque, to say the least.

Chevy has done it, along with Budweiser, Extra gum, MetLife bank and a host of other companies seeking to turn their brand into an emotion.

If Coke didn’t make money selling unity, you can bet your bottom dollar they wouldn’t be selling it. If Dove didn’t make a profit selling self-esteem, they wouldn’t be doing it. Company after company has “taken a stand,” but in all reality, they’re just manipulating the consumer into purchasing their product.

The more money these corporations make from co-opting social justice movements or concepts such as peace, the more bankrupt they become morally.

The next time you want to share an advertisement promoting a “good” concept, take a moment and think about what the company is getting out of it. Probably millions of dollars from people who now associate drinking a Coke or a Pepsi or a Budweiser with taking a stand for togetherness and love.

There is no love in manipulating people’s emotions for profit, there is only greed. There is no honor in turning selfless, wholehearted concepts into advertising campaigns, only gluttony.

Is there anything more insidious than pretending to care for personal gain? You decide.