Milk substitutes are not the same as milk 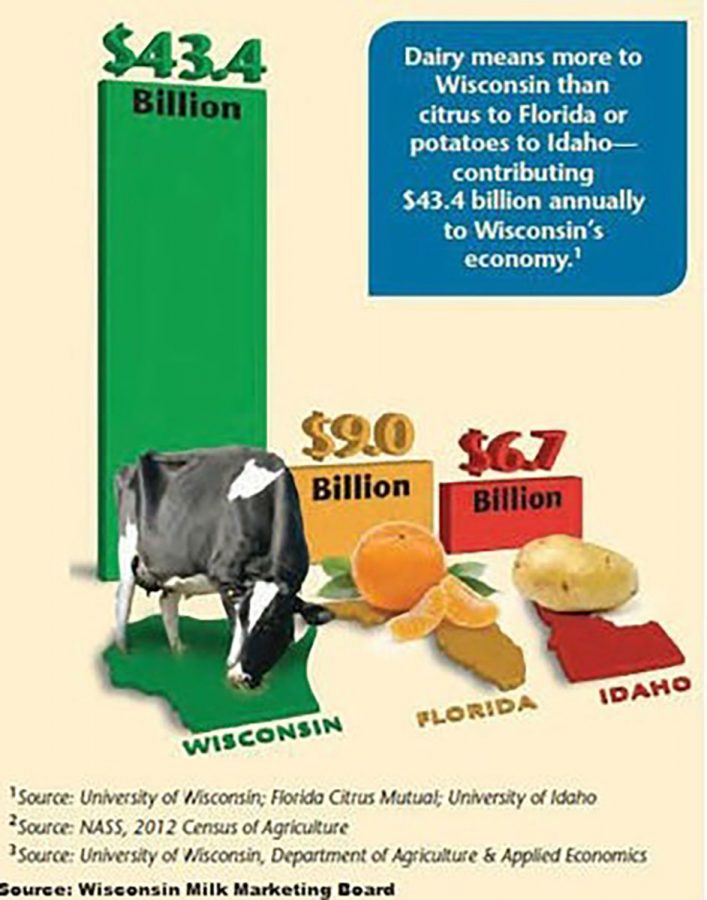 There are a few things that Wisconsinites take pride in: beer, withstanding the frigid cold, the Packers, but chief of them all is dairy.

Wisconsin is truly America’s dairyland, with  3.4 billion gallons of milk produced each year, and 3 billion pounds of cheese, according to the Wisconsin Department of Agriculture, Trade and Consumer Protection (WDATCP).

However, dairy substitutes have been edging in on cow milk’s territory for years. U.S. almond milk sales went up by over 250 percent from 2010-2015, while dairy milk sales shrunk, according to the Nielson Company.

If people are going to replace dairy milk with almond milk, or any other dairy substitute, then they should know the difference between the two.

Almond milk is essentially a glass of water with a multivitamin. A carton of almond milk contains maybe one handful of almonds, which means the real benefit of eating almonds, protein, is virtually absent, according to an article in Business Insider. Any health benefits that almonds may have naturally are not to be found in almond milk.

Any benefits that drinking almond milk provides are benefits that were added artificially. Almonds aren’t as rich in vitamin D as that carton would lead you to believe. Meanwhile, dairy milk is naturally rich in these vitamins and minerals.

Milk and milk products provide calcium, vitamin D, phosphorus and potassium. It can be difficult to find other foods that meet these same nutritional standards, according to The Mayo Clinic.

The only dairy substitute that is mentioned in the Dietary Guidelines, which is a list of health recommendations issued by the U.S. government every five years, is soy milk. The current guidelines recommend increasing dairy consumption and state that most Americans do not get enough of this food group.

96 percent of Wisconsin farms are family owned, and dairy contributes 43.4 billions of dollars of revenue to the state annually, according to the WDATCP.

U.S. Sen. Tammy Baldwin (D-Wis.) met with a group of Wisconsin farmers on Jan. 28 to discuss her DAIRY PRIDE Act, which was created to enforce current Food and Drug Administration’s regulation to properly label milk, yogurt and other dairy products, according to an article in The Chippewa Herald.

The DAIRY PRIDE Act would require the FDA to issue guidance for substitute dairy products that are incorrectly labeled within 90 days, and report to Congress. This is already a law, but it is not being enforced, which has lead to a decrease in dairy sales, said Baldwin, according to the aforementioned article.

This act is one that would benefit Wisconsin families, Wisconsin health, and the Wisconsin economy.

Dairy milk substitutes that do not meet the same health standards as milk should not be given a free pass into the same category as real milk products, and if they continue to do so, they will impact Wisconsin in a definitively negative way.

We are America’s dairyland and have been for hundreds of years. We can’t let faux dairy corporations take our family owned businesses in the name of false health benefits.

Almond milk is not milk. It’s time to stand up for ourselves.