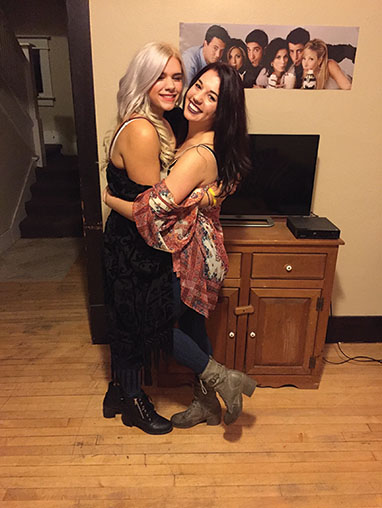 From someone who can vouch for the importance of genuine female friendships, the comment section of Instagram is not the place for it.

As as a single college senior, I can easily admit that my lady friends have lifted me up and given me an immeasurable sense of purpose in comparison to any of my past romantic relationships.

Naturally, I support Rebecca Traister of The New York Times who said in an article: “Among the largely unacknowledged truths of contemporary female life is that women’s foundational relationships are as likely to be with one another as they are with the romantic partners who, we’re told, are supposed to complete us.”

Women building each other up isn’t a new idea, but it’s been a prevalent topic in my social realm more recently as well as in modern literature.

An excerpt from Canadian feminist poet, Rupi Kaur, explores this idea in her 2015 poetry collection “Milk and Honey” that blew up the internet this past year.

She writes, “we all move forward when we recognize how resilient and striking the women around us are”.

As she suggests, it’s crucial to celebrate each other, but rarely does that occur in the form of Instagram praise.

In the past year my Instagram feed has been bombarded with little fire emojis left under girls selfies (because they’re lit) and below that, comments ranging from “OMG SLAY” to “ugh stop being so hot”.

While these comments may be coming from a place that wishes to express sincerity for others’ appearance and style, at best they come off as pretentious.

Roxane Gay told us to  “Abandon the cultural myth that all female friendships must be bitchy, toxic or competitive.” in her book, “Bad Feminist,” but overdoing the love in this way can just end up having the opposite effect.

If these comments are from the heart and attempt to show love for other females who are killing the game, not only should they be used sparingly to avoid sounding vapid and redundant, but the energy they take to type could be better directed elsewhere.

It’s not only the content of the comment that’s problematic but the idea that it’s left there for more than just the person in the photo to see.

In this sense, I can’t help but feel these comments are a coded way of publicly proclaiming friendship, which just further promotes the toxic energy too often associated with female friendships like Gay suggests.

I see this happen more prominently in women who aren’t that good of friends in real life, but are friends on Instagram. The obvious attempt to assault each others photos with praise hints at a prevalent undertone of envy.

Instead of scrolling through your Instagram feed liking and commenting on all your girlfriends posts — go read their blog, support their organization’s fundraiser or cheer them on from the sidelines while they complete their first half marathon.

Sure, your friend or acquaintance might crack a smile at the string of emojis and all caps quips you left on her latest pic, but she’ll smile even wider if you simply compliment her to her face or about something not involving her appearance.

These acts are more successful in promoting the supportive and loving female environment we’re striving for than typing out a line of forced compliments just so you’ll come across as friendly.

Just as Total Sorority Move tells us to cool it with the comments on all of our boyfriend’s posts (we get it, you’re dating), there’s no reason the same rule shouldn’t apply to our gal pals either.

We claim that what’s on the inside matters more than our physical appearance and get upset when our worth is measured by our beauty, but our actions say otherwise. By praising our friends’ appearance in the form of these comments, we’re also validating the stereotype we supposedly loathe.

So if you must comment, save it for a pic that’s truly stellar (and please look up the word overkill). I get it; some days outfits and hairstyles are too good to go unseen, so by all means, give ‘em love. But when you do it on every single post, your attempt to appear sincere is taking an utter flop.

Women all around us are doing big important things everyday that make a larger impact than our soft smiles on instagram, so let’s shed a little more light where it’s truly needed.