Instead of being pushed and shoved trying to get the best deals, opt for shopping online 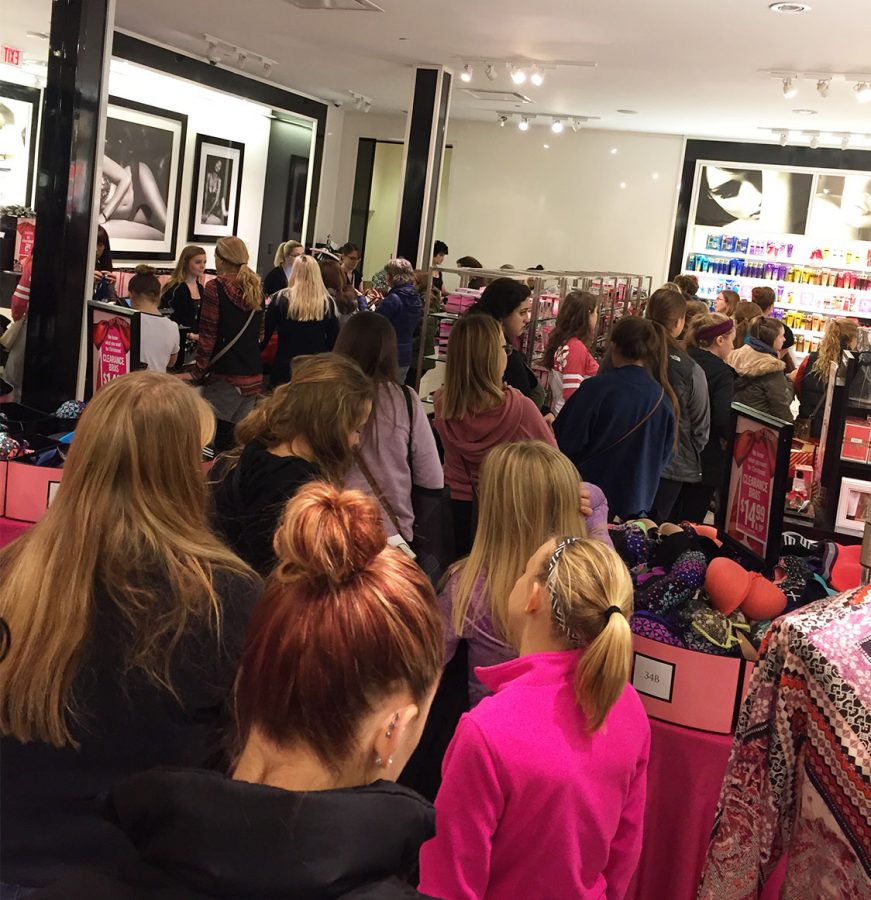 Women of all ages wait in a long line to purchase items on sale at 6 a.m. during Black Friday at Victoria’s Secret.

The day after Thanksgiving used to mean recovery from all the overeating accomplished the day before. However, over the years, it has become a day where people all over the United States stand in long lines, camp out and even throw a few punches for the best deals on iPads, TVs or anything with a big price mark-down.

This day is now known all over the world as Black Friday, the biggest shopping day of the year.

I absolutely love Black Friday shopping. There’s something about the rush of heading to the mall at late hours to try to find the best deals on everything I could possibly want or give to someone for Christmas.

There is a downside with such great deals available for only this one day however; the stores are packed, full of bargain hungry consumers and it can get a big aggressive.

Last year on Black Friday, I headed to a store to get my hands on some 50 percent off boots. The doors opened at midnight on Friday so I made sure to get there early enough.

As soon as the doors opened, a whole crowd of determined people sprinted to the shoe department and pushed and shoved their way through. I am usually pretty good with large crowds, but not that day.

I ended up with my head between my knees sitting in the corner of the department store having a panic attack from all the chaos.

An issue with stores opening at midnight on Friday is that people are skipping their Thanksgiving dinners and missing quality family time by standing in line at the mall trying to get their hands on the best possible deals.

I’m guilty in this having left Thanksgiving dinner early just so I could go to the mall and get 50 percent off sweaters at American Eagle or snatch $10 bralettes at Victoria’s Secret.

I will never forget the disappointed and saddened look on my grandma’s face when I stood up from the dinner table immediately after I finished my meal and put on my jacket to head to the mall.

People are forgetting what is important in the holidays: It’s about spending time with family and being with loved ones.

Malls have already started to see this issue and have changed opening times so that families can stay together on Thanksgiving rather than be shopping.

This is another reason for Cyber Monday’s creation. People can now participate in all the fantastic deals with just a click of the mouse. Shopping online is much faster and safer than going to malls at late hours and being trampled by crazy money savers. It’s definitely better than waiting in line.

My message to you all is to take a step back and evaluate your priorities. I’m not asking you to stop shopping on Black Friday altogether because of course you should participate in all the great deals.

Perhaps, think about your family and the true meaning of Thanksgiving. If you must shop then shop online for ten minutes in the comfort of your own living room while surrounded by loved ones (where you won’t get trampled, may I add).