In the face of a heated general election, Spectator writers debate whether college should be free 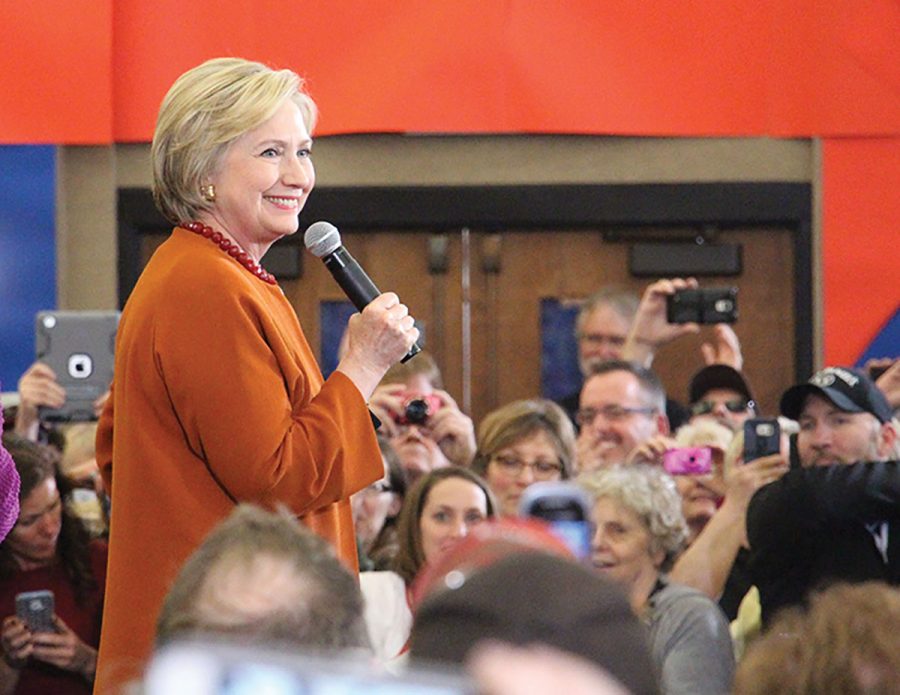 Hillary Clinton campaigning in Eau Claire Spring of 2016. Clinton's proposals for college tuition have changed during her campaign

Many college students have experienced the stress of student loans, requiring a business mindset in order to achieve their diplomas. According to The Institute For College Access and Success, the average debt of 2015 UW-Eau Claire graduates was $26,475. Of those 2015 graduates, 70 percent reported having debt. This is just Eau Claire, a public state university.  For some, the burden of debt can be even worse. Discovering a solution can be tough and the debate over whether college should be free or not is playing a huge role in each candidate’s appeal to students.

Free college tuition is a right:

Everyone has heard their fair share of horror stories: Students graduate college, only to struggle in finding a job that pays enough to cover their student loans.

Post-grad is not a fresh start for all students. After the joy of graduating college comes a stark reality; that diploma isn’t cheap for many students.

Education is the key to becoming competitive in the global economy. It is crucial for the U.S. to have a workforce that is well-educated in order to succeed. However, college has become a double edged sword.

While a college diploma can lead to a higher paying job and a more skilled workforce, it is also leaving students with heavy debt.

According to the Federal Reserve, America’s total amount of student loan debt in 2015 was estimated to be about $1.3 trillion, over 39 percent higher than it was four years prior.

Often times, student loans have students graduating with a load of debt to carry into their futures. This burden lands not only on the student, but the economy in general.

Other students who are unable to afford college miss out entirely.

Bernie Sanders, democrat and former presidential nominee, was popular with college students after he presented the idea of entirely free college during his run for presidency.

According to the Sanders campaign site, his $75 billion a year plan would have been funded by “Wall Street speculators who nearly destroyed the economy seven years ago.” These speculators would be taxed merely a fraction of a percent to provide free tuition to students.

After Clinton beat out Sanders, the two joined forces in order to create a new plan which Clinton calls the “New College Compact.”

The plan states public college would start out free for households making under $85,000 a year, until 2021 when families that earn less than $125,000 a year would also qualify. She would also cut down on student debt, allowing students to refinance their current debt and lowering interest rates on future loans.

More and more of today’s jobs are knowledge based and require technical skills. According to the U.S. Department of Education, 2013 estimates suggested young adults in America earn over 60 percent more if they have a bachelor’s degree compared to entering the job market with only a high school diploma in hand.

More students attending and graduating college would not only be a benefit to our workforce, but the economy as well.

If students are leaving college with mountains of debt, the increase in pay isn’t allowing them to get a leg up in life. Instead, they’re stuck paying off student loans greater than their yearly salary.

College students today are juggling jobs and overworking themselves while attending classes, which takes away not only from their studies but their overall success.

Once they graduate, many don’t escape the financial burden for years to come.

While it is true that college will never truly be free and someone will always end up paying for it, perhaps it’s time we invest in our young generations’ futures in order to create a greater future for this nation.

According to Sanders’ website, it is estimated over the next decade the federal government will profit over $110 billion on student loan programs.

It doesn’t feel right that while the government profits, college students, the workforce and the economy suffer. While the current plan may not be perfect, at least it is a step in the right direction.

The increase in student loan debt is being called a crisis for a reason. The U.S. cannot continue to stand idly by while our young workforce suffers, or the entire country as a whole will ultimately suffer.

When did we quit believing students were our future and start treating them like they were fresh debt-free piggy banks?

These numbers are not including room and board which is typically around $16,800 for four years, UW-Eau Claire’s website says.

Once people see the numbers, it does seem overwhelming. For those of us who are full-time students at Eau Claire, our tuition is somewhere around $15,000 per year. This amount is quite steep for one person to pay on their own. However, free college isn’t the answer.

While it sounds nice in theory, free college is impractical. Student tuition and fees are funneled into several necessary parts of running an institution of higher education. These include salaries of faculty and staff, building maintenance and technological advancements meant to keep students as up-to-date as possible.

Essentially, free college for students means additional taxes for everyone. If Bernie Sanders’ intended tax plan were to continues in it’s popularity, there would be a tax on Wall Street speculators “who nearly destroyed the economy seven years ago,” His website states. This tax would be a levy on stocks, bonds and derivatives in the U.S.

In an article published NPR, Len Burman, co-director of the Tax Policy Center, said this tax increase will make investments more costly. Plus, there’s no saying how Wall Street firms would react to this tax, so the estimates of how much revenue it could generate vary from $340 billion a year to less than one-tenth of that. Sanders’ free college plan requested $75 billion each year.

If this tax he suggested only raises $34 billion, who pays for the rest? According to The Washington Post, one-third of the revenue must come from states, which will require them to prioritize education more than they currently do. The article states this money will have to come from existing funds invested in K-12 education, prisons and health care. It’s unlikely all 50 states will be willing to do this.

According to The Washington Post, Sanders’ plan will make education more accessible but over time, less excellent.

We all know how Eau Claire feels about excellence.

Because Sanders’ plan eliminates price as a factor in the allocation of “scarce educational resources,” the administrative restrictions would have to increase to keep the number of students low. Otherwise, more students means higher costs, thus increasing the aforementioned speculation tax. A higher increase in this tax is not considered in Sanders’ plan.

The goal of Sanders’ plan is to make education more accessible. However, if there must be higher restrictions on the number of students who can attend colleges or universities, it becomes completely counterproductive. A relatively low number of students will attend college, while a large number will be told they can’t. That’s exactly what is happening in our society now, just for a different reason.

A college education is a valuable commodity. With it come more numerous higher-paying job opportunities. According to U.S. Census data from 2015, nine out of 10 adults have a high school diploma or GED. Only about one out of three adults have a bachelor’s degree.

This society thrives on competition in the work force. If everyone were equal in their skill-level and knowledge, the competition for certain jobs would skyrocket, while there would be other jobs completely unmanned because everyone would be overqualified.

I know paying for college is a burden. I’ve seen the bills. I’ve seen large amounts of money come and go. While it’s not a good feeling to watch that money seemingly disappear, I know it’s being invested in something worthwhile. I’ll come out of college with a competitive edge because I will have a bachelor’s degree where someone else might only have a high school diploma.

After all is said and done, I don’t mind paying for my education. As the saying goes, you get back what you give. While I wish I could give less, it wouldn’t make sense to give nothing.