The importance of keeping the Great Barrier Reef alive 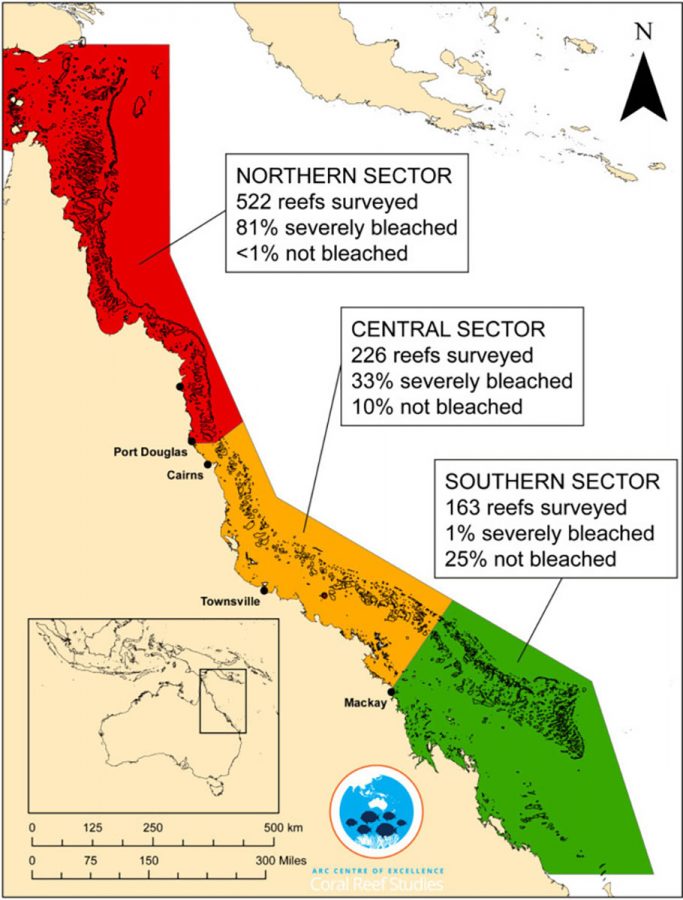 Map illustration of Great Barrier Reef destruction as a result of coral bleaching, taken from ARC Centre of Excellence for Coral Reef Studies.

As I scrolled across my social media feeds this past week, a trending topic among multiple platforms presented itself in the form of an article from Outside Online, titled “Obituary: Great Barrier Reef (25 Million BC-2016).”

Social media users alike posted their mixed emotions concerning the loss of one of the seven natural wonders of the world. However, as I filtered through media posts regarding the trending article, I couldn’t help but notice a sickly materialistic theme arise.

“My dream of #scubadiving at the #GreatBarrierReef will never happen. We killed it,” twitter user @DeannaRilling wrote.

Not to mention, after CNN revealed in a recent article that the reef’s obituary intended to be satirical in nature, social media users criticized the Outside Online for its release of false information.

This reaction from the general public focused solely on the artificial aspects of the reef’s depletion. It disregarded the topic altogether the moment it emerged as false information. Such a disregard directly correlates to the societal ignorance that allowed for such reef destruction in the first place.

The Great Barrier Reef is more than just a pretty face. It holds far more than arbitrary opportunities to scuba dive, snorkel, and photograph uniquely colorful creatures. It provides shelter to more animals than just the “cute” marine life that resemble Nemo and Dori.

This reef, alongside any given marine ecosystem, deserves more credit than a check mark on society’s cliche bucket list.

The World Wildlife Fund (WWF) states in their website that over the past three decades, Australia’s Great Barrier Reef has lost nearly half of its coral cover due to human activity. These threats include deadly coral bleaching from global warming, pollution as a result of farming and rapid industrialization, and habitat loss from overfishing of the area, including that of endangered species.

Aside from artificial concern, society must understand the vitality of the Great Barrier Reef. WWF measures this vast marine ecosystem at 344,400 square kilometers — an area “so large it can be seen from space.” It is a pillar for the survival of the environment and humans alike.

For starters, the International Coral Reef Initiative (ICRI) explained that coral bleaching is destined to result in loss for both animals and humans.

In the Great Barrier Reef, nearly 400 coral rays (both hard and soft) allow for ancient sea turtles, reef fish, crustaceans (such as crabs and shrimp), echinoderms (such as starfish), and almost 140 species of sharks and rays to flourish.

Such variety allows for the Great Barrier Reef to be among earth’s greatest areas of biodiversity. ICRI explains that biodiversity greatly improves ecosystem productivity and natural sustainability. In any given environment, each organism has a specific role to play.

That being said, the greater the organism variety count, the greater the productivity. In terms of the Great Barrier Reef, this correlates to more organisms that can regulate ocean acidification and more fish to serve as food for humans and other animals.

In addition, WWF states that coral bleaching prevents coral from performing a vital task for surrounding habitats. Healthy, strong coral serves as a protective wall for nearby ecosystems and land in the event of natural disaster. If a tsunami or hurricane brings threatening waves to shore, healthy coral has the ability to minimize wave impacts, therefore saving closeby areas from grave destruction.

If all the remaining coral becomes bleached and sick, society can count on dangerously increased rates of destruction and loss from natural disasters.

Lastly, the loss of the Great Barrier Reef will surely result in severe economic trouble. WWF states that tourism of this area reels in (literally) $6 billion in annual revenue and provides about 70,000 jobs. Continuation of “business as usual” in this area essentially guarantees eventual economic destruction to those that make a living off the reef.

Clearly, society cannot continue the deadly path we are on. We cannot comfortably sit back and watch as our deadly habits destroy such a vital habitat and pave the way for future generations of mankind to suffer. It is selfish to the environment and it is selfish to those that come after us. I refuse to be responsible for my great grandchildren’s inability to survive on a dying planet.

It is time to take initiative. Raise awareness. Research. Donate to programs such as the WWF and ICRI. Tell your friends that fossil fuels threaten to destroy far more than just the air we breathe. Speak out and encourage the government to bear down on overfishing and pollution laws. One voice will generate a ripple effect, making waves of difference.

The Great Barrier Reef may not be dead — yet. But that doesn’t mean that we should turn a blind eye to the truth. The area is in trouble, and without proper action, humankind and the environment as a whole stand to lose more than we can truly afford.