How the pipeline is impacting Native American tribes and the environment 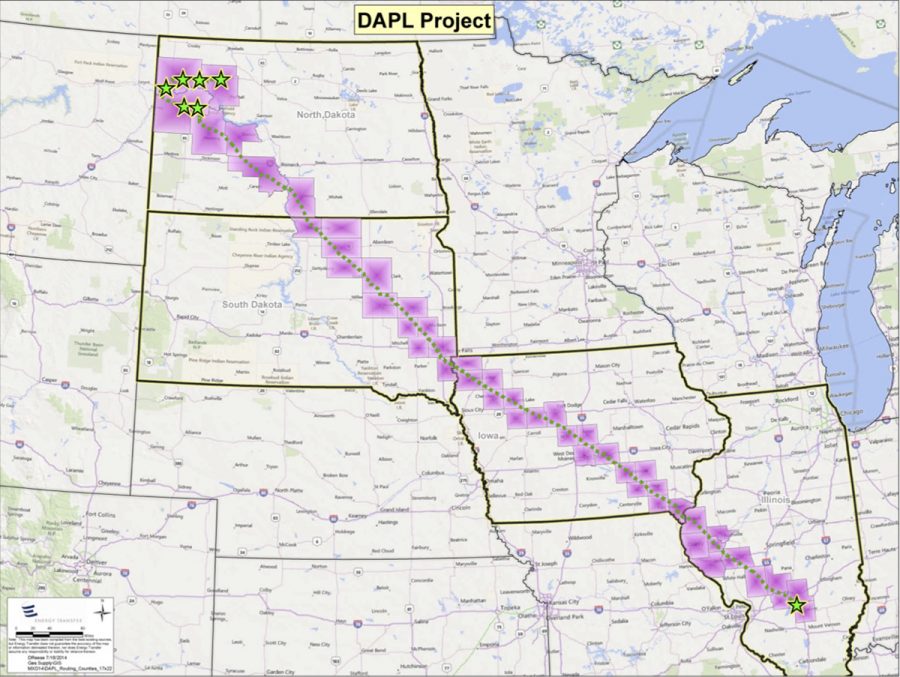 The map above taken from the Dakota Access Pipeline website shows the length of the proposed pipeline stretching from North Dakota down into Illinois.

Filling up at the gas station is part of most people’s weekly routine. It has become so habitual that not much thought goes into grabbing the nozzle and selecting a fuel grade.

It isn’t often that I find myself thinking about where my fuel comes from every time I pull up to the pump — at least until now that is.

According to the Dakota Access Pipeline website, the pipeline will allow domestically produced crude oil from North Dakota to reach major refining markets in a more direct, cost-effective, safer and environmentally responsible manner.

Safer? Environmentally responsible? The pipeline in North Dakota will be built underneath a portion of the Missouri River where the Standing Rock Sioux Native American Nation gets its water supply. Building a pipeline of such an immense size, carrying thousands of gallons of crude oil each day underneath a water source is never safe, especially, with oil pipelines’ track records.

That report isn’t based on rare cases or fluke events, that is the average amount of pipeline incidents that have occurred within the last three years and they still think it is a good idea to build another. Astonishing.

Just a few days ago, at approximately 3 a.m. Friday, Oct. 21, a Sunoco pipeline ruptured due to flash floods in Lycoming County in northern Pennsylvania spilling 55,000 gallons of gasoline into a tributary of Loyalsock creek.

According to an article on State Impact’s website, many area towns had to shut off or alter their drinking water sources and were encouraged to conserve water. This is another case of a poor choice in oil pipeline location.

Not only are dangers high for the pipeline to rupture and proximity to a community risky, but the Native American tribe is also concerned about the impacts on tribal burial sites and other cultural artifacts.

Savannah Rigert, a senior studying American Indian studies and social work, is the president of the UW-Eau Claire Inter-Tribal Student Council and is Yakama Native American. She said the project will, and is currently, bringing ecological destruction to the Standing Rock Sioux Nation.

“This pipeline will cause more harm than good,” Rigert said. “There are sacred sites throughout the route of the pipeline, burial grounds and cultural sites, that are being plowed and bulldozed, being completely disregarded.”

Rigert also said that the protesters are doing anything they can to “peacefully protect the water, the life of the earth and the land.” The Inter-Tribal Student Council will be selling t-shirts in Davies November 14 with proceeds going towards supplies for the Standing Sioux Nation.

Several Native American tribes from all around the nation are coming to aid the Standing Rock Sioux Nation and protest the construction, along with many other citizens and public figures.

One of the public figures that made a large impact was Bernie Sanders. He had the right idea when he spoke up against the project at a rally back in September, addressing the Native Americans who will be impacted by the results.

“Today we stand united in saying stop the pipeline, respect Native American rights and let us move forward to transform our energy system away from fossil fuels,” Sanders said.

Not only is this pipeline controversial in its immediate impacts after construction, but also how it will effect our environment in the future. Creating another source of oil is drawing from our finite natural resources. Because it will be underneath a major river channel, if the pipeline does rupture the environmental detriment will be catastrophic to aquatic and land ecosystems.

The groups pushing construction of the pipeline do not seem to care about the many negative impacts it will have, and is already having, on not just the surrounding people but the nation as a whole.

The Native American treaty lands should be treated with respect and we can not continue to disregard their beliefs and opinions. It is time for the country to stop doing whatever it pleases to the environment with a blatant disregards for how it impacts the land and those who inhabit it.