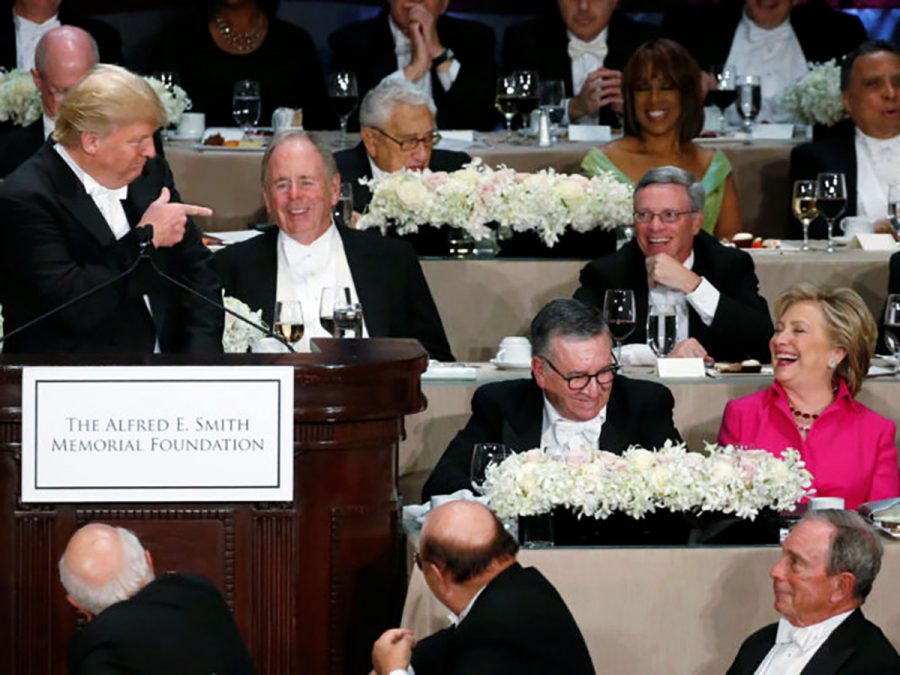 Hillary Clinton laughs at Donald Trump’s jokes about her at the Alfred E. Smith Dinner

Last week presidential candidates Hillary Clinton and Donald Trump took some not-so-subtle digs at each other and, for once, in an appropriate setting. It may not have had a significant effect upon Clinton’s campaign, however Trump’s suffered in an already precarious state.

The dinner typically involves both presidential candidates poking fun at each other in a light-hearted manner. But, similar to the entire election season, things didn’t really go as planned.

Initially, Trump’s jokes were light-hearted and he excelled in the beginning of his speech. The jab he made towards his wife was a hit.

“Michelle Obama gives a speech, and everyone loves it,” Trump said. “My wife, Melania, gives the exact same speech and people got on her case.”

His humor was well received by the crowd until, in typical Trump fashion, his speech turned into a string of insults with no facts to back them up.

He claimed Clinton was kicked off the Watergate commission, which according to The Washington Post, is not even true. The crowd responded with boos rather than laughs.

Trump has a history of making false claims. According to Politifact.com, a political website that has been analyzing the truthfulness of the candidates, only 4 percent of his claims have been completely true and another 25 percent have been partially true.

The room seemingly lost interest in Trump’s “jokes” near the end of his speech.

Clinton opened her roast-session by joking about taking a break from her “rigorous nap schedule” in order to attend. She also had her share of audience dissatisfaction.

“You know, Donald Trump really is as healthy as a horse,” Clinton said. “You know, the one Vladimir Putin rides around on.”

The joke was met with applause as well as some booing from the audience.

The presidential candidates are no strangers to butting heads, but continuously, one of them takes it too far. In the case of the Al Smith Dinner, they had their turns to speak and both said comments that should have been omitted in order for the night to be less of a face-off between the candidates.

This is similar to the debates in which each of them would have time to speak and one of them (usually Trump) would interrupt the other with something inappropriate or potentially untrue. In the first debate alone, Trump interrupted Clinton 55 times, according to Time.com.

Clinton and Trump also have a history of making rude comments towards each other, just as they did during the dinner.

For instance, Clinton tweeted “Delete your account” at Donald Trump when he tweeted “Obama just endorsed Crooked Hillary. He wants four more years of Obama — but no one else does!”

And who could forget Trump’s interjection during the third debate when he called Clinton a “nasty woman”?

Prior to the dinner, The New York Times reported that Trump had an 8 percent chance of winning, which dropped a percent the day after the event. Frankly, he could’ve said nearly anything at the dinner and it wouldn’t have made the public feel any better about him.

Clinton remains with a 92 percent chance of winning the election, according to the same poll.

In order to avoid future incidents of clashing in an inappropriate setting, maybe the candidates could take Clinton’s advice during her speech: “Let’s come together, remember what unites us, and just rip on Ted Cruz.”