It’s time to talk about racism

'UWEC is racist' calls for discussion from university administration 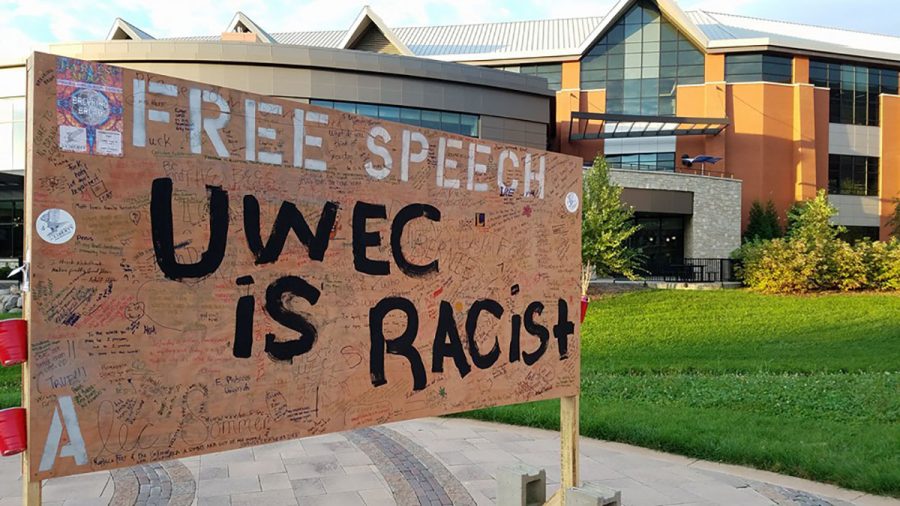 University officials have been under fire this past week after free speech boards were removed from the campus mall following the discovery that “UWEC is racist” was written across one board in bold, black paint.

Kab Vwj, a senior at UW-Eau Claire studying organization of communication, discovered the writing on the board early in the morning around 7 a.m. and snapped a photo.

By 10 a.m. the board was cleared from the campus mall, along with any signs of the university’s dirty laundry.

Upon discovering the prompt removal of the board, Kab Vwj turned to her blog, posting an article entitled: “Dicks out for Harambe” is free speech, “UWEC is RACIST” is not: a story of saving face.” Vwj’s blogpost quickly received attention as it was shared all over Facebook, students expressing their own opinions on the boards removal.

Her post shined a light on the boards message even after it had been removed from the campus mall, igniting a conversation that had originally been stifled.

The Free Speech boards, which were put up by the student organization Young Americans for Liberty (YAL), were scheduled to be up from 10 a.m. to 1 p.m. Friday, Sept. 23 to celebrate constitution day.

President of YAL, Brad Hanson, had never had any issues before the incident, putting them up earlier Wednesday and leaving them over the weekend.

“Last year I think I left it up over the weekend and then on Monday I think it was the dean of students that messaged me saying, ‘Hey, constitution week is over, could you remove those?’ and I did no problem,” Hanson said. “Then this year, you know, I kind of assumed it wouldn’t be a big deal to leave them up, I mean students like to look at them.”

This year was a different story.

Hanson said that morning someone emailed him telling him to “get those boards out of here” because there was racist remarks on them, while also receiving another email informing him he was no longer allowed to have the boards up.

Following the heat over the removal, the university’s Facebook page released a statement on Monday stating the Free Speech boards on the campus mall were supposed to be removed after Friday’s events on the mall.

The university’s Facebook page said: “The signs were taken away as they were scheduled to be removed and the messages on the signs had no bearing on their removal.”

While taking the board down may not have been a direct cause, it sure looked that way.

A broken springboard for discussion

The university has continued to insist the boards removal was not based on the fact “UWEC is racist” was written across it. However, it’s failed to address the key issue at hand: is UW-Eau Claire racist? And what type of environment is UWEC creating for people of color?

“Taking it down is erasing student voices. Taking it down is brushing things under the rug and pretending everything is okay,” Vwj said. “(The university) is shutting down a lot of conversation that can be had about the issue of race and racism, especially on an institutional level when it comes to UWEC in general.”

By removing the boards, the university missed an opportunity to foster discussion among students about institutional racism and racism in general.

And that discussion is long overdue.

Johnathan Buchholz, a commenter on Vwj’s blogpost, said  “I would actually like to know what makes UWEC so racist. Enlighten me. Does every non-white race feel oppressed and that uncomfortable here?”

Even one person of color on this campus who feels oppressed or uncomfortable is cause for concern. However, the 2015 Campus Climate Survey indicates it’s a significant percentage of students of color that experience issues on our campus.

According to the Campus Climate Survey, 67 percent of students of color reported experiencing at least one bias incident while at UW-Eau Claire. That is nearly seven out of 10 students of color who had the horrible experience of being treated differently because of their race. This is no small number of individuals when it comes to matters of racial bias.

But, it’s not just issues of bias. Many students consider leaving all together.

When it comes to students who contemplate leaving the university, 45 percent of students of color seriously considering leaving (compared to 29 percent of whites).

The two marginalized identities with the highest percentage of students considering leaving the university were Black/African Americans with 61.5 percent and trans, non-binary students reporting 71.4 percent.

While many in the comment section of Vwj’s blogpost argued the issue has been blown out of proportion, it is important to remember the numbers do not lie.

There are students on this campus being treated differently and experiencing things everyday that many other students cannot even imagine.

Vwj said the responses proclaiming she was too angry or that this was not a “big deal” are dismissive of the true problem.

“This idea that I can’t be angry about it and I have to say it in a very cool, collective way is very dismissive and very invalidating when it comes to the experiences of people of color,” Vwj said.

The university cannot expect students, like Vwj, to approach matters of institutional racism with a cool composure when it impacts their day to day lives. It’s clear from the Campus

Climate Survey statistics that this campus has discrepancies when it comes to dealing with issues of race.

You simply need to look at the response the institution gives to issues of racism, Vwj said, to gauge how racist an institution is. When it comes to this university, there has been little to no talk about race or racism.

Even after multiple meetings with campus administration in regards to the issue affecting marginalized identities, Vwj said the university often dismisses the issue with an apology and sends them on their way.

“That’s great if you’re sorry, but if you’re really really sorry you’d change something about it,” Vwj said.

While discussing issues of racism on a personal level and institutional level is never an easy conversation. The university is failing its own students in not standing up and saying, here are the issues and here’s how we’re going to go change things to better all students experiences on our campus.

Where do we go from here

This is not the first time students have called out the university for being racist, nor is it likely the last.

While the bedsheets were removed, similar to the Free Speech boards, there is one thing to be learned from these experiences: taking away public commentary on the problem does not in turn make the problem disappear.

In the university’s liberal education learning outcomes it states students are required to display critical thinking and the understanding of cultural diversity, Vwj said. However, even by looking at the comments on her blog, it became incredibly clear some students still do not even have an understanding of what racism is.

“A lot of people were like ‘Oh yeah, you can be racist against white people’,” Vwj said, “but systematically and institutionally you cannot and for students to leave this university — people who are graduating in December still do not have this understanding or grasping of what institutional racism is.”

The solution? Vwj believes training and educating the figures on this campus that interact with students every day: faculty and staff.

Improving the faculty and staff’s understanding of what constitutes institutional racism or racism in general, will in turn reach down to the students.

“The biggest question is if students of color or the safety of marginalized identities on this campus was a priority for the university, it would already be done,” Vwj said. “They can make up excuses like budget cuts, but would scrape up the money if they could. They choose not to.”

It’s time the university quits talking about being a more inclusive campus and starts doing something. If a small amount of money was scrapped up to spend on educating students and faculty on the issue of racism, it would be money well spent.

Students are trying to send a message to you, UW-Eau Claire, are you listening?

We must implement mandatory training to faculty on the issues of race and racism. Campus can no longer afford to stand idly by. The longer we wait to start making a change and putting plans into action, the more students will be negatively affected.

If not mandatory training, then the university needs to make a clear statement about the role it plays in institutional racism. By not educating students and by ignoring the issue, it leaves the conversation in the hands of the students to figure out for themselves.

Students shouldn’t be arguing in the comment section of blog and Facebook posts, trying to educate each other on what institutional racism means. The university should be teaching the students.

The road to excellence is not always convenient, pretty or comfortable but in the end it leads to a place that is better for everyone.

It’s time the university begins down that path, again.

“The only reason I criticize the university so much is because I care about this university and I want it to change, that’s probably the biggest thing,” Vwj said, in regard to why she so often speaks out against institutionalized racism on our campus. “And it’s something very hard to admit.”

Many of the students at this university care and want to make the university a better place. A place all students can be proud of, despite their race, gender or sexuality. The question is, UW-Eau Claire, do you care?