An open letter to The Odyssey Online 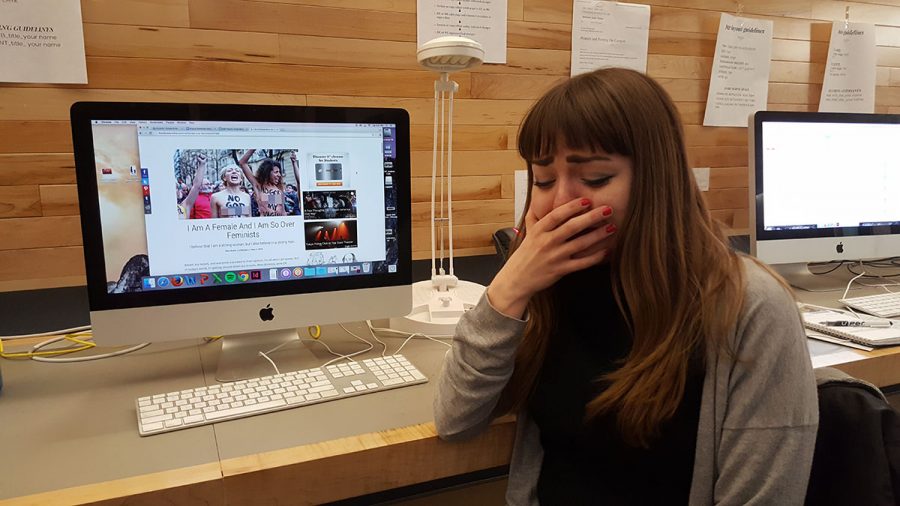 Currents Editor Sami West laments the state of journalism as she reads The Odyssey in The Spectator office.

Dear The Odyssey Online… Just kidding, scratch that. I’m not going to write another one of those open letters.
Why? Because I don’t like them. Because they’re unoriginal, pointless, just like almost every piece of “content” The Odyssey Online produces.

Whenever I’m on Facebook, it’s pretty typical for me to come across at least a few Odyssey articles some of my friends share on their timelines. Some of them even write for The Odyssey Online and frequently share their work.

But a few days ago, on the very same day, I found two articles to be particularly disturbing: “Things Trump Supporters are Tired of Hearing,” and “I Am A Female And I Am So Over Feminists.”

If those titles don’t immediately make you cringe, chances are, you’re probably as misinformed and privileged as those writers from The Odyssey Online are.

But before I talk about these entries specifically, I first ask for two things.

One, I recommend Odyssey writers themselves make sure they understand sometimes difficult-to-understand topics like politics before they write about them, and same goes for anyone considering whether they should share that controversial Odyssey article.

It’s a cycle of deception, and it needs to stop.

Two, I recommend everyone understand what The Odyssey actually is before treating it like some credible, relevant source for information or even guidance to opinions on these topics.

The Odyssey Online describes itself as a “social content platform that discovers and shares a chorus of millennial voices,” according to their website. This chorus of voices is shared, they say, through the sharing of the content on varying social medias.

Many college campuses have their own offshoots of the larger Odyssey website, including one at UW-Eau Claire.

Throughout both of these pieces, it became clear neither of the writers are aware of what exactly it means to be racist or to consider yourself a feminist.

Feminism is defined as the advocacy of women’s rights in regard to social, political and economic equality to men. Nowhere in that definition (or any other definition) will you find the statement “Women are superior to men.”

To say feminists should “relax” when full equality still has not been achieved is ridiculous. Women’s rights have come a long way in the past century, but that doesn’t mean they should stop now. You don’t stop when you’re half way up a hill just because you’ve already “come a long way.”

My largest issue with The Odyssey is that many people don’t see it for what it is — it’s a big blog written by many different writers.

It’s a hub for blog writing — not journalism. Journalism is not taking your life and opinions and stating them without any outside evidence or interaction with others.

These writers don’t cite any sources for factual evidence. Should these really be considered “articles” if they included zero outside research to back up their opinions? No.

If journalism is really dead, is this glorified blog what we’re doomed to be surrounded by in the future? I hope not.

I hope writing never becomes simply huge blogs where everyone states their misinformed opinions under the pretense that “everyone has opinions, and this is mine.”

Fellow millenials, I promise you, not all our thoughts are gems, and truthfully, most do not need to be shared. I urge you to think that through before you write a misinformed listicle or a personal open letter that probably no one cares about, and many people don’t actually relate to.

Save your open letter or your general mislead thoughts and stories for your journal or diary, both of which are effective ways to share your thoughts in the appropriate environment — for yourself.

And if you wish to write and get your voice out there, I urge you to join a real student news source like The Spectator. Become a student journalist, not a student blogger. You’re better than that.