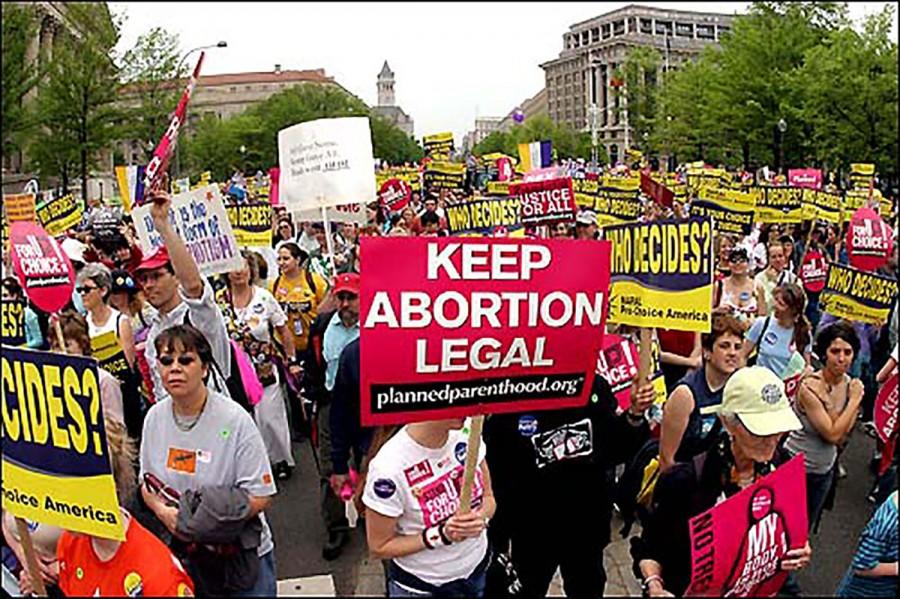 A group of pro-choice protesters gather in Madison to advocate for reproductive rights.

If I had a baby right now, my life would be ruined. My education would get put on the backburner. I would probably end up back home in the bland suburbs of Chicago with my secretly resentful parents, changing diapers and losing sleep as I dream of what could have been.

Thankfully, I have the power to choose when and if I want to have a baby. A positive pregnancy test is not a signed contract forcing me into motherhood.

At least for now.

With the recent controversy surrounding Planned Parenthood and Donald Trump’s statement that women who have abortions should be punished, it is no secret reproductive rights are facing trying times.

It appears some Republicans will do whatever it takes to restrict a woman’s right to her body. Why do these rich men care so much about what I, a broke 19-year-old college student, do with my body? If I don’t want to drop out of college to raise a child, isn’t that my choice to make? Apparently not.

Although two federal courts have declared this law unconstitutional, Schimel is under the impression that this nonsensical law will ultimately protect the wellbeing of women.

The pro-life group Wisconsin Family Action lobbied for the law, claiming that requiring abortion providers admit patients into a nearby hospital should an emergency occur, is just another precaution that will protect women’s health, according to WUWM.

“The intent of this law is to put obstacles in the path of women seeking safe, legal abortions care in Wisconsin,” Barnes said to WUWM.

As someone on the far left of the political spectrum, I wholeheartedly agree with Barnes.

This law makes little sense to me and the intent is abundantly clear. Republicans like Brad Schimel will continue to create obstacles until woman’s right to choice is completely restricted by law.

WUWM said Wisconsin Family Action argues the law will protect women in case of an emergency during the abortion procedure, but how many of those instances are there in reality?

According to an article from the Huffington Post, abortion-related injury or death is extremely rare and almost nonexistent. In the entire year of 2010, only 10 American women died from complications related to abortions.

Prior to the passing of Roe v. Wade in 1972, women were resorting to grotesque and drastic measures in order to receive illegal abortions. The average number of deaths by abortion in America before Roe v. Wade was approximately 700 per year, but the actual number is estimated to be much higher.

These statistics make it clear to me that access to safe and legal abortions has saved women’s lives. If Republicans are so concerned with women’s safety, why are they trying so hard to push us back into a time when abortions were always illegal and likely fatal?

Republican pro-life legislature, like the law Schimel is attempting to review, serves only as an obstacle to women’s safety and well-being. Please, Brad Schimel, mind your own business and let me be the one to control my body.