The continual struggle of trying to get it together

Every semester I try to become some sort of time-management queen, and every semester, I fail 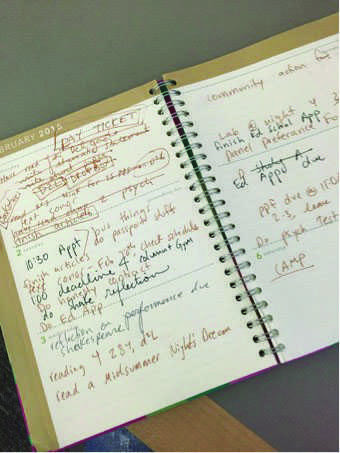 Hultman’s planner contains her assignments, appointments and to-do lists for the week.

Albert Einstein is quoted as saying insanity is “doing the same thing over and over again and expecting different results.”

If that is what it means to be insane, then I must be certifiable.

Every semester I decide I’m going to get it together. I think I will somehow become the type of person who wakes up early and has every hour of the day scheduled with fulfilling and worthwhile activities.

I spend the first week on top of all my assignments; I develop some fabulous new organizational system and I balance my days with a healthy mix of exercise, adventure and schoolwork.

However, after about two weeks to a month, things start to fall apart. I drop the exercise, buy a pint of ice cream and forget to hand in the essay that was due last Tuesday.

It’s not something that started in college, either. It’s been a biannual struggle since middle school: The horrible time when innocent children are suddenly expected to fend for themselves in the cold, cruel world of academia.

At this point, no one expects me to abruptly become organized and motivated except myself and maybe my dog, because he is a sentient being who has absolute faith in my abilities.

The first two weeks of this semester happened slightly different. Last Tuesday I spent nearly two hours trying to put all of my assignments from every class onto a single spreadsheet. I got less than one half of one class onto the spreadsheet until I decided it wasn’t worth it.

I have an unpaid parking ticket from over winter break, and whenever I try to enter my license number online to pay for it, it says my car isn’t in the system. Instead of calling a real person and asking what is going on, I’m hoping that somehow they put the wrong license number in and won’t be able to find me or charge the extra $40 I’ve racked up.

The Center for International Education extended the deadline by which I was supposed to apply for a passport for my study abroad program next fall. I was originally supposed to apply around Thanksgiving, but they told me I could do it over break. It still hasn’t happened. Who knows how I’m going to get to Spain.

The one thing I’ve got going for me is my newfound planner usage. I didn’t learn how to effectively use a planner until last semester. I spent my entire freshman year of college without one.

From middle school onward, I would write assignments in my planner for the first week or so of the year, and then the poor thing would be left behind somewhere to gather dust. If it was lucky, it was folded awkwardly into the the bottom of my backpack, where it would remain for the entirety of the school year.

This semester, though, I am actually going to change. I don’t care if Einstein himself raises from the dead and calls me insane for continuing to fight for that well-ordered life, because this semester is the semester it actually happens.

By this time next week I will be a new person, just wait and see. This semester is going to be the semester I finally get it together. I can feel it.