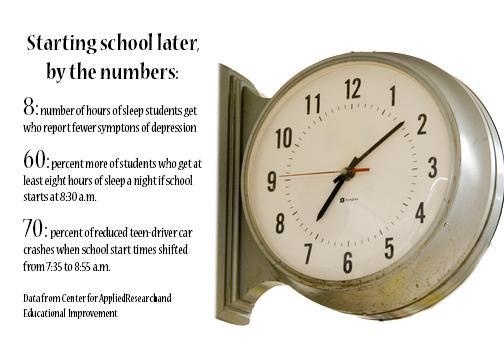 Graphic by Alex Zank, The Spectator

Sometimes the most controversial topics involve how late we should be allowed to sleep in. The battle over teenage slumber, in particular, has been a public policy battle nearly 20 years in the making.

A recent New York Times article reported the movement to push back high school start times, which advocates claim would be more in line with teens’ biological sleep schedules, has gained momentum. Dozens of school districts across the country have pointed to growing research on the topic and delayed school start times in the interest of student health.

The idea of starting schools later even scored an endorsement from Arne Duncan, secretary of education, last summer via Twitter.

The pros and cons of both sides are obvious. Some places that employ students don’t close until 11 p.m. or later, resulting in late nights for teens.

Other places close much earlier, such as 7 or 8 p.m., and later school hours affect students’ availability. The Editorial Board has experiences with both cases.

It’s important to let teens, at an important stage of development, to get adequate sleep. At the same time, generations of students have been dealing with school starting times in the early morning and have survived.

Another thing to point out is the basis for making such a decision. For schools, academics should come first. Sports or other extracurriculars shouldn’t be the determining factor for school districts in making these decisions.

In the end, the Editorial Board was split on the decision. The question posed was: “Is it a good idea to start high school at a later time?”