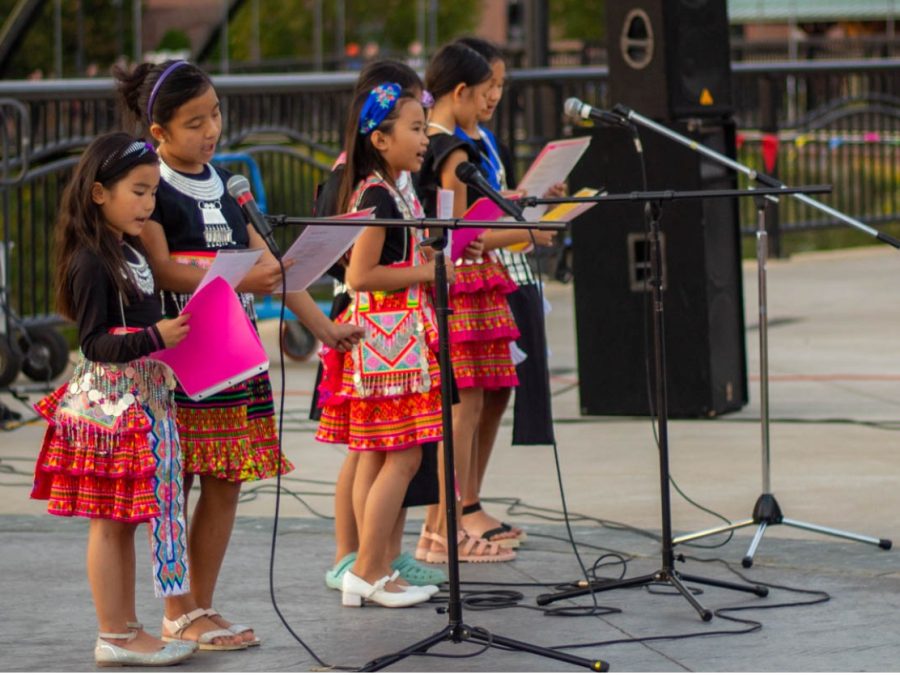 The market featured performers, such as this group of children who sang traditional Hmong songs.

The event, hosted in conjunction with the Hmong Economic Advancement, Research, and Equity conference occurring in the nearby Pablo Center, lasted from 11a.m. to 8:30 p.m. and featured a variety of both vendors and performers.

There were also performances, including acts by children singing traditional songs and passersby had the opportunity to learn a line dance.

One vendor at the event was Sean Vang, who was selling plushies and toddler tee shirts.

Vang’s plushies feature designs he has drawn and printed overseas, which he then sews and finishes himself. Of these designs, Vang’s personal favorite is a frog, based upon his own favorite animal.

He was drawn to sell these at the market by an acquaintance from a previous event.

“They recommended we come here because they said that our items would sell well, so we were like ‘okay, let’s give it a shot,’” he said.

Vang’s designs can be found at drawnbyseanshop.com or on Instagram at @drawnbyseanv.

Another booth at the market featured MJ Wong Engel, Deputy Coalitions Director for the Democratic Party of Wisconsin, who represented the party’s Asian American Coalition. This group served as one of the sponsors for the HERE conference.

“We’re out here because this is the Wisconsin we want to see, a Wisconsin that celebrates our diverse cultures and communities,” she said, “and as Asian American myself, it’s just really awesome. To be a part of this event, the conference, and all that HALED is doing to ignite Hmong entrepreneurship.”

Among the Little Mekong Night Market’s organizers was Addison Vang, who served as a co-chair for the market. Vang explained the event directly stemmed from the ideas in the HERE conference, which focused on Hmong entrepreneurship.

The conference explored start ups and resources and provided an opportunity for networking. Guests included speakers from the state level who came to explain government support systems, according to Vang.

“There really isn’t a space for that right now.”  Vang said. “They operate within their own little silos and outside of government help, so this conference was a way to bring all of that together.”

In turn, Vang stated, the night market arose as a way to promote small-scale entrepreneurs. While the event was not limited to just Hmong vendors, most or all were, and the market aimed to allow a space for Hmong vendors to showcase their products. Attendee-wise, however, the event catered to the general community.

“We wanted to really provide an event that wasn’t for just Hmong,” Vang said. “It was for families, it was for people who wanted to come together, to be a part of something fun. When it comes to inclusivity, look around — there’s so many different people.”

Vang provided insight into the name of the market, explaining the symbolism and significance of the Mekong River to the Hmong people. He likened the river to the Mississippi, emphasizing its size; historically, the Mekong was a treacherous obstacle for Hmong people that had to be crossed to escape oppression.

“The Mekong represents a lot: it’s dangerous, but it also represents life and freedom,” Vang said.

As such, it has become a representation of the struggles of Hmong people and their challenges and successes, such as immigration or entrepreneurship. On top of this significant cultural implication, however, Vang added that the geography of Eau Claire was particularly fitting.

“Luckily we have two rivers here, which is great, so it kind of worked out,” Vang said.

Flake can be reached at [email protected]