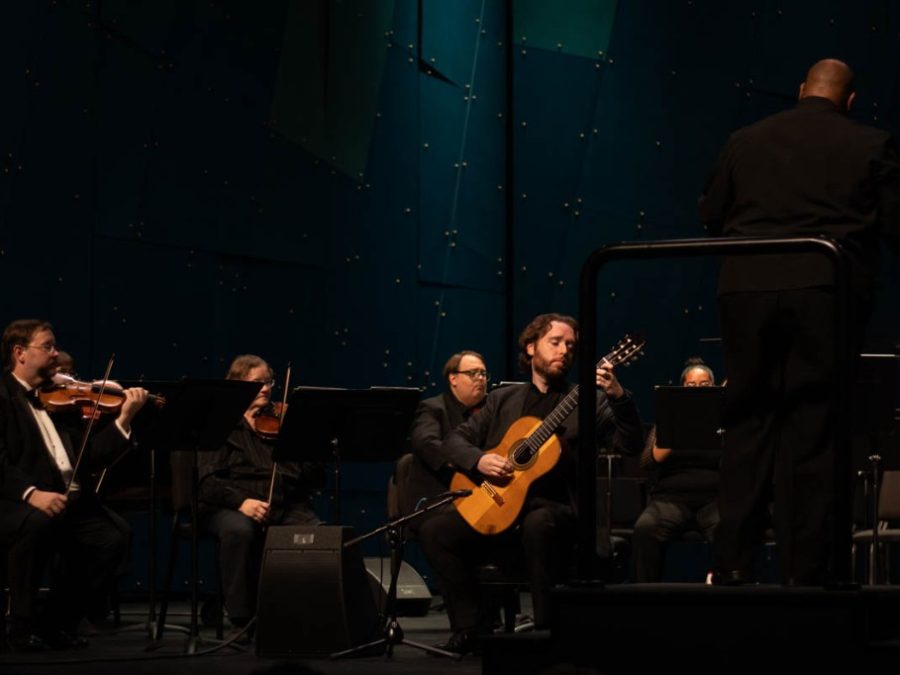 Over the course of an hour, the ensemble performed “Concierto Del Sur” by Manuel Ponce, “Symphony No.2 ‘Sinfonia India’”  by Carlos Chavez, “Estancia” by Alberto Ginastera and “Danzon No. 2” by Arturo Marquez.

According to Davin, this is his first performance at the Pablo Center with ECCO.

Davin said his career in guitar began early at the age of 7 with lessons– he studied classical guitar due to an interview his father read suggesting it was foundational to other types of music.

“While I can say that’s somewhat true from my own dabblings in folk, jazz and rock, it’s the classical style that really stuck for me,” Davin said.

Davin explained that his musical pursuit later continued in earnest during his time studying in the prep department at the Cleveland Institute of Music, at the University of Southern California and when he earned a master’s degree at Juilliard.

Since then, Davin’s career in guitar has spanned the globe, taking him to a wide range of places. He has performed on “The Late Show with David Letterman,” at the Metropolitan Museum of Art and the Aspen Music Festival, and even at Carnegie Hall according to his biography on his website.

Davin has also spent time teaching guitar at the Cleveland Institute of Music and the Shenandoah Conservatory.

Among these experiences, however, he recalls that a particularly impactful time was when he spent teaching at the Afghanistan National Institute of Music over a few visits between 2013-2016.

During this time, Davin explained, he had an exchange with a Muslim student who asked if one couldn’t be Muslim in America.

“The extremity of that impression showed me how far we have to come in learning about each other and seeking common understanding. I’m grateful to have had the opportunity to build that understanding, even on a seemingly small scale, through the connection we’d made in music,” Davin said.

As a musician, Davin states that he takes inspiration from a wide range of sources, including nature, which he explained provides “endless wells of creative energy and clarity,” and sociological structures, all of which influence his playing and concert planning.

“As a performer, I’m always looking to create musical experiences that satisfy the heart and the mind,” Davin said. “So I put a lot of thought into the stories behind the music, how pieces within a concert connect to each other, and how an audience might come to see something about life a little differently by the end of a concert.”

In terms of his own music consumption, he also cites that favorite artists include Sergey Malov, Laura Mvula, Natalia Lafourcade, Lisa Hannigan, Elton John and Prince.

The highlight of the concert for Davin came in the form of “Concierto Del Sur,” a song which he has never performed before “Scenes from Latin America.”

“It’s a super exciting, interesting and all-too-rarely-played piece that captures the spirit of southern Spain (as requested by its dedicatee, the great Andrés Segovia), but also sounds from the composer’s native Mexico, and from the conservatory styles of early 20th century Europe, with a strong influence of the French impressionists in his harmonic language,” Davin said.

Davin’s accompaniment with the orchestra was well received, and multiple members of the ensemble praised his musicianship after the performance concluded.

“It was amazing. Just his virtuosity, and so many notes out of one hand,” ECCO member Susan Halderman said.

Davin’s experience with ECCO was also appreciated interpersonally — cello player Dean Langby explained that he was an easy musician to work with.

“He was a very kind and accommodating person. I particularly liked that he spent time making sure things worked out with various players. If things didn’t work out and we ran out of time in the rehearsal, he worked on that after the rehearsal was done. It’s rare for performing artists to do that,” Langby said.

Flake can be reached at [email protected]