From Carmen Sandiego, a carrot, the Monopoly Man and a can of Arizona tea, UWEC students celebrated Halloween in a variety of ways 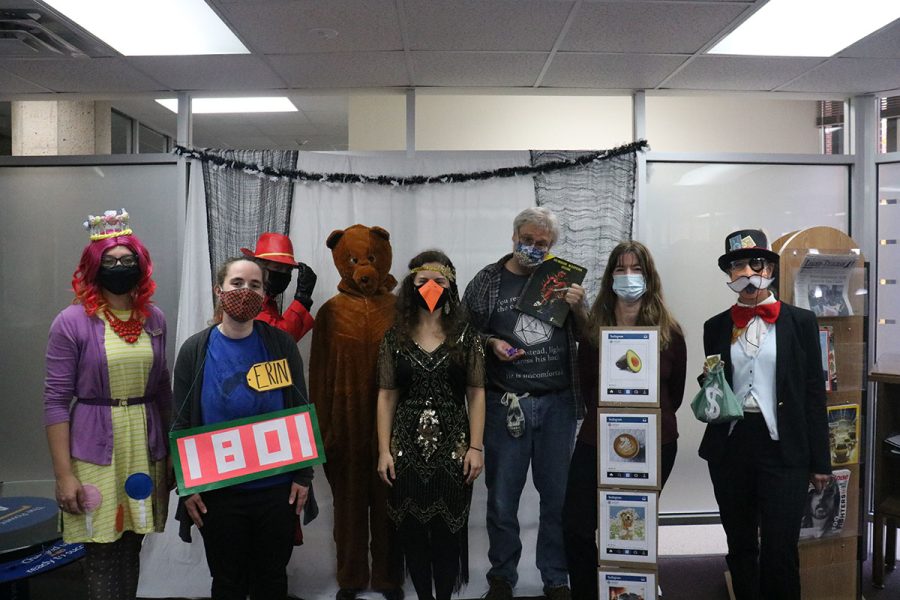 After a two year hiatus, the library halloween costume contest has returned. This was the fourth annual iteration of the library tradition.

This year had over 25 entries into the contest. This is the largest number of entries the competition has had, Jenna Vande Zande, a library staff member who ran the event, said. She also said that next year they are going to need more space to present all the costume entries.

“We are really into Halloween costumes here, so everyone in McIntyre dresses up every year, and that is how we started the contest,” Vande Zande said.

Participants showed up throughout Friday from 9 a.m. to 2 p.m. to present their costumes and get their pictures taken. They were then given a small, 3D printed “participation ghost” for entering.

The costumes this year included Carmen Sandiego, a carrot, the Monopoly Man, a can of Arizona tea and many more. Even the university mascot, Blu the Blugold, made an appearance to enter the competition dressed up as a supreme court justice.

This year there were two categories that contestants competed for: the best costume and the most creative costume.

The winners of each category will be awarded with 3D printed trophies that were created in the makerspace; the medal for best costume is an undead hand grabbing a pumpkin, and a smiling octopus statue was given to the winner of most creative costume.

Anyone entering or exiting the library could cast their vote by putting a hash mark on a category on the costume’s display sheet. People could vote on as many costumes as they wanted. The last day of voting was Monday, Nov. 1 ending at noon.

The winner of the most creative costume was Kate Hinnant, a librarian, dressing up as A White Woman’s Instagram. This was a one piece costume. The costume was a necklace with a long line of clipboards displaying different instagram posts including an avocado, coffee and a dog.

“My son introduced me to Bo Burnham’s song, “White Woman’s Instagram,” and the song goes through my head all the time,” Hinnant said. “I like to do conceptual costumes, so I thought, ‘Why not be a song?’”

The winner of the best costume was Parker Kolash, a student, with a Ghostbusters costume. The costume included a jumpsuit, boots, many different tools and keys, a headset and a Proton Pack, complete with working lights and sound effects.

“I love Ghostbusters, and because Ghostbusters Afterlife was coming out last year, I thought it would be a great idea to start putting the costume together,” Kolash said. “When I was six years old I was a ghostbuster for Halloween, so I am making my six year old self proud.”

To see pictures of this year’s costume-clad contestants and the winning costumes, check out McIntyre Library’s instagram page. You can also check out pictures of the participation ghosts and trophies on instagram as well.