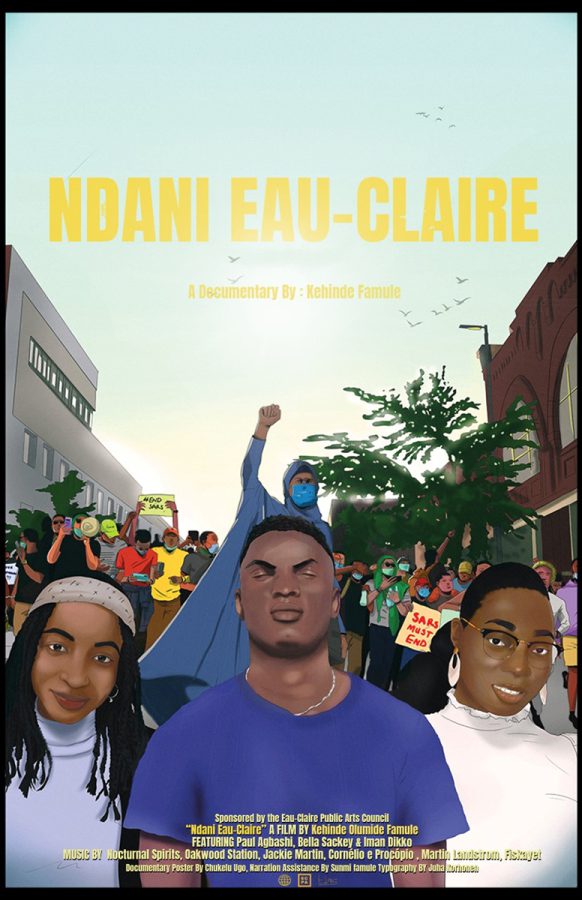 A documentary that follows the experiences of three African American students at UW-Eau Claire will be making its debut in November.

Famule said “Ndani Eau-Claire” was created for the African Student Association and follows three students through the challenges of school. He said he wants viewers to see the stories and perspectives of the individuals within ASA.

The word “ndani” means “inside” in Swahili, in conjunction with Eau Claire, creating “Inside Eau-Claire,” Famule said.

“I chose the word ‘Ndani’ to represent the duality of being African and existing in a new space,” Famule said. “The word was meant to stand out and procure questions similar to being Black in Eau Claire.”

Having always viewed his life in chapters, Famule said experiencing the nuances and complexities in Eau Claire — coupled with the chaos of 2020 — he felt compelled to capture and archive this unique time and tell a story others can connect with.

Dang Yang, director of the Office of Multicultural Affairs, said it’s wonderful to hear about the things UW-Eau Claire alumni are doing in the community.

Famule said one of his goals for this documentary is to raise money for OMA to help make the college experience of prospective students a more positive one. He also said he wants this film to be a gift to ASA.

The documentary will be premiering at 2:30 p.m. Nov. 6 at the Micon Budget Cinema in downtown Eau Claire. Tickets are available to purchase online or at the door. Famule said all proceeds will be donated to OMA.

He said OMA is where he met so many people who have changed his life for the better.

“As a student who was shaped by my experiences in OMA and Blugold Beginnings, I want to reciprocate the support and love they have shown me,” Famule said.

He said he received help and guidance from a variety of individuals throughout the process of filmmaking. Famule said he was given feedback and connections with other storytellers in addition to the assistance he received while shooting.

“I think Olu’s accomplishments will spark discussions, as well as facilitate learning, if we are open enough to look at this as an opportunity to do so,” Yang said. “I’m so proud of Olu and I can’t wait to see his film.”

In the future, Famule said he strives to do freelance photography and video projects while making an impact in the community through things like workshops, fundraisers and outreach programs. He said he also sees himself traveling back to Nigeria and doing film work between there and the United States.

“I want this body of work to be something they feel proud of,” Famule said of ASA. “Something which they can relate to and gain inspiration from to continue expressing the beauty, love and stories of their identity.”

A trailer to Famule’s “Ndani Eau-Claire” can be found here.