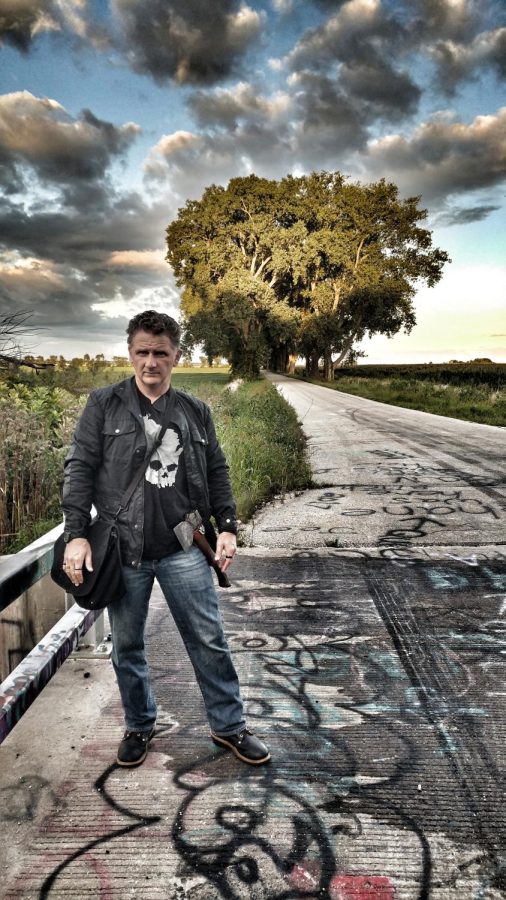 “Most people showing up for a lecture aren’t die-hard believers,” Lewis said. “They’re just curious and want the footnotes, and that is okay.”

For over 20 years, local paranormal investigator, author and lecturer Chad Lewis has been studying the strange and unusual, as he labels it, across the world and right here in Eau Claire.

Lewis, an Eau Claire native, describes his research as everything from UFO’s and crop circles to creatures like Bigfoot and vampires, to ghosts, hauntings and other bizarre history.

Growing up, Lewis was fascinated by the idea of the paranormal, he said.  Growing up not too far from Elmwood, WI, which labels itself as the UFO Capital of Wisconsin, was one of his first inspirations.

After graduation, Lewis attended UW-Stout to study psychology, eventually getting a master’s degree. His master’s thesis, he said, was about beliefs around the paranormal: why do some students believe in the supernatural and paranormal and others don’t?

Since then, Lewis has traveled around the country researching reported supernatural locations and tours around the Midwest to give lectures on his findings. For the last 15 to 18 years, he said, he’s been able to do it full-time.  Pre-COVID-19, Lewis said, he would do 200 programs a year.

When he does his research, Lewis said that he approaches the process with an open mind.

“You have to dig,” Lewis said. “I try to figure out what the legend is. I like stories that have a long history of happening, multiple witnesses that don’t know each other, and some type of origin story — or reason why this activity might happen.”

Putting in the time to investigate history can tell you a lot about the present for the strange and unusual, Lewis said.

He gave the example of an infamous cemetery in Appleton, WI, where a woman named Kate Blood is buried — legend has it if you go to her gravesite, you might see blood ooze out of the ground.  Apparently, she murdered her husband and three children and is still feeling vengeful.

“I looked into the records,” he said. “She didn’t murder her husband. In fact, he lived much, much longer than she did. Her obituary calls her a loving mother and says a ton of other nice things.”

But, Lewis said, sometimes the truth can upset people.

“I receive (attacks) from both sides,” Lewis said. “People who think it’s bullsh*t, but also from true believers that are upset when I say something didn’t really happen — like, ‘how dare I?”

“I’m much more fascinated by human belief systems and human perceptions of why we believe these things,” Lewis said. “I love the folklore. I love how the stories adapt and progress over the years.”

When it comes to the Chippewa Valley, Lewis said it’s not just his hometown bias that makes it interesting.

“The Chippewa Valley has so many different types of hauntings and activities that really just run the entire spectrum,” Lewis said.

There’s an enormous variety of stories, he said, from sea serpents in Half-Moon Lake to ghosts in the Kjer Theater on UW-Eau Claire’s campus. There was even apparently a massive black snake that used to be seen on Water Street, never captured, and not seen for years.

Stories of the strange and unusual matter because of the impact and influence they have on our culture, Lewis said.

“The stories and beliefs are all a part of those greater questions we ask,” Lewis said. “What happens when we die? Are we alone in the universe? These have plagued us since the beginning — and the strange and unusual start to explore that.”

In the end, Lewis wants to get people interested in their communities, their towns and the history behind them. All cities are pretty much the same, he said. Same hotels, businesses, restaurants; it’s the stories and histories that make them unique.

“I want people to get out there and explore,” Lewis said. “It’s that time of year, anyway. You don’t even need to leave Eau Claire to find some really cool stuff. Get out there. Explore. Have an adventure.”

For more information on Lewis, check out his website.