“Passion Pod” seeks to inspire passion and creativity in listeners 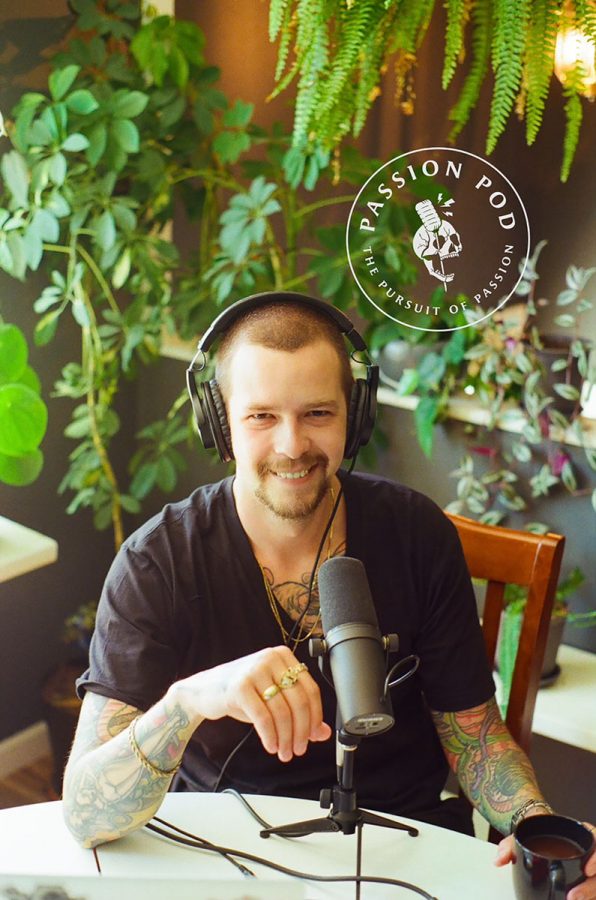 From owning the local skate hub to interviewing creatives of all kinds, Chris Johnson said he doesn’t want to be put in a box. Photo taken by Sawyer Brice

As soon as he started, Chris Johnson knew that his podcast Passion Pod was going to be big, he said.

“In the very first interview I ever did, I said that my podcast was going to change the world,” Johnson said. “And I genuinely believe that it will.”

Johnson owns Passion Board Skate Shop in downtown Eau Claire and has been running his podcast Passion Pod, which now has nearly 18 thousand followers on Instagram, since 2019.

Johnson was in Minneapolis when he appeared on a skateboarding podcast, which he said gave him the spark to think about a podcast of his own.

“I’m a very extroverted person, I love talking with people,” Johnson said. “So the idea was kind of there. I could make this thing worthwhile.”

Johnson first recorded an interview with musician Miles Blvd and said he was not necessarily planning on doing anything with it. He contacted another friend, Sarah Morse, of Eau Claire Pet Care, and did another interview.

Getting excited about the interviews he had done, Johnson said he decided to take it further. He got microphones and a recording setup and re-recorded both interviews before doing eight more — comprising the first season of Passion Pod.

“Each guest represented a different kind of industry,” Johnson said. “The whole goal was to inspire the listener to think about things they’re passionate about and help them find more ways to incorporate those into their lives.”

Sawyer Brice, a fourth-year advertising and media student, was recently on Passion Pod (season 6, episode 9), and talked about his work: directing, filmmaking, and photography.

“Chris came to the interview so prepared,” Brice said. “He asked questions that I really wasn’t expecting, which I loved, I really respected that.”

Brice said that Johnson’s own passion for the podcast and his guests is energizing.

In the skateboarding community, Johnson said, you’ll find friends everywhere you go: just show up at any skatepark. Johnson said he thought this was exclusive to skateboarding, but found that whenever you share your passion, friends appear.

“When people then do something they really care about, that itself is a connection,” Johnson said. “When you talk to somebody who is passionate about the subject or what they’re doing, how can you not want to listen?”

Jacob Johnston, nurse and owner of The Medicine Pharm in Menomonie has listened to every episode of Passion Pod. Already a fan of the podcast when he met Chris Johnson; the two are now friends.

“Listening to people talk about their blueprint for pursuing their passion, it’s super inspirational,” Johnston said. “It’s always uplifting.  I always feel better after listening to an episode.”

Johnson’s goal for Passion Pod, he said, is to share the work of people who love what they do, using their stories to inspire change in others.

As the podcast grows, Johnson hopes to take it to a national level. Many episodes are recorded in Los Angeles and the show has taken him all across the country.

Passion Pod airs Sunday nights on Eau Claire’s Converge Radio, and Johnson is expanding to two shows a week, one to be specifically focused on local guests.

“Even though the show is growing, I never plan on moving away from Eau Claire,” Johnson said. “Eau Claire is my home, it’s where my heart is, and I want to do as much as I can to continue to build things in our community to make Eau Claire the best place it can be.”

Ultimately, Johnson said, he wants listeners to grow by listening to Passion Pod. He said the demographic he had in mind when creating the show were people who are still figuring out how they want to spend the rest of their life.

“People are capable of a lot more than they give themselves credit for,” Johnson said. “Anyone can do anything if you really set your mind to it and don’t take no for an answer. Just follow your passion.”

Passion Pod can be streamed on Apple Podcasts, Spotify and is broadcasted on Converge Radio 101.9FM every Sunday at 7 p.m.

For more information on Chris Johnson, Passion Pod, and the Passion Board Shop, find their Instagram @passionpod and website, passionboardshop.com

Sawyer Brice can be found at sawyerbrice.com and on Instagram @_soyr.